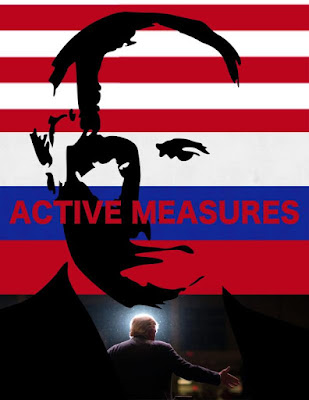 The constant barrage of information on Trump [election] campaign and his administration’s relationship with various shady yet powerful Russian nationals could have been attributed to the vivid imagination of an American espionage novelist, if not for the mountain of damning evidence hinting at deeper, darker truths behind the generally obfuscating reactions of Vladimir Putin and Donald Trump. In many ways, the alleged Trump campaign collusion with Kremlin and Russian election meddling were as incendiary as the Watergate Scandal that brought down President Richard Nixon. There might not be proof beyond a reasonable doubt of a criminal conspiracy on the collusion-interference case (yet), although the Special Counsel investigation of Robert Mueller has ignited flow of revelations whose implications are far scarier and deeply contentious in the history of American politics. Jack Bryan’s documentary Active Measures (2018) is the latest of chilling inquiry into American President’s indisputable connection to Russia; one that would actively inspire outrage and doubtfulness.

Having keenly followed (following) the developments on Capitol Hill and Mueller’s investigation I must say that Jack Bryan’s crash course on the greatest 21st century espionage story, beginning from Putin’s rise to political power and sustenance of that power, by relying on an inner circle of kleptocratic oligarchs, gangsters, money-laundering bankers, and unscrupulous political advisers, doesn’t offer anything shockingly fresh. Active Measures does a good job in weaving disparate threads of the Trump-Russian/Putin story that could well serve as a recap on the startling developments (so far). Just before starting Bryan’s documentary, I had finished reading Michael Isikoff and David Corn’s ‘Russian Roulette: The Inside Story of Putin's War on America and the Election of Donald Trump’, a sober and meticulous look at the nefarious Russian interference ploy. Metaphorically speaking, even as the ink on the investigative journalists’ report dries, the story has taken more twists and turns. But, what’s missing in Active Measures is the earnest, journalistic approach pursued by Isikoff and Corn. The documentary is heavily persuasive, and the assembled information is delivered in a delirious manner as the pulsating electronic music and assortment of high-profile talking heads displays a kind of urgency (much like social-media-fake-news) to instantly reach great number of the unsuspecting populace. 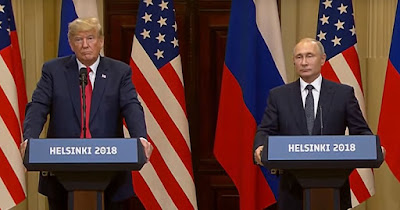 This whirlwind of devastating geopolitical maneuver by Putin and Kremlin is presented by Bryan through a team of notable figures, including Hillary Clinton, the late John McCain, and John Podesta. The title comes from what the intelligence community calls as key tactics from Russia to exert influence around the world (through propaganda, cyber-attacks, and centralized Russian power) despite the decline of its military and economic power. Director Bryan chronicles Putin's dirty work, starting from his ruthless treatment of former Soviet countries like Georgia, Ukraine and Estonia. He had unleashed Russian hackers, military and thugs to overturn democratic elections in the smaller nations, something the documentary (and various other news sources) attests as sort of experimental study before attacking the American elections. The narrative also strongly stresses on Putin’s dirty money, laundered by mobsters and oligarchs through real estate, particularly by buying the kind of overpriced condos Trump offers through his 30-plus towers around the world. Menacing mug shots of mobsters like Semion Mogilevich and Dmitry Rybolovlev, and oligarchs like Oleg Deripaska & Aras Agalarov are repeatedly displayed while extensively suggesting their operations to launder millions through untraceable shell companies. American-born British financier Bill Browder – the man behind Magnitsky Act which rattled Putin (strangely Magnitsky isn’t mentioned in the doc) – has already detailed how Putin how could very well be the richest man on the planet. 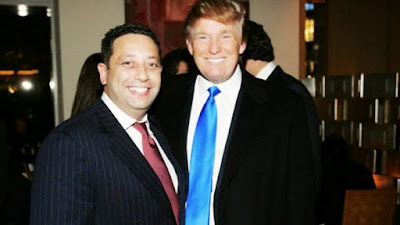 What’s more alarming was Trump’s alliance with seedy figures like Paul Manafort, Michael Flynn, and Michael Cohen. Their dastardly schemes are damning in itself, especially Flynn’s ironical and hypocritical ‘Lock her Up’ chant during the election campaign, while he was deeply involved in duplicitous plans. Nevertheless, the frustrating thing about Jack Bryan’s approach is the choice to present host of documented facts alongside hearsay and overly familiar tidbits. In Isikoff’s book, Putin’s alleged origin story (as said to be) uttered by himself to Hillary Clinton is just a simple event used to glimpse at the man’s myth-making skills. But director Jack Bryan brings HRC to reiterate the story using old pics of Nazi menace (Clinton in one of her digressions about Putin calls him as the guy who likes ‘to manspread’). The strangely funny tidbit here becomes a foreshadowing element for Putin’s agents of influence. Nuance seems to be a farfetched word in the whole documentary. There’s a former Miss Hungary telling how Trump once invited her to his hotel room. It’s a big question what the film gains by reiterating the very familiar faulty nature of Trump with regard to his connection with Putin. Hence at certain point, the loud declamations by the interviewees become more propagandistic in nature. In fact, Bryan’s presentation of the outlandish claims mixed with true facts is too flashy that there is not much difference between his style and news agencies like RT and Sputnik (the propaganda outlets of Kremlin). Overall, Active Measures (110 minutes) lays out the dreadful issues afflicting current American political arena, albeit in a lopsided (conspicuous) manner that could be cherished more by those with little or no knowledge of possible Trump-Russia Collusion (and of course ardent supporters of Trump may still find it hard to digest the facts).