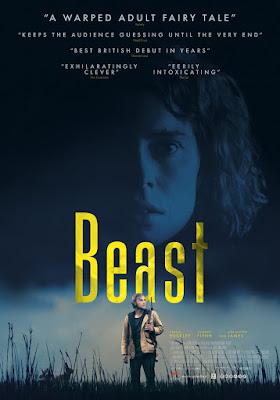 Michael Pearce’s moody psychodrama Beast (2018), riffing on themes of identity, guilt, love and innocence, opens with its besieged, red-haired (27-year-old) protagonist Moll Huntford (Jessie Buckley) singing in a church choir. The choir master, who also happens to be Moll’s mother (Gerladine James), stops the singing and asks Moll to raise her voice and keep up with the vocal harmony. Later, in the day, Moll receives guests at her suburban family home, situated in a picturesque yet oppressive coastal small-town. The occasion is Moll’s birthday. She brushes off unwanted advances of a local police officer named Clifford (Trystan Gravelle) with fake smiles and uneasy pauses, while Moll’s sister announces her pregnancy to the gathering, hijacking the celebrations and wishes for herself. Instantly we sympathize for Moll, who is the odd-one-out at choir, an outsider at her own party and treated as one by her family.

Moll works as a tour guide on tourist buses, a job of course the sheltered girl dislikes. To vent her existential anxiety evoked by the birthday-party, Moll runs away to a nightclub, dancing all-night with a stud. In the morning, he walks Moll to a remote section of the beach and makes a move on her, a little forcefully that may undoubtedly lead to rape. He is interrupted by a gangly young man with a hunting rifle. He is an oddball named Pascal Renouf (Johnny Flynn) and emits an earthy sensuality which Moll feels attractive. Pascal says he is a native and calls himself a craftsman. Naturally, the stern mother who likes to keep Moll’s passion and desire on a leash disapproves her daughter’s choice for a boyfriend with subtly condescending gestures. At one romantic occasion, Pascal takes Moll to the top of cliff pointing towards the intimidating sea. The magnificent view, the warm sun, red wispy hair of Moll waving in the gentle breeze, and intense looks of Pascal makes the passionate kiss inevitable, sealing their bond. Going from such a description, Beast might seem to be a very simple story of lonely, ostracized souls finding each other. But this internal journey of Moll is not only populated with sun-glided visuals, but also plagued by predatory and feral instincts. 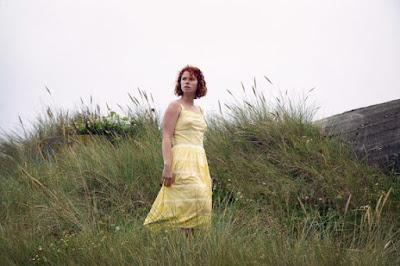 The small-town inhabitants are unsettled by the serial-killing spree, targeting the island’s teenage girls. Three girls are abducted and found brutally murdered, and a fourth one is already missing. It is when these tensions and paranoia is flaring up, Moll meets Pascal. She could very well be the young girl wearing a red riding cloak and Pascal the Big Bad Wolf. However, Moll is already written off as a ‘bad girl’ by the town residents (she is home-schooled due to a violent mistake made during her teenage years). So, she’s not sweet and shy virgin methodically stalked by a monster. She often finds empowerment by exhibiting the passions forbidden by her politely cruel mother. This is shown when Moll vigorously kisses Pascal on an empty field during nighttime. She pushes him to the ground and gets on top of him. In the next scene, Moll sits at her living room sofa, her skin streaked with soil. In these moments, the animalism lurking beneath Moll’s frail stance comes to the fore. Subsequently, when Moll learns Pascal is not all he claims to be and faces town bullies’ unchecked rage, the torrid, dark energy within the young woman plays a pivotal role. Caught in-between the struggle to find moral footing and resist animalistic attraction, Moll’s descent into darkness is emotionally and visually rewarding. 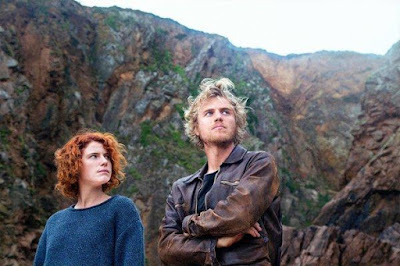 Beast is an accomplished debut feature from Michael Pearce that is neither a tale of romance nor a serial-killer thriller. It’s a tragic and tense character study, set in a beguiling landscape that is at once eerie and ethereal. The ‘bad-girl-meets-bad-boy’ trope has offered a very familiar sub-genre of crime flicks (Kalifornia, Natural Born Killers to state few examples). But Pearce in his treatment of bucolic surroundings with respect to the protagonist’s existential agony brings to mind Terrence Malick’s debut feature Badlands (1973). Both the central characters are wonderfully ambivalent, with Buckley’s Moll easily dominating the film. Buckley perfectly crafts a portrait of a repressed girl, craving for a cathartic discharge. The subtlety with which she reveals joy, vulnerability, and rage delivers a decisive emotional impact even when the narrative takes familiar paths. Flynn brings an aura of intrigue and mystery to Pascal, keeping us on edge about whether we should be worried about him or not.

Working with cinematographer Benajamin Kracun, director Pearce conjures a sense of oppression and isolation from the sweeping coastlines’ scenic beauty. This purposefully non-tourist gaze makes Moll’s literal isolation resound in her surroundings. When Moll rebuffs her family’s snobbish behavior towards Pascal, we see a shot of huge waves clobbering the lovers. This tactic of using landscape as a conduit for Moll’s feelings or to set the lovers against the world pays good dramatic dividends (Pearce also does well with the wild nightmarish sequences).  Overall, Beast (106 minutes) makes up for what it lacks in originality through assured direction, layered writing, and Jessie Buckley’s mesmerizing performance. It’s a slow-burn fable, observing the limits of love and the darkest corners of evil.