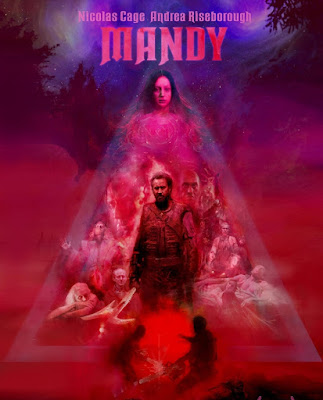 Italian-Canadian film-maker Panos Cosmatos’ Mandy (2018) is a lean and blunt phantasmagorical feature, permeated with absorbing candy-colored nightmarish sequences. The narrative is set against a pine forest and the central characters live in a wondrous wood-house, in harmony with the environment near a placid lake. It kind of takes the story out of the real and places it in a metaphorical scene. Furthermore, the exercise in high style and archetypal landscape produces an artistic lens to observe the violence and visceral madness far removed from reality. Of course, Mandy is decadent, gory, and ludicrous. Yet it’s uniquely psychedelic visuals combined with perfectly channeled mad-dog performance of Nicolas Cage offers a satisfying surrealistic revenge flick.

Mandy starts off as a pastiche, but thanks to seriously bizarre and hypnotizing visual delights Mr. Cosmatos transcends the pastiche into a marvelous midnight movie that’s worth a cult following. The setup here is that Red Miller (Nicolas Cage), a lumberjack, leads a quiet life with his eponymous wife/girlfriend Mandy (Andrea Riseborough), a skinny young woman who has the haunted looks of Shelley Duvall (‘3 Women’, ‘The Shinning’). The year is 1983 and he is tattooed and has the looks of a ruffian, while she sports a big facial scar to suggest some kind of encounter with violence. Although we never quite come to understand how they found each other, we could instinctually feel that Red and Mandy are tragic, downcast figures who have attained solace by removing themselves from civilization. The literal and metaphorical isolation intensifies the perfection of their match. When Red’s at work, Mandy focuses on her weird fantasy art with impeccable other worldliness.

As expected, the couples’ blissful, idyllic existence is interrupted by ‘Jesus-freaks-cum-weirdo-hippie-types’. Mandy catches the attention of the leader of a LSD-fueled religious cult named Jeremiah (Linus Roache). With the help of a coven of demonic bikers (known as ‘Black Skulls’), the Manson-esque cult leader abducts Mandy and wreaks infernal pain upon Red. When Jeremiah’s attempts to seduce Mandy go wrong, the inevitable thing happens. Up until now, the fever dream of a narrative moves deliberately slow, imparted with tinseled image and gorgeous retro score. Then Nicolas Cage’s Red is set loose. It is indicated in the scene where Cage’s Red, wearing only underpants and a t-shirt with an image of a fierce tiger, gulps vodka in a bathroom, weeping and hollering at the same time and gradually preparing himself for the unrelenting journey for vengeance. Red fires himself up with drugs, forges an axe-knife weapon combo and travels into the heart of craziness. The path might be very conventional in terms of narrative, but willing audiences might find twisted sort of relish in observing the crushed, severed heads, the chainsaw combat, etc. 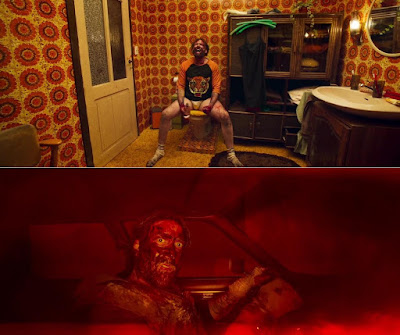 Shot in hot ochre, scarlet red and cool blue, with its near-mute protagonist avenging for his soulmate, Mandy has the plot of a grind-house feature, but it's paced like a restrained art-house work. Not all viewers might find it easy to get into the film-makers’ head-space and process the assortment of delightful imagery on its own terms (those who do will definitely be raving about it). Although Mandy derives a lot from 70s/80 occult-horror and infested with Lynchian aura, the very recent point of references could be Nicolas Winding Refn’s films. Furthermore, it looks like a fitting companion piece to Coralie Fargeat’s Revenge. But unlike ‘Revenge’ (a wildly different take on rape-revenge flicks like ‘I Spit on Your Grave’), Mandy isn’t a revised taken on the traditional self-destroying hero. Eventually, Cosmatos’ movie is about nothing other than Nicolas Cage gritting his teeth in rage. Mandy is as much a heavy and warm nostalgia special like Stranger Things. Only that Cosmatos’ nostalgia for the 80s is grimy, twisted, and backed up by sick sense of humor. Whether it is chainsaw deaths or gruesome decapitations, Nicolas Cage’s staggering, over-the-top performance adds a palatable zestfulness to the proceedings. The late Icelandic composer Johann Johannson’s ominous doom-metal influenced soundtrack also perfectly sets the film’s engrossingly decadent tone without ever assaulting our senses.

With fantastically effective sci-fi ‘Beyond the Black Rainbow’ and mesmerizing cult horror ‘Mandy’, Panos Cosmatos has strongly elevated himself into an intriguing schlock auteur. Cosmatos's eye for constructing the look of films is highly commendable, even though the meaning derived from his flicks are largely opaque and nonsensical.