Ariel [1988] – A Distinctively Bittersweet Drama from the Minimalist Master

Finnish auteur Aki Kaurismaki’s tightly controlled cinema mostly surveys the bleakness in human existence of proletarian or downtrodden variety; not that his bleak vision of Helsinki city is drenched in miserabilism. Mr. Kaurismaki instead uses black, deadpan humor and a sense of unreality to tackle the grimness of the social situation. It is this exacting focus on darkly funny absurdities that plagues his chain-smoking dispossessed people endlessly appeals to me. The proletariat trilogy - loose triad of movies concentrating on the down-on-luck working-class protagonists - made Kaurismaki popular among the cinephiles and film-makers around the world (American indie film-maker Jim Jarmusch has repeatedly championed his films). Shadows in Paradise (1986), Ariel (1988), and The Match Factory Girl (1990) are all minimalist tragicomedies, whose heroes are garbage-picker, miner, and assembly-line worker respectively. Ariel is the most sweet-natured, hopeful tale among the three, while my favorite is Match Factory Girl, a savage comedy that’s often compared to the top-notch works of Robert Bresson. 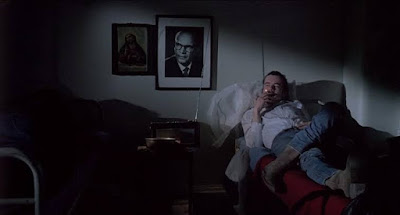 The funny quotient of Kaurismaki’s dramas lies in the deadpan dialogue delivery. All his actors carry a stony face and the emotions of love, sadness, anger, and desire never bursts through this hard surface. But Kaurismaki never reduces them to a parody or makes fun of them. On the contrary, their silent determination beneath the tight-jawed expression makes them lovable. Taisto Kasurinen (Turo Pajalo) in Ariel is one such adorable straight-faced guy. The rural coal mine where he works is closed and before long his miner father commits suicide. Taisto withdraws all his life’s savings from the bank, and takes for the city in a white Cadillac controvertible whose top won’t close.

Shortly after reaching the city, he is hit over the head with a bottle by couple of hooligans and the guy’s entire savings robbed. This is just one in the string of misfortunes that await Taisto. But he also finds love with Irmeli (Susanna Haavisto), a single mother working multiple jobs. They meet in a typical Kaurismaki-ian fashion: Irmeli works as meter maid and serves Taisto a parking ticket. Then they have dinner. He drops him at her apartment, waiting for her to ask him to spend the night. She says I’m divorced and have a little son, to which Taisto replies that he wouldn’t mind a ready-made family than making a family of his own. Since it has already become dark, Irmeli invites him. They go to bed and later Taisto smokes before sleeping. 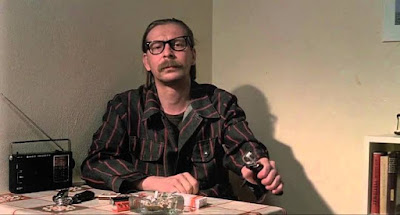 These exchanges that utterly lack a touch of emotion or irony, however, aren’t similar to the emotional detachment found in the film-makers of Greek New Wave, particularly Yorgos Lanthimos. The dead-end existences lead by Kaurismaki’s characters doesn’t provide due emotional outlets to express their inner spirit. Nevertheless, these people’s warmth and humanity are subtly suggested in their little actions which dispense cruelty and listlessness of the hermetically-sealed dour surroundings. Very soon, Taisto, Irmeli and her boy Riku become a family unit, but Taisto’s luck doesn’t hold out for long. He ends up in jail under a false charge. Matti Pellonpaa, Kaurismaki’s regular actor, plays Mikkonen who shares the jail cell with Taisto. Interestingly, not much difference is seen in the dispassion found outside and inside the prison. Subsequently, the pair plots to get out of jail, get entangled in a bad deal with seedy men, rob a bank, and eventually decide to flee the unremittingly bleak situation for a distant, alleged paradise.

Plot wise, a lot happens in Ariel (from whirlwind romance to prison-break and violent confrontation), although as usual Kaurismaki’s minimalistic, subversively funny tone pares-down the grand dramatic upheavals. Kaurismaki often mixes gritty realism with his own wish-fulfillment fantasies. This oxymoronic approach is best found earlier while perceiving Taisto as an unemployed victim of oppressive socioeconomic system and later when Taisto becomes a film-noir hero (a reference to Humphrey Bogart starrer ‘High Sierra’ is made earlier) who dreams of escaping to a faraway dreamland. The perfect inclusion of soundtracks once again plays a pivotal role in the narrative. 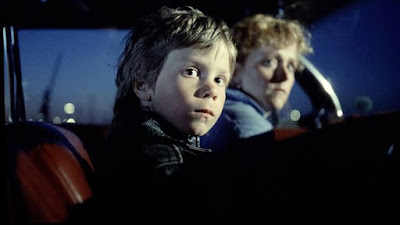 The songs & music offer emotions where it is drained of any color (the Finnish rendition of Wizard of Oz’s ‘Somewhere over the Rainbow’ is played towards the end when the fugitive and family looks at the cruise ship, giving us the taste of their yearning and optimism). Remarkably shot by Kaursimaki’s regular DP Timo Salmonen, the distant, stationary camera placements never tries to glamorize the poor proletarians. Unlike Dardenne brothers or Ken Loach, Aki Kaurismaki doesn’t try to acutely highlight the resilience and miseries of proletarian population. He simply wants us to feel the absurdity of such a drab existence, a life without hope made possible by dispassionate bureaucracy. Once the director conveys this aspect, he seeks for a kind of liberation for his characters that’s unfettered by reality. The liberation could be sweet as in Ariel or savage as in Match Factory Girl.

Overall, Ariel (72 minutes) represents one among the many triumphs of Aki Kaurismaki’s minimalist film-making methods. The director’s captivating cinematic economy must be championed in this era of sensory and visual over-load.

Please keep adding ur work, i am a big fan of your work. And this is a only site where one always find his answers with respect to movies.

Thanks a lot for the supportive comment Venkatesh. Keep visitng.