The Witch: Part I. The Subversion [2018] – Formulaic Yet Gripping Action/Fantasy

Park Hoon-jung’s first installment of a proposed action/thriller trilogy, The Witch: Part I, The Subversion (‘Manyeo’, 2018) opens on the aftermath of a bloody massacre, inside a supposedly top-secret government building. An eight-year old kid’s escape scheme is hinted to have left the trail of mangled bodies. However, the facility’s matriarch Dr. Baek (Jo Min-soo) navigates the blood-splattered stone corridors with the enthusiasm and zeal of a mad scientist. To her security chief’s (Park Hee-soon) dismay, Dr. Baek feels she has been proven right about the girl’s supreme powers. At the same time, the mad doctor assures the little girl can’t survive on her own. A boy who also has escaped amidst the chaos is recaptured and since the opening credits display some images from real-life experiments on children, we can easily understand the purpose of the facility and nature of the ‘children/monsters’. 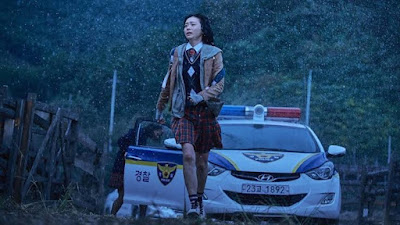 Thwarting Dr. Baek’s expectations, the gravely injured 8-year old girl Ja-yoon is found by a bereaved middle-aged couple (Choi Jeong-woo and Oh Mi-hee) in their farm. Ja-yoon grows up as an innocent, farm girl and maintains that she has no knowledge of her previous life. Ten years later, the high-schooler Ja-yoon (Kim Da-mi) is seen helping her father with his financial setbacks and takes care of the frail ma, who is facing early onset of Alzheimers. Ja-yoon is smart and shy, and spends most of her time with her chatty and greagrious friend, Do Myung-hee (Go Min-si), the local sheriff’s daughter. In order to tackle the family’s financial conflicts and to acquire money for ma’s treatment, Ja-yoon tries her chances at a televised singing contest. Apart from presenting her winsome voice, Ja-yoon makes the audiences go wow by doing some ‘magic tricks’. 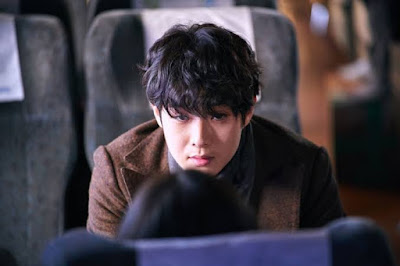 Ja-yoon’s TV appearance naturally triggers a reaction from Dr. Baek. She sends her own posse of young, hyper-stylish, and super-evil masterminds, spearheaded by the same boy (Choi Woo-shik) who gets recaptured in the opening scene. While Ja-yoon accompanied by Myung-hee takes a train trip to Seoul in order to attend the contest’s next round, the boy quietly threatens the girl and even calls her a ‘witch’ (and when enraged he makes it rhyme with ‘bitch’). After winning the quarter-finals, Ja-yoon almost gets kidnapped by guys wearing black-suits. Two factions seem to be after Ja-yoon: one is group of supernatually gifted youngsters; the other is lead by scarred security chief who just wants to kill the escaped monster. When the situation escalates to a point that puts Ja-yoon’s family and friend in harm’s way, she reacts in the only way she is trained to; within a matter of seconds men sporting guns lie under pool of their own blood. Subsequently, Ja-yoon reluctantly agrees to meet her maker and sort things out. 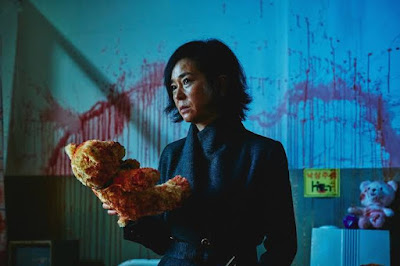 There’s nothing truly surprising or original about ‘The Witch’. Twists, emotional highs, and bursts of explosive action are all packaged in a way that could be easily predicted by seasoned movie buffs. Transhumanism, telekinesis, psychic power have been turned into pop-corn entertainment many decades before, the fight for mutant rights in Marvel’s (1960s) X-Men comic series served as a parallel to the American civil-right struggles of the 1960s. From Stephen King novels, manga series, X-Men movies to TV projects like Legion, The Gifted, Stranger Things, the genetically-modified superhuman ferocity was unleashed for our entertainment in many different ways. The Witch is pretty much an origin story that’s derived from all these sources and many more. At times, the movie gives off a vibe of watching the pilot episode of a multi-season TV series; the characters are cool enough to hold our attention but their actions don’t make any sense. Yet for all its familarities and flaws, The Witch works to an extent because of Park Hoon-jung’s well-paced direction and Kim Da-mi’s mercurial, star-making central performance.

Writer/director Hoon-jung commenced his movie career by writing the screenplay for Kim Jee-woon’s I Saw the Devil (2010). Among his four directorial efforts before The Witch, New World (2013) and The Tiger (2015) were decent entertainers, comprising of superb ensemble cast. Hoon-jung’s strength lays in concocting melodrama of the darkest variety which he does pretty well in the first-half. The slow dramatic build-up pays off wonderfully with the whirlwind of literally wall-breaking action in the second-half, set mostly inside a claustrophobic underground bunker. And the final revelation has all the perfect makings of sequel bait. The very Korean on-screen idiosyncrasies (casually brutal bad guys, bigmouthed sidekick, etc; and let’s not forget ‘boiled eggs with 7-Up’) add up to the narrative’s charm. Kim Da-mi is good throughout different display of moods. She is especially fun to watch when she dispenses minions, high-level thugs and bosses with unmatchable suave. Overall, The Witch: Part I, The Subversion (125 minutes) is derivative yet delightfully crazy.