Drifting Clouds [1996] – Battling the Pangs of Unemployment with Deadpan Wit

Drifiting Clouds (Kauas plivet karkaavat, 1996) is the first installment in Finnish master of melancholy Aki Kaurismaki’s so-called ‘Finland Trilogy’. It was supposed to be a direct sequel to Kaurismaki’s first internationally acclaimed feature, Shadows in Paradise (1986). But after lead actor Matti Pellonpaa’s death – who collaborated with Aki Kaurismaki in nine films – the script was extensively re-written. It saw Mr. Kaurismaki once again employing his minimalist aesthetics to deeply ponder the miseries of working class while offering some uplifting fictionality. Drifting Clouds was made at a time when Finland’s economy underwent deep depression, a result of bad luck and bad policies. The ordinary working-class couples at the centre of the movie are also plagued by bad luck and victimized by bad policies.

Karuismaki regular Kati Outinen plays Ilona (the same name given to female lead in ‘Shadows in Paradise’), a straight-laced head-waiter at the Dubrovnik; a once fashionable resturant that’s now only frequented by elderly people. Other Kaurismaki regulars, Sakari Kuosmanen and Markku Peltola plays the doorman and a alcoholic cook respectively, whereas veteran Finnish actress, Elina Salo plays the melancholic boss of Dubrovnik, Mrs. Sjoholm. Ilona’s husband , Lauri (Kari Vaananen) is a tram driver. Every night after work, Ilona waits for his tram to pick her up. He finishes the route, and they drive to their modest apartment together. A adorable terrier is the third member of this family. 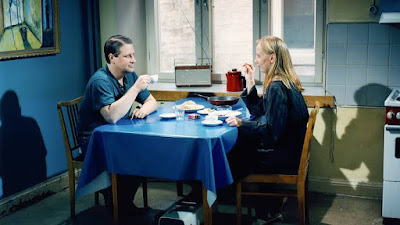 Although Kaurismaki’s stone-faced actors deliberately shies away from expressing emotions, he allows simple minimalist gestures to deeply broadcast the nature of their relationships. Like the French master of cinema Robert Bresson, Kaurismaki’s spare mise en scene, places his characters in situations and sublimely aestheticized spaces, and allows the viewers to bring his/her emotions into the scene. The rich static frames of Ilona & Lauri’s domestic space bursts with life and texture which reminds us of the works of Kaurismaki’s spiritual predecessor, Yasujiro Ozu. Later, the characters’ moribund miserabilism are excruciatingly conveyed through various shades of blue.

Lauri gets infected with bad luck. He picks up the lowest card when his boss announces personnel cutbacks through lottery. Lauri doesn’t reveal the bad news of pink slip to his wife until after his last day at job. He grumpily exits from a theatre before the movie is finished with Ilona trailing behind him. In the theatre lobby, we could see posters of Bresson’s L’Argent (1983), Jean Vigo’s L’Atalante (1934), and Jim Jarmusch’s Night on Earth (1991) [Mr. Jarmusch paid tribute to Kaurismaki by setting one of the vignettes in ‘Night on Earth’ in Finland and he recruited Matti Pellonpaa to play a role]. Looking at Lauri’s reaction it might definitely be some Hollywood movie (and Ilona suggests the film is good). Then Lauri walks to the cashier and angrily demands for his money to the girl behind the counter. Outside the theatre Ilona and Lauri engage in deadpan conversation which pretty much defines Kaurismaki-esque sense of humor:

Lauri: It was nonsense. A comedy? Didn’t laugh once.
Ilona: It’s still not the cashier’s fault.
Lauri: At least I took out my bitterness
Ilona: She is your sister though
Lauri: All the worse for her. 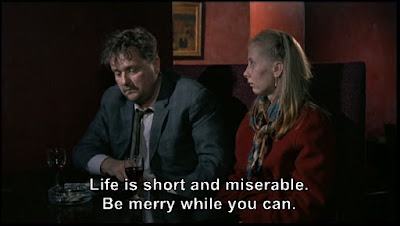 Kaurismaki allots more time to showcase Dubrovnik’s disintegration and the melancholy that follows due to collapse of working-unit. As usual, the film-maker uses a brilliant elegiac song to echo the feelings of the characters (“…our faded dreams brings tear in my eyes…”). The unemployed Lauri is consumed by depression and alcoholism, especially when he fails a medical test that totally robs the prospect of working as a driver. Ilona buries her pride and is prepared to take any job in restaurant kitchen. It leads to another darkly humorous, shot-reverse-shot conversation between Ilona and a world-weary restaurant manager (Esko Nikkari).

Ilona: I started as dishwasher, then kitchen maid, then waiter until I got to be a head waiter. I could still be a waiter, anything.
Resturant Manager: to be honest, you're too old for a waiter.
Ilona: I'm thirty-eight.
Manager: That's it. You can drop dead anytime.


The scene may also hint the way Kaurismaki is processing his friend and collaborator Matti Pellonpaa’s death (due to heart attack in July 1995). In another scene, we see Ilona sadly gazing at a photo frame of a child. Its’ a very simple shot (conveying the information about the child they have recently lost), yet one which adds extra-layer of melancholy to the couples’ suffering to eke out a dignified existence.  Kaurismaki also uses this shot to pay homage to Pellonpaa – the child in the photo. Ilona chooses to not delve into the depths of despair (unlike Lauri) even though she faces more cruelty under the hands of a crooked diner owner (who absconds tax payments). Comically hostile bank manager thwart her aspirations to start  a restaurant (with her former colleagues). Eventually, Ilona runs into her former boss, Mrs. Sjoholm who agrees to provide the fund. The narrative ends with Kaurismaki granting a degree of autonomy to the couple, and a austere yet beautiful shot which defines the movie’s title in a fascinating manner. 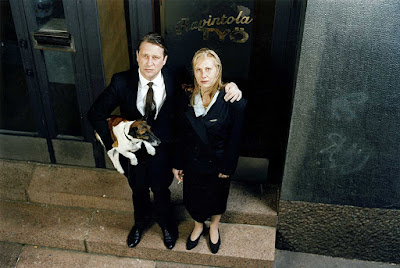 The story-lines of Aki Kaurismaki’s cinema may sound melodramatic, but through perfect fusion of austere formalism and emotional resonance (coated with deadpan humor) the melodrama is effectively drained, leaving a restrained vision of human suffering. That’s obvious in the manner Kaurismaki stages his characters’ reaction to the quotidian traumas. Through a certain acting style and cinematography, Kaurismaki zeroes-in on wounded psyche without turning them into a object of pity. By de-emphasizing the depiction of emotions, he foregrounds the characters’ unspoken trauma. The shot showing the photo of Ilona-Lauri’s deceased child is a perfect example of this method.

Kaurismaki has also got an eye for absurdist humor that naturally emnates from our inability to deal with trauma. However, his minimalist techniques immerses us so much into the working-class characters’ emotional spectrum (we project our own emotions into him/her) that the few laughs (directed at them) doesn’t rob them of their dignity. Moreover, since Kaurismaki maintains such a low-key tone and repeatedly puts these stern-faced  people through the wringer, the upbeat, fairy-tale-esque story turns offers great delight. He may make films about alienated, distressed individuals, but they are strangely comforting and incredibly uplifting.