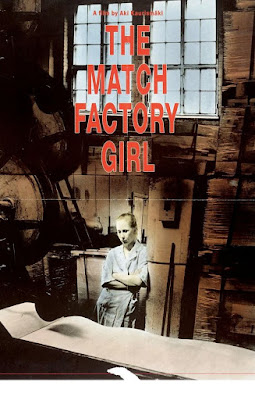 
“When you give everything only to find disappointment, the burden of memories gets too hard to bear……”


“Oh, If only I could reach that dreamland some day. Then I’d never, ever fly from that paradise away. But, no, unlike the birds, I’m a prisoner of Earth………”


There exists an inherent urge within all of us to express ourselves or identify ourselves through music & songs. Music is something that embodies all the universal themes of what it means to be a human being. Our feelings of love, joy and heartbreak resonate beautifully or soulfully when words move in rhythm. Those aforementioned lines are taken from a musical performance used in masterful Finnish film-maker Aki Kaurismaki’s fascinating and sharp dark comedy “The Match Factory Girl” (1990). The singer yearning for a ‘dreamland’ or soliloquizing about the eternal human ‘disappointment’ says a lot about the movie’s central character Iris, since she is a woman totally unable to assert her feelings through words. If not for those lamentable lyrics, we would be lost in Iris’ rigid, drab universe.


“The Match Factory Girl” opens with a quote from French author Sergeanne Golon’s ‘Angelique’ series books. The quote reads, “Most likely they have died of cold and hunger. Far away there in the middle of the forest.” The relevance of ‘Angelique’ is bit hard for me to connect with Iris, although we see Angelique book series in the bookshelf of the movie’s protagonist. Critic Anton Bitel of ‘Eye for Film’ offered the meaning. Countess Angelique is the primary character in the series of period novels, which is all about a young woman taking up revenge on those who have done her wrong. With Iris eradicating the ‘rats’ in her life towards the end, we could understand her relation with Angelique. But, unlike the countess figure from period novel, Iris’ life style lacks the epic quality and more or less drenched in gloomy pessimism of modern Scandinavia. 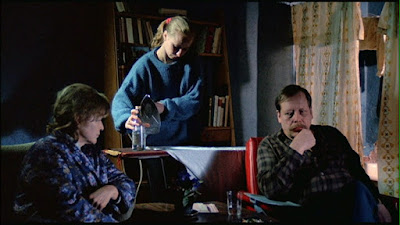 Despite the ‘girl’ in the title, Iris (played by Kati Outinnen – one of the actors to best personify what we could call as ‘Kaurismaki glumness’)  is actually a woman in her late twenties (or may be early thirties). The opening sequences showcase the process for manufacturing and packaging matches - from wood log to match boxes. The dull, monotonous humdrum of the machines is perfectly matched by pale-faced Iris, whose job seems to make sure that the labels atop the matchboxes are firmly affixed as those roll past her in assembly line. The Helsinki woman’s house address is ’44, Factory Lane’. Hence the monotony prevalent at the factory plagues her at home too. She cooks, serves food to emotionally drained mother and step-father, cleans, reads and sleeps. Each and every moment at home is imbued with the same precision of machines at factory. Well, of course Iris is ready for a change. She applies make-up and decides to visit a local dancing hall, where she is left alone solemnly, watching with her washed out face, at other dancing pairs. 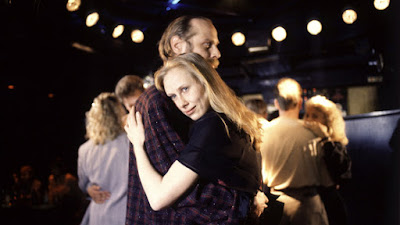 Iris’ face doesn't suddenly restore color even though she wants a change. But, then she buys up a red dress after receiving the monthly salary to add up some color to her life. In the salary envelope cover she gives to mother, the bill for the dress is placed. Mother and step-father looks with shock as Iris shows her beautiful red dress. Step-father slaps, calling her ‘whore’ (and this is the first line spoken by step-father in the film and the whole narrative is said to have only 24 dialogue lines). Despite parents’ disapproval, Iris goes to music bar in the red dress, desperately searching for a dancing partner. She finds a man named Aarne, a well-to-do businessman. He takes Iris to his posh apartment and leaves up some money in the morning as Iris is still in her rejoiced, slumber state. She leaves him her phone number – the one at the factory, but she receives no call. Iris runs up to Aarne’s apartment to coerce him for another date, which only brings her huge heart-break. When Iris learns about her pregnancy, Aarne asks her to ‘get rid of the brat’, while her parents kick her out. The desolate Iris finds shelter with her elder brother, although no one offer her consolation. Rather than immerse herself in misery, Iris decides to take revenge on humanity, or on the in humaneness of this world. 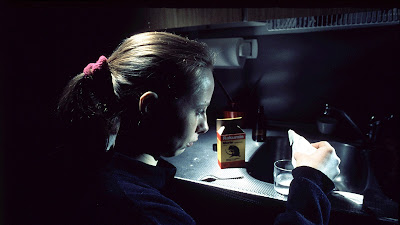 “The Match Factory Girl” is the third film in Kaurismaki’s “Proletariat Trilogy” (“Shadows in Paradise” (1986) and “Ariel” (1988) are the first two) and in these three films, Kaurismaki neither heightens the nihilistic activities of his proletariat protagonists nor does he exhibit them as a pitiful dupes of the rigid socioeconomic and cultural system. It could be absolutely grasped from Kaurismaki’s fixed camera placement, where the shots are mostly in medium-to-full range. He keeps us at some distance from his characters and then infuses dead pan humor to make us think about the functions of these lives. The humor rises from dreary existence of the workers, which is in no way shown as a mocking commentary. The film-maker displays how the routine lifestyle of the workers forgoes hope and at the same time observes how the proletarians have no other way than to walk into this socioeconomic trap. The chunk of dry humor in “Match Factory Girl” arises in situation when Iris decides to do away with her innate humanity to match-up with the in-humaneness. 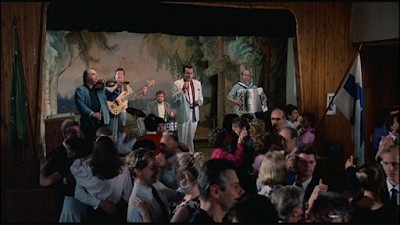 We could predict that the first stop for Iris with a rat poison would be to Aarne’s abode, but unpredictably her next victim is some random guy at the bar. He sits next to her and sizing her up. She smiles pouring in something into the guy’s drink. The guy smiles, may be because he think that the woman is spiking up the drink for his benefit. The last stop of Iris is at her parents’ house and once again in order to maintain the wry humorous tone, Kaurismaki doesn’t show them gulping the drink or wailing in death throes. In the end, Iris’ darkly humorous transformation isn’t about portraying nihilistic ideals; it is more or less an act of revenge on the emotionally numbing routine of her life. Of course, the parents, Aarne and an anonymous man have sacrificed their life, but what Kaurismaki wants us to concentrate on, through the dry humor, is on a life that has no possibility of improvement or escape.

Eventually, Iris has decided that a literal prison is far better option than a figurative prison. In the final frames of the movie as Iris is calmly walked away by the law officials from her work, we hear these lines from a melancholic love song - “When you give everything only to find disappointment, the burden of memories gets too hard to bear” - above the humdrum of machine. And we could understand how this idealized romantic song have deeply influenced Iris’ general idea about good life – the one which she is perpetually denied.

“The Match Factory Girl” (68 minutes) is one of Aki Kaurismaki’s wickedly incisive works about the industrialized, contemporary society’s dispassion, cynicism and alienation.