Like Yasujiro Ozu, Finnish auteur Aki Kaurismaki basically tells the same stories again and again. And similar to the works of the masterful Japanese film-maker, the repetition and familiarity in Kaurismaki’s works bestows more pleasure than boredom. Of course, many might be left puzzled by the style and sensibility with which the film-maker stages his stony-faced tragicomedies. Yet the profound stillness I observe in his scenes-- including the still human body-- says something interesting about the implacable void surrounding the lives of modern human beings, and goes on to challenge the ideological and economic mores of the ‘globalized’ society. 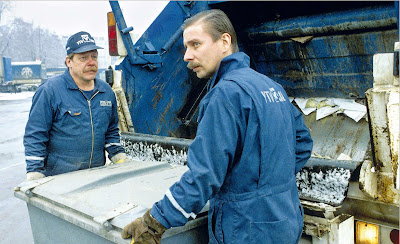 The list of distinct aesthetic choices, motifs, and character sketches prevalent in Aki Kaurismaki’s features came to sharp focus starting from his third feature film, Shadows in Paradise ('Varjoja paratiisissa', 1986) – the first part in his unofficial ‘Proletariat Trilogy’. Kaurismaki’s protagonists are often ordinary working-class outcasts of Helsinki. Though Kaurismaki emphasizes on humanism and strives to find glimmer of hope, some can find his worldview to be decidedly acerbic as social injustice and existential frustration persistently consumes his quirky, reclusive blue-collar characters. Shadows in Paradise, however, flit between a tone of droll comedy and poignancy. You could even say that reclusiveness, reticence, and depression were never treated with such an undercurrent of humor (without overtly making fun of the misfit characters).

Shadows in Paradise, similar to the director’s recent works (Le Havre, The Other Side of Hope), take fanciful turns and possesses a fairy-tale like quality, unlike his grimly funny The Match Factory Girl (1990) - clearly his best work, in terms of both style and theme. And Kaurismaki often attempts to show what the severities in a sterile work environment can do to a soul. But the writer/director uses blunt, wry humor to distill some of the bleakness prevailing in this type of human existence. The humor employed occasionally laughs at the characters’ efforts to dispel the gloominess in their life (leading to them seeking life companions). But despite an allegedly caricatured or stereotypical portrayal of Finnish solitary soul, Kaurismaki gradually and movingly zeroes-in on his character’s yearning for real human connection. 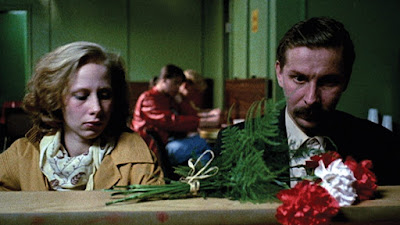 Shadows in Paradise revolve around garbage man, Nikander (Matti Pellonpaa). His elderly compadre at work invite Nikander to join at the new garbage company he’s about to open. In one of their cheerless exchanges, the older man says, “I’m not going to die behind a wheel”. “Then where?”, asks Nikander, to which the other curtly replies, “behind a desk.” Nevertheless, on a work day the older man keels over and dies due to heart attack. Naturally, Nikander consciously wakes up to the fact of his ridiculous existence. Out of desperation, he makes advances on the sad-eyed, washed-out blonde, Ilona (Kati Outinen), who works as the check-out assistant at the local supermarket. Nikander, however, only messes up his first-date with Ilona as he takes her to a scruffy place to play bingo. Probably not as bad as Travis Bickle’s choice of place for first-date, but still Ilona bursts out of the place. But when Ilona finds herself in trouble at work, she turns to Nikander, who takes her out to dinner.

Before long, Ilona moves in with him. Since she has nowhere else to go (having lost the job), it seems like a relationship of convenience than one born out of tenderness and love. Much of the bittersweet quality in the narrative comes from Nikander and Ilona’s inability to communicate with each other; to burst the bubble of their solitude. The drab, working-class environments of Helsinki comes off as a significant character, keeping the lonely souls confined within the environment; the couples’ attempt to enter into to the posh-restaurant for a date doesn’t happen (in another scene a hotelier working at a decent hotel lists room prices to homeless Ilona, only to eventually say that they are out of rooms). The alienation and loneliness, however, keeps bringing them both together, if not to seek romance at least to discern the contentment in human connection. Kaurismaki also gifts these battered souls a happy ending; his own way of scoffing at the goddamn reality.

Aki Kaurismaki perfectly pruned-narrative might strictly revolve around the proletarians, but the deadpan irony and the absurdist streak encountered in his oeuvre is pretty similar to the cinema of Jim Jarmusch (in fact, Mr. Jarmusch has cited Kaurismaki as an influence). The two independent film-makers weave their own brand of visual poems on social alienation, the narrative unfolding amidst worn-out industrial settings (seedy apartments, dirty bars, etc.) Both Jarmusch and Kaurismaki’s characters frequently self-reflects on the ‘grass is greener’ perspective. For example, in Jarmusch’s 1984 film, Stranger than Paradise, a character quips: “You know, it's funny... you come to someplace new an'... and everything looks just the same.” In Shadows in Paradise, Ilona speaks of her aunt in America who has seen only other Finns and Donald Ducks (moreover, Ilona doesn’t feel great when she gets into that posh restaurant with another man). Such stale, misaligned conventions of utopian paradise aren’t for these no-nonsense people. 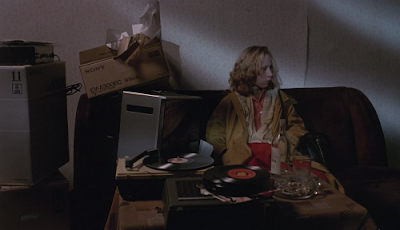 Aki Kaurismaki, unlike his kindred spirit Jim Jarmusch or the film-makers whom he revere -Ozu & Bresson - enhances his work by persistently tackling serious sociopolitical themes. He opens Shadows in Paradise by showcasing the dynamic action of two garbage men throughout the day, which he later contrasts with the stasis in their normal life outside the work place; a sequence which he later perfected in the stylistically superior opening scene of The Match Factory Girl. It also adds to the deeper sense of irony that these working-class people find meaning in labor, whereas the life outside disorients them as the etiquette to survive modern life keeps baffling them. What’s intriguing is the overbearing banality Kaurismaki displays both inside and outside the work space. Dance halls multiply anxieties and humiliation, while materialistic consumption only deepens the emptiness.

The ‘shadow’ in the title might refer to the oppressive social stratification in capitalist societies ruining the eccentric individuals’ idea of paradise. Or maybe Kaurismaki, as usual, ironically observes how his protagonists are perceived as the ‘shadows’ haunting the fairy-tale version of the capitalist paradise.