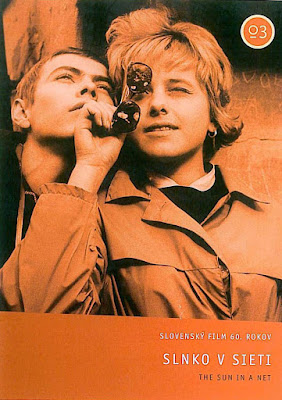 The 1960s was truly the golden era of Czechoslovakian cinema. Slovak film-makers and their counterparts from Czech worked in tandem to create a unique, artistically evolved aesthetics that well rivaled the novelty of French New Wave cinema.  Stirred by the then Czechoslovak communist government’s mild relaxation on the mandated censorship rules, the film-makers produced unflinchingly honest and stylistically radical works that meticulously captured the country’s social and political turmoil. While the Czechoslovak New Wave (although most often ‘Slovak’ is truncated while mentioning this cinematic movement, making it ‘Czech New Wave’) was officially dated from the feature-film debuts of Vera Chytilova, Milos Forman, Jaromil Jires, and Jan Nemec, it should be acknowledged that a pivotal Slovak film have served at the vanguard of Czechoslovak cinematic maturation. The film is Stefan Uher’s The Sun in a Net aka Sunshine Caught in a Net (Slnko v sieti, 1962), which is considered as one of the ten best films made in former Czechoslovakia. Stefan Uher’s formal innovations and themes scrutinizing conformity and liberation were reflected in many of the later well-known works of the Czechoslovak New Wave (all the Czech and Slovak directors of the era were united by their strong emphasis on inventive visuals).

Based on Slovak author/screenwriter Alfonz Bednar’s short stories (which he himself adapted), The Sun in a Net unfurls over one long hot summer, and follows the troubled lives of two Bratislavian teenagers. Although the plot-line may sound like a typical coming-of-age story, its visual poetry repleted with dazzling camera angles makes it a deep and universally apprehensible contemplation of memory, entrapment, freedom, and identity. Of course, like many of the Czechoslovak movies of the 60s, there are layers of social edginess in the narrative which could be better interpreted by discerning the repressive nature of the Czechoslovak state. Nevertheless, the narrative’s inherent truthfulness in observing the teenagers’ emotions and its existential chatter provides a pleasurable movie experience even for those uninitiated with this particular film movement. 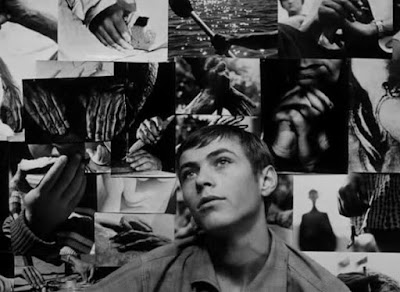 Up until the DVD release in 2013, The Sun in a Net was long ignored in the aftermath of the snuffed-out Prague Spring of 1968. Now its social realist themes attract comparisons with Neorealist movement (for employing on-location shooting and non-actors). The subtle emotional layers plus the gorgeous monochrome cinematography (by Stanislav Szomolanyi) are associated with Truffaut’s masterpiece ‘400 Blows’ (1959). Furthermore, Stefan Uher’s treatment of the landscape, layered sound design, and accumulation of the metaphors are frequently compared with Michelangelo Antonoini’s earlier works (particularly ‘L’Avventura’).  The narrative centers on the 15 year old teenager Oldrich Fajtak, nicknamed Fajolo (Marian Bielik), and his relationship with blonde-haired girlfriend Bela (Jana Belakova). Listening to the transistor radio hanging by one of the densely situated TV aerials, the couple meets on the rooftop of their drab apartment block in Bratislava. When their relationship is stymied by a mild crisis, Fajolo enrolls in a work brigade (on his father’s insistence) on a rural collective farm. During this separation, both Fajolo and Bela find new partners. 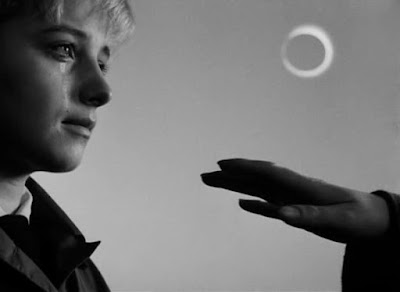 Bela connects with pesky womanizer Peto (Lubon Roman), to whom she reads Fajolo’s lyrical letters. Fajolo undergoes sexual initiation at the badly run collectivized farm after meeting promiscuous fellow worker Jana (Olga Salagova). Besides this story of teenage love, Bednar and Uher also examine their parents’ world.  Fajolo’s mother and father are largely unseen. His mother is always at work, often providing (off-screen) instructions about the meals she leaves in the fridge. Fajolo’s father talks (off-screen) about securing ‘reputation’ through the enrollment in summer farm camp. Bela’s visually-challenged mother (Eliska Nosalova) however features a pivotal role, who is seen as a burden on her family. The mother, who is said to be blinded by food poisoning, solely depends on her children (Bela has a younger brother) to construct her new world view. But they deliberately mislead her, out of frustration and love. Bela’s father is a philanderer, who like Fajolo’s parents is never seen interacting with the younger generation.

The film’s foremost strength lies in its singular poetic approach. Stefan Uher opens the narrative with characters anticipating a rare solar eclipse. The sun and the eclipse easily signals the narrative’s range of polarizing themes: sight (light) and blindness (dark); life and death; serene rural atmospherics and dismal urban streets; love and feelings of entrapment. Throughout the story, Stefan Uher offers rich, complex layers of symbols and metaphors, which naturally couldn’t be fully interpreted in single viewing. Fajolo is characterized as a talented amateur photographer, who is obsessively interested in capturing the expressive power of one’s hands. Fajolo’s quest to photograph the hands mirrors the director’s own investment to meditate upon the truth of his world through the lens of a camera. The most alluring characterization aspect is that of Bela’s mother, whose blindness offers complex interpretative symbols for the viewers to contemplate (she is often framed within mirror reflections, showcasing her entrapped self). The mother marked by her solitude, helplessness, depression, and living in a world she can no more understand stands as the movie’s most tragic figure. 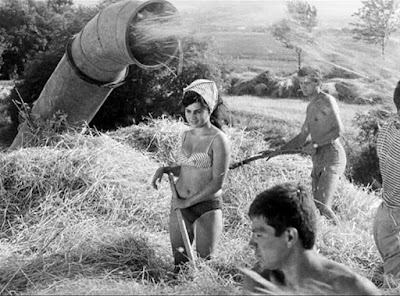 While Bela’s blind mother forms a wrong picture of the world by seeing it through others’ false vision, the whole narrative suggests the myriad of ways each character sees the world. The panes of smoked glass used to view the solar eclipse, the camera Fajolo uses to gratify his artistic pursuit, and even the glimpse of white sun caught in a fisherman’s wide net fascinatingly riffs on the means that obstructs and enlightens our view of the world. Alfonz Bednar’s script is an amalgamation of his three short stories. Hence the narrative is full of formally splendid vignettes that cross-cuts parallel themes through ambiguous use of symbolism. However, the movie never feels disjointed due to director Uher’s use of impressionistic effects and also because of the firmly established sense of time and place. The deft geometrical compositions of post-war Bratislava, the poetic imagery of fisherman’s pontoon at the Danube River, and the free-flowing shots of rural Melanany serve as key location in this land of contrasts, which over the narrative length remains as fascinating as the human characters. 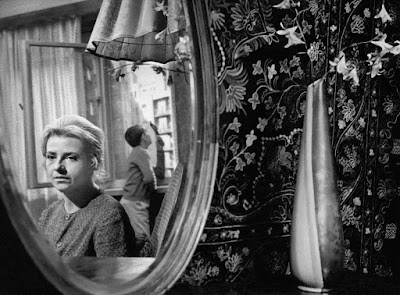 Uher exhibits a keen eye in exploring the joys & sorrows of coming-of-age as well as in dealing with social problems sans old-fashioned didacticism. The film embraces the troubles and complaints of teenagers in 60s Bratislava that’s still universally relevant. When it comes to observing the problems of collective farm and constructive aspect of the ‘voluntary’ work camp, Uher does it in a very objective and mature manner. The tension between elderly peasants and disdained work brigades is treated in a nuanced fashion. Altogether, The Sun in a Net (90 minutes) was unique for its time (and still feels surprisingly fresh) which undoubtedly set the standard for the extraordinary Czech and Slovak films of the 1960s. Like the subsequent classics of Czechoslovak New Wave, it works on multiple levels: spiritual, physical, ideological, and moral.

The Sun in a Net aka Slnko v sieti -- IMDb

The Sun in a Net -- Antti Alanen

The Sun in a Net -- Senses of Cinema

at May 09, 2018
Email ThisBlogThis!Share to TwitterShare to FacebookShare to Pinterest
Labels: Coming of Age Movies, Czechoslovak New Wave, Social Drama