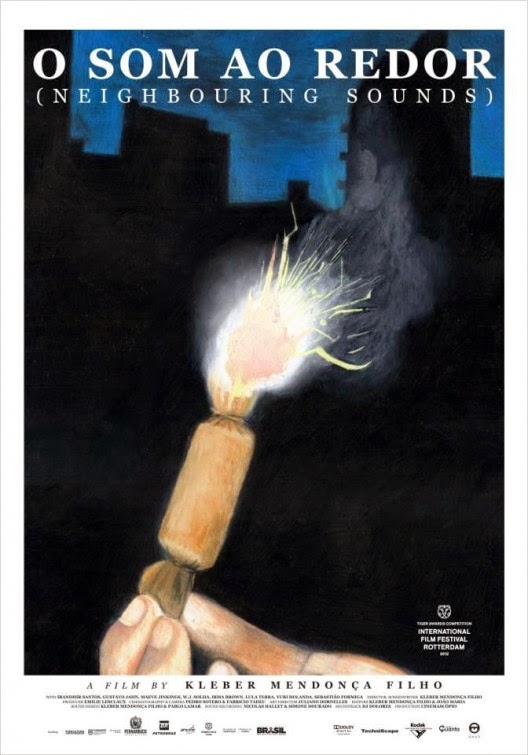 Brazil is one of world’s largest nation (fifth), both in terms of population and geographical area. And, like every other nation, our perception of Brazil is dualistic: Its untouched wilderness, rich football tradition and rhythmic annual carnival represent the happier side, while its trash heaps, favelas, rampant corruption, and drug wars showcases the irrefutable bleaker side (as seen in films like “Pixote”, “City of God” etc). But, Brazil isn’t comprised of these black & white visions. It is a country like China or India, enjoying an economic boom from the early 90’s, and this modernization has brought up an increasingly prosperous middle & upper-middle class populations. Movies (of all the countries) often fail to observe these people, mostly because their uneventful life doesn’t afford much for a dramatic narrative.

The so-called economic boom has bestowed us with tower blocks, LED TV’s, smartphone, & other every state-of-the-art gadgets we yearn to possess.  But, what has remained in these places of high-rise residential buildings? Did those places have a haunting past? What do we (middle-class people) feel about this moderately wealthy mundane existence? Does this comfortable, compound-like urban environment enrich our spirit, like our social status? Brazilian film-maker Kleber Mendenco Filho’s debut feature-film “Neighboring Sounds” (aka “O Som ao Redor”, 2012) is based upon these questions (& many other ponderous ones), which could be termed as a ‘blistering social study’ on the class of people living in high-rise concrete buildings. Set in the Brazil’s rapidly developing coastal city, Recife (director’s home town) the film offers a realistic slice-of-life and almost avoids all the trappings of a dramatic narrative.

In “Neighboring Sounds”, we audience assume the position of James Stewart in “Rear Window”, although there isn’t a thrilling mystery to unearth. Yeah, it is all about intimately observing different kinds of people, but it is more in the Michael Haneke territory rather than Alfred Hitchcock’s. Filho’s slyly funny introduction of characters evokes American master Robert Altman, while the jaundiced bourgeois’ viewpoint of the characters makes us think of the old surrealist master Luis Bunuel. It tells something unique about the haunting past behind Brazil’s contemporary, ever-renovating culture, and also imparts a universal truth about the human condition in an industrialized world. The movie opens with photo archives of Brazil’s oppressive sugar plantation days, and cuts to a tracking shot of a skating girl, who waltzes her way through parking lot to a little playground, which sort of resembles the prison yard.  Eerie background music, a constant rattle of construction work, and chatting maids drowns the elated voice of the playing children.

White-bearded Senhor Francisco (W.J. Solha) with the looks of a genial pastor is the man who owns most of the neighborhood land on which these modern tower blocks are raised. His family has bought all this land with the money from sugar plantation, which has a violent and oppressive past. Francisco has become a millionaire by selling his single-block houses for building these compact condos. Most of his descendants live in the neighborhood. One of his grandsons, Joao (Gustav Jahn) has recently returned from Germany and now works as a property agent for his grandfather. When we first see him, he jubilantly wakes up in his own plush condo with a girl he hooked up with in a friend’s party. The girl, Sofia (Irma Brown) grew up in the neighborhood before the houses went vertical. Francisco’s other grandson, Dinho (Yuri Holanda) is a spoiled rich kid (Joao’s cousin), who likes to steal CD players from car, just for kicks. The neighborhood being a wealthy enclave heavily emphasize on security from impoverished invaders. 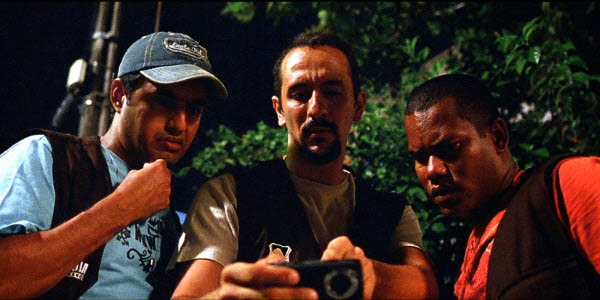 A small band of black-vested, private professional guards arrive to apartment blocks selling patrol services to the crime-conscious people. The security group is lead by a fawning, self-styled man, Clodoaldo (Irandhir Santos), who seems to have a sinister agenda. There’s also assemblage of dark-skinned men & women, who serve their well-off masters, but the relationship between them is mostly familial or collegial. These characters vary from the maternal long-time family maid Maria to a water deliveryman, who is also the neighborhood’s dope dealer. He often sells drugs to a bored housewife Bia (Maeve Jinkings) with two very observant children. She uses vacuum cleaner to conceal her pot habit and finds sexual gratification through the vibration washing machine. Bia also resorts to various methods to silence the consantly barking dog in an adjacent courtyard. We aren’t given any back-story for these narratively unrelated characters because the main agenda here is to make us experience this suffocating, noisy environment packed with little urban tensions. 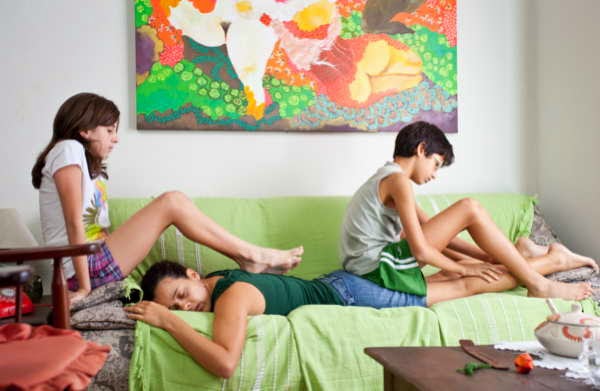 It would have been easy to turn the premise of “Neighboring Sounds” into a heavy-handed social diatribe, but charged with an atmosphere of impending danger the movie & its characters keep on building, eventually leaving it to us to extract a pattern of meaning from this privileged enclave. And, for a thoughtful viewer, there really are a lot of subtle ideas & symbols waiting to be derived. In one scene, Joao shows an apartment to a women and her daughter. She comments that the place ‘looks like a factory’ and later bargains on hearing how its previous owner committed suicide by throwing herself from the balcony. Joao firmly replies, “The place isn’t haunted”. But, director/writer Filho constructs each scene to prove how their privileged world is haunted. The scene where Joao goes to his family’s old house near the sugar plantation with Sofia and Grandfather Francisco moves eerily as if some vengeful ghost of the past is lurking around the corner. The sequence even ends with a vignette that belongs to a ghost flick. We never exactly know what devastating event happened in those places, but we are hinted that the alienation of the present has its roots in the sinful past.

Filho’s shots often view the marginal people from a moderate distance (the viewpoint of well-off apartment dwellers) as if they themselves are ghost of their oppressed ancestors. The privileged class although remain more dependent on these impoverished people they still see their class of people as a security. In a surrealistic scene, Bia’s observant little girl has a nightmare about onslaught of poor invaders, jumping inside the gates of their enclosed neighborhood. This haunting dream that comes out of nowhere, shows us how this child who learns Mandarin and English to seek a bright future, is taught to fear her own fellow, less-privileged countrymen, living in the crowded favela. 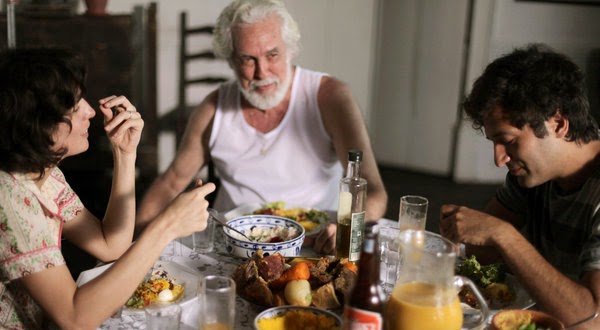 Filho, through the relationship between Sofia and Joao, tries to show how the relationships are seen in the globalized society. They both see it as a transient way of getting pleasure, and so when Francisco, in his farm, keeps on asking about questions of marriage to the couple, they try to avoid it. Even the sex between them hangs like a memory of the past rather than a real thing. However, the reason for them breaking up seems to have a deeper meaning, which might be related to Sofia’s visit to the farm and her old house. Sophia visits her old house, which is about to be demolished. In her old room, she sees the stars in the ceiling. She might have felt a rush of nostalgia, but the alienated past also parts way to look at her own rootlessness and obsolescence. The stars in ceiling are shown to have remained all these years, despite being whitewashed. This image once again confirms to the movie’s central theme of how the tragic past hangs in the air despite being covered up.

Filho’s uses masterful and insinuating sound design at times to convey the characters’ point of view. The great instances for such perfect use of sound could be found in the opening sequence; or when Bia stands closely to her shaking dryer; or when a trio of characters stand beneath a raging waterfall. A projection of unease is constantly created through the sound of grinding machinery, even though the neighborhood looks like a sunny paradise. Although there isn’t a heavy, violent pay-off on-screen, Filho keeps on ratcheting tension through little suggestive details.

Director Filho’s acute observations and metaphorical depictions often reminisce of Haneke’s “Cache”, but the ending shows that the films are a bit opposite. “Cache” starts off like a conventional thriller and ends up as a political allegory and a treatise on urban dread, but “Neighboring Sounds” doesn’t boast semblance of a narrative right from the start, but comes up with a strange twist in the end, rounding up certain elements of the plot. Still, “Neighboring Sounds” remains grippingly open-ended and leaves a lot of disquieting questions on its wake.

The revelatory portrait of this Brazilian neighborhood could also be transported to the rich suburbs of Mumbai, Singapore, Beijing, or Tokyo, but Filho does add little flavors to relate the story to the history of Recife city. This Brazilian city is said to have higher homicidal killings than any other Latin American city. The city is known for its secret group of off-duty and former police officers who are dedicated to executing undesirable elements – street kids & other petty criminals. In this context, the film’s recurring insistence on security has a vital relevance. In a scene, old Francisco goes for the beach to swim, which has boards warning about ‘shark attacks’ (Francisco comes out unscathed). As per the official stats, 18 people’s lives were lost in the last two decades to shark attacks in Recife, but at least 3,000 people are being killed each year in various murders. Filho might be poking fun at his home city, which perceives shark as a threat than the violence perpetrated by humans.

The elegantly crafted “Neighboring Sounds” (130 minutes) explores the quotidian life of people in a privileged neighborhood, without trying to hammer in an elaborate message. The film may not offer solace to those who expect narrative or tidy resolution in movies, but there is abundance of metaphors, symbols & impeccable framing to make a movie-lover happy.