Bronson – A Vicious and Stylistic Wonder 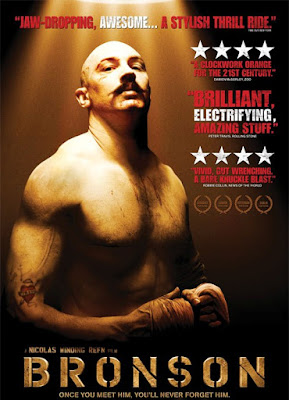 Nicolas Winding Refn is one of the divisive and maverick contemporary film-maker. You will either hate or love his work (there is no middle ground). At the age of 26, Refn was accepted into the prestigious National Film School in Denmark. But, he opted to “Pusher” (1996), a de-glamorized portrayal of a small-time Copenhagen gangster. The movie was huge hit in Denmark, but in 2003 his career almost came to an end because of the utter failure of “Fear X” (2003), a psychological thriller. He then came back strongly with extremely violent sequels to “Pusher” (the human carcass disposal scene is engraved in my mind). However, these films didn’t possess the stylistic wonder, which now defines Refn’s works. With “Bronson” (2008) portrayed the heightened kind of violence by taking a heavily stylized approach. The violence and destruction in Refn’s films, from then on, could be best described with words like ‘weirdly beautiful’ or ‘whimsical’. Refn with “Bronson” carved out a fresh cinematic ground, where energizing visuals and jaw-dropping central performance took precedence over the traditional story-telling devices.

“Bronson” is a visionary biopic of Micheal Gordon Peterson aka Charles Bronson, who is known as ‘the most violent prisoner in Britain’. However, Refn defies every convention and jumps every pitfall, into which a film-maker might fall under in order to make a prison drama. Michael Peterson, born on 1952, has always liked a bit of ultraviolence. He enjoyed fighting as a teenager and got involved in various petty crimes. He moved through several numbers of jobs and at the age of 22 (1974), he took his sawed-off shot gun to steal 26.18 euro from a local post-office. He was caught and sentenced for seven years. Inside the prison, Bronson loved to brawl against prison officers and fellow convicts. He was transferred through 120 prisons and spent most of that time in solitary confinement. Upon his release in 1988, Peterson pursued a career in bare knuckle boxing, where his promoter dubbed him ‘Charles Bronson’, after the macho American star. But, he spent only 69 days outside as a robbery once again landed him back inside. His constant hostage-taking incidents and belligerent behavior, inside the prison has confined him to a solitary cell (for four decades; in 2014 he has changed his name to Charles Salvador and wishes to distance himself from his past reputation). 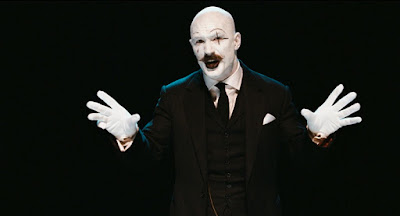 Refn’s crimson-red opening sequence establishes what an unbridled beast Bronson (played by Tom Hardy) is as he is pacing side to side inside his cage, charging up for the upcoming onslaught with the prison officers. Refn isn’t looking to take an empathetic approach, by depicting his childhood and the causes for his violent behavior. He just abruptly immerses his viewers into the manic rage of his central character. The brutal set-pieces are inter-cut with to-the-camera narration, in which against a black backdrop, Bronson is on a stage explaining his ego-maniacal worldview to an audience. These slipping-through-the-mind sequences come between each spurts of Bronson’s mad acts, showcasing how Bronson orchestrated his own destructive behavior.  In these sequences, Bronson fancies himself as a vaudevillian, which works very well since his erratic conduct itself is born from a desire to be famous (to occupy the center position of a stage). 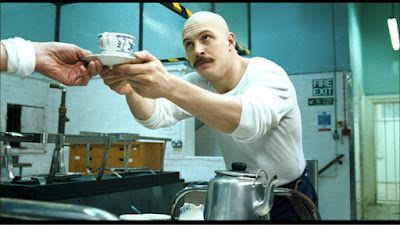 Director Refn on a public discussion forum stated how he and Tom Hardy despised each other during their first meeting to talk about ‘Bronson’. Refn even considered Guy Pearce and Jason Statham for the role, but then Hardy bulked up, obviously not wanting to leave this prize role. “Bronson” wouldn’t have been the same feral, powerhouse feature, if not for Hardy’s performance. Although he ‘bares all’ in front of camera in various sequences, he has worn the suit of wrath & rage throughout the film. The way Hardy explains his exploits & philosophies deviates from the general idea of Peterson being a dumb, insane animal. Although Hardy never goes for empathy or tries to hide the malevolence, he perfectly exhibits how Bronson is totally powerless to his violent impulses. 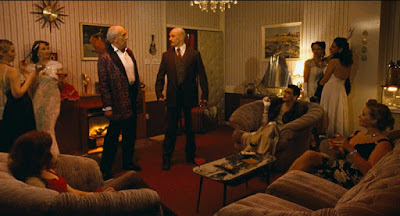 Nicolas Refn, although lionizes Bronson’s exploits, never feature him as a martry or isn’t trying to make a treatise on British Penal Code. It definitely isn’t a contemplation on cause & effects of punishment. As critic Roger Ebert rightly declares: “It is 92 minutes of rage, acted by Tom Hardy”. Refn just lets Hardy go to showcase his genius acting, while at the same conjures up some brilliant imagery to lend wild charisma to the proceedings. The splendid symmetrical camerawork (by cinematographer Larry Smith), low-level compositions, and tantalizing tracking shots immediately make us to recite ‘Kubrickian’. The blending of classical music during the brutal beat-downs also reminds of us the influential auteur. The protagonist’s black humor, anti-social rants, and the prison imagery likens to Kubrick’s “A Clockwork Orange”, although in ‘Bronson’ there is no rehabilitating techniques. 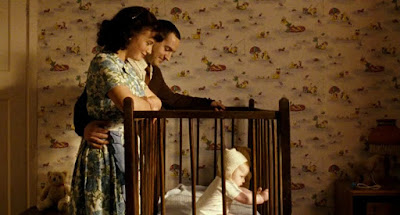 The use of color palettes (muted ones to show the decaying prison and the crimson red during the clashes) in the film definitely needs a detailed studying and could be comprehended with repeated viewings. But, what enamored me is the way director Refn, through brief moments, demonstrates how psychologically Peterson aka Bronson will forever remain in captivity. After getting released in 1988, Bronson is picked up by his parents in a car, and after reaching home, he struggles to open the locked door of the car; in other sequence he couldn’t open a closed gate, and furthermore Bronson comes across many closed doors even on the outside. A video essay I came across in Vimeo (titled ‘Bronson: Psychology and Symbolism’) pin-points, how Refn subtly fills his frames, throughout the film, with horizontal and vertical lines to convey the feeling that Bronson always remains in a cage (literally & figuratively). 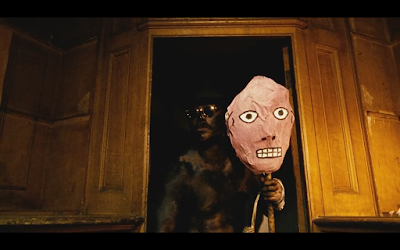 My favorite part in the film is the final stretch when Bronson during a phase of passivity discovers art (painting) and displays great progress. He maintains a good relationship with the instructor and enjoys his time in the prison art room. However, when the prison warden itself acknowledges this slight rehabilitation, Bronson is bedazzed. He is a man whose actions from adulthood have brought him the much-desired tangible results. But, the reaction of everyone to his art remains impalpable to him and so he lapses back to his old-self, taking the instructor as a hostage and eventually is beaten senseless by the guards. It once again highlights or confirms Bronson’s distorted idea of being a hero.


“Bronson” (92 minutes) is a surrealistic and stylized theatrical treatment on the life of an imprisoned backslider. Like all of Nicolas Winding Refn’s work, this film too would bring out balanced reactions of repugnance and enchantment.

Bronson: A Subversion of the Conventions of the Prison Film

Sounds interesting... and Tom Hardy is a great actor, so I'm curious to see.