Inside Out – Yet another Profound Pixar Masterpiece 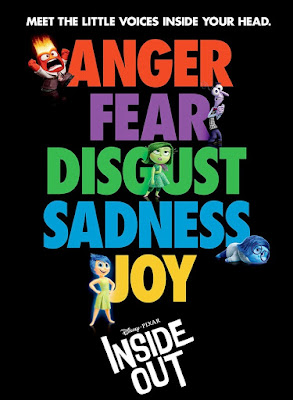 For the past two decades, Pixar Animation studios (starting from “Toy Story” (1995)) have put together astounding visual feats with strong narratives that were funny, soul-stirring & profoundly beautiful. In their works, the core film-making members of the studio – John Lasseter, Andrew Stanton, and Brad Bird – paid fitting tributes to every cinematic achievement, from the lovely little silent movies to the deeply artistic works of Anime master Hayao Miyazaki. However, the studio’s course of sustained excellence nearly came to a halt as it imparted us with average flicks with little originality. Pixar had gone into a slumber, after that genuine tear-jerker -- “Toy Story 3”. “Cars 2”, “Brave”, and “Monsters University” were all entertaining, but it certainly weren’t emotionally involving experience. And, after the announcement of sequels to “Finding Nemo”, “The Incredibles” & “Toy Story”, it felt that Pixar was also infected by the famous ‘franchise’ virus of Hollywood.

Later, when I saw the 1st trailer of “Inside Out”, which was touted to be directed by the maker of “Monsters Inc.” & Up”, it didn’t seem that much impressive. It appeared that “Inside Out” will turn a unique concept to include the beaten-down, conventional ideas of animated flicks. But, director Pete Docter has absolutely uprooted all our per-ordained thoughts by giving us a madly-inventive film that turns a ‘hard-to-grasp’ abstract concept into a grandly entertaining movie. “Inside Out” (2015) is not just the best of Pixar or of animated films; it’s an astonishingly great psychological thriller that puts a smile on all our faces. We have seen actors conveying their characters’ emotions through body language and voices, but here the emotions themselves are the central characters. 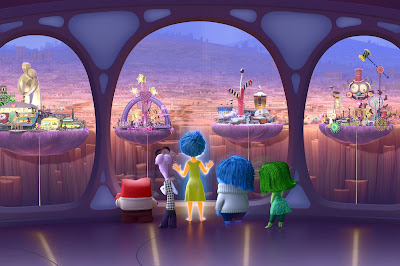 Fear, Disgust, Joy, Sadness, and Anger – the five basic emotions that drive our behavior are the stars of the film and they are residing in control headquarters (brain) of a pre-teen girl named Riley. Joy is characterized as illuminating pixie of exuberance. She solely fights against other headquarter colleagues, to keep things up-beat for Riley. Sadness is a plump, blue-colored girl, who is unsure of her role in HQ and ruins every memory she touches. Fear is a purple, slender figure with nervous ticks. The green-colored Disgust forces Riley to be sarcastic & judgmental. And, the block-shaped, red-colored Anger is always on the lookout to charge up its fire. Outside the Central HQ is the vast mind-scape, which is sparsely populated with ‘personality islands’. 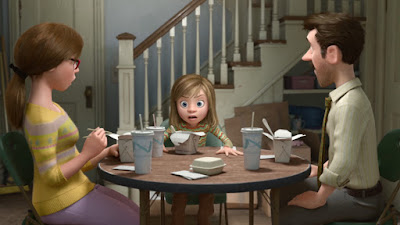 The 11 year old Riley has had a joyful life with her two loving parents. Her childhood in Minnesota is occupied with best friends and ice hockey. So far, Riley has developed five personality islands: Hockey Island, Friendship Island, Family Island, Honesty Island, and Goofball Island (indicating her playfulness and sense of humor). These five islands are those that provide her emotional-stability. But, calamity strikes soon as Riley’s parents decide to move to San Francisco. Joy does her best to keep Riley engaged, but when every time Sadness touch Riley’s vital memory – depicted as a crystal marble – it becomes an unhappy one. Later, an accident plunges down Joy and Sadness (along with Riley’s core memories) into the furthest dark corners of the brain, leaving Fear, Disgust, and Anger to take control of HQ. Now, Joy & Sadness must find their way to HQ before Riley make mistakes that can’t be fixed. 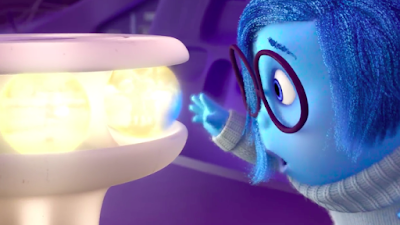 Like the montage sequence in “Up”, director Pete Docter fills “Inside Out” with delicate moments that makes grown men & women weep. On the outset, it is a very simple tale about a girl dealing with family relocation and losing her childhood friends. But, the director turns such a run-down premise into an epic fantasy that is full of inventive, high-concept thoughts. Only talented Pixar film-makers could create such a complex world and explain it with some brief & dazzling expositions. The level of inventiveness here is so high and the density of details is so dense that it is hard to marvel at every visual within a single viewing. Pete Docter takes us through abstarct psychological concepts of Sigmund Freud and into the surrealist interior mind-scapes of Dali, without ever losing the vision on dramatic clarity. 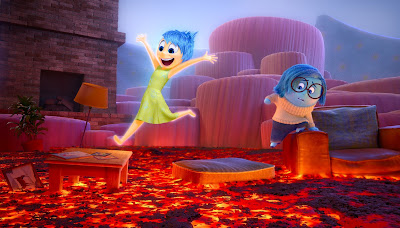 If a genius creator has pitched the idea of “Inside Out” to some Hollywood Studio executive before the mid 90’s, he/she would be deemed insane. They might have asked ‘are you stupid to make a film solely based on a kid’s emotions?’ But, now the existence of “Inside Out” proves that there is still abundant hope & energy within the franchise-frenzy Hollywood. The stylized and innocent inner world of this animated feature has few parallels with toy world of Lasseter’s animation flick. Both films were about the creatures of micro-worlds trying to solve a bigger emotional crisis, by making an odd, epic journey.

On paper, all of Pixar’s plot structures look cloying and pretentious (you could say that ‘Up’ is just about an old widower making an unbelievable trip to a South American Island). But, onscreen the studio’s film-makers imbue enough magic to bring out a huge emotional impact. The vivid, state-of-art images, Docter cooks up are remarkably poignant because every one of us knows what growing up means. We know why our childhood images are the best and purest and Riley’s age is the perfect & first time, when we humans experience the thing called ‘bittersweet’. 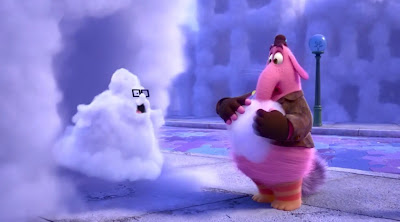 The subtle facial expressions we witness in Riley’s face are some of the best in computer-generated imagery. The bright primary colors imbue an astonishing look to the film. The terrains such as Imagination Land, Abstract Thought, Subconscious (“trouble-makers”), and Dream Productions (the setting reminds us of Docter’s “Monsters Inc.”) were all ingeniously designed. These settings itself holds some clever visual gags (like the sequence that explains how TV advertisements get stuck in our heads).  Apart from the pivotal characters, the most interesting one was ‘Bing Bong’ – Riley’s imaginary friend, who seems to be wandering around the recesses of memories. It is a character cloaked in ludicrous outfit but exerts enough emotional pull within its short space.

“Inside Out” (94 minutes) is a witty film, filled with bedazzling images, that showcases how nostalgia and sense of loss is as much important as exuberance. With this soul-stirring meta-story, Pixar once again proves that it is at the top of its game.

Watch Inside Out Movie Online Free