In the Bedroom – An Excruciating Emotional Journey 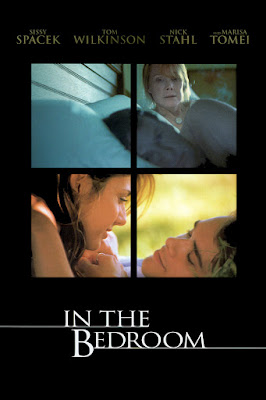 ‘A middle-class or a suburban family facing an unbearable tragic event’ is an often repeated story line in movies. Such modern tragic films try to latch onto the characters, bringing out their raw emotions. However, more often such works turn into melodramatic showpieces, where the film-maker and the actors work in tandem to manipulate the viewers’ emotions. Themes like grief and death would only get a skin-deep exploration as the script works its way to put our favorite actor in a most tear-jerking moment. Todd Field’s intimate and elegiac family drama “In the Bedroom” (2001) stands apart from such aforementioned works. The tragedy in the film was approached with psychological nuances and the powerfully understated performance (without any over-wrought close-ups) makes us genuinely feel the characters’ emotional trauma.

Of course, the film’s title seems a bit dubious. It might make some viewers to expect a film on the adulterous affair of an estranged couple. Although the movie itself subtly hints at the meaning behind the title, revered movie critic Roger Ebert sums it up best in his review: “the title (In the Bedroom) refers not to sex but to the secrets, spoken, unspoken, and dreamed, that are shared at night when two people close the door after themselves”. Based on the short story (“Killings”) by Andre Dubus, “In the Bedroom” starts off like a feel-good romantic story, where a beautiful girl and boy run through tall grass & warm breeze, and passionately kiss on the ground.  But the girl, Natalie (Marisa Tomei) is at least a decade older than the boy, Frank (Nick Stahl), who has just finished his high school and spending his summertime as a part-time lobster-man. 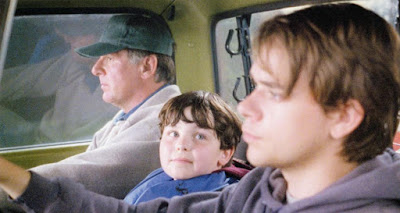 Natalie has two young sons and a not-yet-divorced, unstable husband, Richard (William Mapother). Frank lives with his doctor dad, Matt Fowler (Tom Wilkinson) and mom Ruth (Sissy Spacek), a high school music teacher. They all live in an idyllic & quiet Maine fishing town. Matt, in one of his fishing trips with Frank and Natalie’s son, Jason, states what happens when two male lobsters are caught in a trap with a female. However, Matt doesn’t inquire on Natalie’s husband lurking behind the lovers’ vicinity. Matt, the overly loving & lenient father doesn’t judge his son’s affair, even when he comes home with a bruise (after a fight with Richard). Ruth, however, disapproves the affair totally, and repeatedly doubts Frank’s answer that it is only a summertime fling. Frank truly loves Natalie and her sons, and secretly thinks about not going to college. Nevertheless, a tragedy suddenly strikes and leaves the characters to walk in daze with pent-up, incendiary emotions.

Todd Field, who has played small roles in movies like “Twister”, “Eyes Wide Shut”, makes an outstanding directorial debut with “In the Bedroom”. Careful spectators couldn’t mask their surprise on how Field’s first attempt on direction remains subtle as well as intense. Field has co-written the script with Robert Festinger (he also makes his debut). The duo gradually constructs a revenge scenario, but never provides the viewers the much-expected emotional catharsis. It is unbelievable that such a confident film-maker and meditative script-writer had only worked in one film after this 2001 film (Field made “Little Children” in 2006; and Festinger wrote the script for “Trust”).

Frank’s character is written as a budding & talented architect. In one earlier scene, he explains to Natalie about a architectural design that has intrigued him: a home design where a common room is constructed between adult and child bedrooms. Frank believes that with such a design, families would spill into the center (and forced to communicate). We don’t the reason behind Frank’s fascination with this type of architecture, but as we gradually grasp the design of Fowler’s house in the later part, we could understand Frank. After the tragic death of Frank, the awkwardly designed Fowler’s home helps in an indirect way to keep Matt and Ruth at a distance. Director Field silently and separately observes the estranged couple as they are trapped behind the house’ windows & doors. Matt and Ruth run around the house rarely exchanging words and glances, fearing that it would only lead to a fiery battle of emotions.

At one point, the pent-up emotions bursts out, making the couples to lash out on each other. But Field & Festinger confines the verbal warfare more in the territory of Bergman (deep & contemplative) rather than use it to give the viewers an emotional comfort. The conflict and the distance between Matt & Ruth haven’t entirely vanished, but somehow they have learned to empathize with one another. Many viewers might be irked at the middle-section of the film, where no meaningful conversation happens. But, that is exactly Field’s point: words could never easily relieve our loss. The director repeatedly showcases the futile atmosphere surrounding the character (like buying groceries, watching non-stop chatter in TV) to make us feel the characters’ emotional emptiness. Apart from being subdued study of grief & loss, the film is also a fine examination of vengeance. 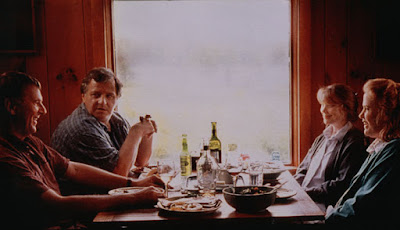 Revenge scenario usually makes us to demand for the perpetrator’s blood. And, as Matt Fowler travels down that path (following Richard’s activities); we are with him (we want him to succeed). But, Field has perfectly devised these sequences in order to make us feel the ultimate hollowness behind vengeance. The director’s decision to keep Frank’s death off-screen helps to lend a layer to Richard’s generally smarmy & egotistical character, especially in those final scenes. The happy portrait of Richard & Natalie plus the children’s drawing pasted on the wall of Richard’s house adds some subjectivity to Richard’s character. So, in the end when Richard is shot in cold blood, we only feel that nothing is resolved or accomplished.

Despite the visually brilliant direction and subtle writing, the film could have easily ended up being dull, if not for the potently effective performances from Sissy Spacek and Tom Wilkinson. Spacek embodies all of Ruth’s imperfections and anguish. She perfectly displays the emotions of a women, who has lost control over her life and in turn holds on to rage. Wilkinson taps onto the tortured-self of Matt, who thinks that committing murder is the only way to stifle his grief. He is particularly great in those little moments, when Matt constantly comes across things that either reminds him of Frank or Richard.

“In the Bedroom” (131 minutes) is an emotionally complex and troubling study of human grief, without a hint of weepy melodrama. Its lack of closure would definitely make you brood on it for days.

In the Bedroom -- IMDb
at June 17, 2015
Email ThisBlogThis!Share to TwitterShare to FacebookShare to Pinterest
Labels: Family Drama, Hard-Hitting Movies