It Follows – A Spooky Thriller on Teen Sexuality and Paranoia 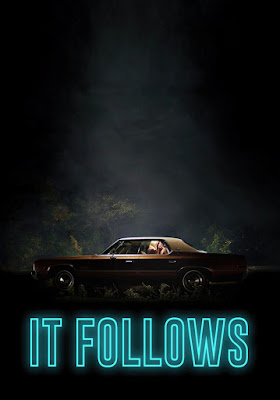 We always fear what we don’t know or understand. Horror thrillers catch up on that basic strand and build up a monstrous creature or an apparition, which taunts the protagonists and obliterates ignorant by-standers. But, at some point in the story, the film-maker chooses to provide weird mythologies or back-stories for the creature or ghost to reassure the audience that everything will be resolved in the end. Nevertheless, the moment we get to know about something terrifying, its insidious purpose too comes within a perceivable framework. David Robert Mitchell’s “It Allows” (2014) possesses a relentless, malign entity at its center, although the director never explains what it is. The film blends art-house sensibilities into classic horror genre, which may disappoint viewers expecting a disturbing, but a conventional horror flick.

The movie starts off with a great, creepy prologue sequence, where a young girl runs out of her house with a dreadful look and keeps an eye on the center of road. We couldn’t what she is afraid of, but the girl quickly gets into a car and runs off to the beach, where she meets grisly fate. Then we see our main protagonist Jay (Maika Monroe), a 19 year old blonde college coed, who lives in her suburban home with a younger teenage sister Kelly (Lili Seppe) and a widowed mother. We rarely see the mother, who seems to have no real engagement with her daughters’ lives. Jay’s two friends Yara (Olivia Lucardi) and lovelorn Paul (Keir Gilchrist) always spend time at her house. Jay is dating an attractive & mysterious guy Hugh (Jake Weary), who points to a girl in a yellow dress, whom Jay couldn’t see. Later, Jay’s first sexual experience with Hugh ends up in the worst way possible as he chloroforms her and ties her to a wheelchair in an abandoned building. But, Hugh intention isn’t to hurt Jay, but to explain & warn about what’s waiting her. 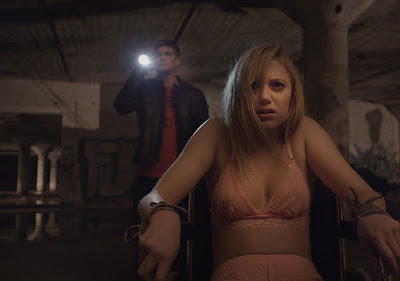 He says that he had sex with Jay to pass onto her a supernatural spirit – simply called as ‘IT’ – which has been haunting him. Hugh explains that from now on, Jay would see strange people walking towards her at a slow pace, with an intention to kill her. The ‘IT’ can appear at anytime, at any form (sometimes it could even take the form of someone she know). Hugh’s advises her to pass it along (by having sex with someone else); to never enter into a place that has one exit; and to never let ‘it’ touch you. If Jay doesn’t pass the curse, then it would kill her and return to haunt Hugh. Jay is dropped in front of her house in underwear and her friends think that she has been raped. She tells the police that sex was consensual, but for some reasons Hugh have skipped town, and Hugh is not even the guy’s name. From then on, only Jay sees the ‘IT’ in terrifying forms, although can outrun it as long as she’s outdoors or in a room with more than two doors. However, she is traumatized by IT’s shapes and thinks about passing it on to a friend. Jay’s sister and friends stand by her, although they don’t fully believe in her visions. 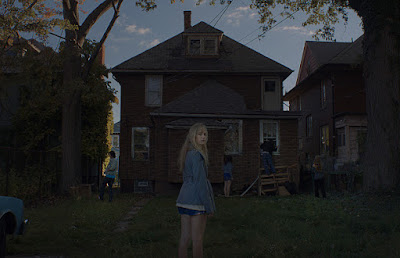 Director David Robert Mitchell debut film “The Myth of American Sleepover” (2010), a realistic & sensitive coming-of-age tale, which managed to be screened under ‘Cannes Critics Week’. “It Follows” also played over in Critics Week Committee and some critics even called it a find of the festival. The movie has to be hailed for providing a visceral ride that scores full marks on atmosphere. The constant fear of IT is explored psychologically and so for the most part jump scares are avoided. Instead, what we have are suspenseful long shots & slow tracking shots (by cinematographer Mike Gioulakis), where we closely look at every human walking towards the camera. Take the scene, where Jay and her male neighbor Greg enter the school to collect information on ‘Hugh’. From the hallway, the camera circles the premise (with an unnerving music on the background) and from a distance observes all those present. The shot is set in such a manner where we are on look out for strange characters that are traveling towards the building. Although, nothing terrifying happens in that scene, Mitchell keeps us on the edge in some mundane information-gathering sequence. 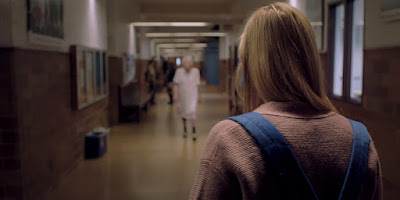 My favorite one was when Jay wakes up in a hospital after having an accident. She looks at her mother and friends (all of them sleeping) and sees the open door of the room. Since the room has only one door, she dreadfully looks at the hallway. With tears rolling from the eyes, Jay heaves a sigh, when some person passes across the room. This constant sense of paranoia and dread felt by the primary character is what makes the film stand out from the usual uncanny horror premise. Unlike a studio horror film, Mitchell opts for grotesqueness as a scare tactic rather than gore or blood. It Follows’ atmosphere could be compared to Micheal Haneke’s works (especially “Cache”), although it isn’t as emotionally deep as the auteur’s works. But, if Mitchell keeps his uncanny style, he could very well turn attain a revered auteur status one day.


The scenes also some times blacks out, leaving it to us to guess what happened. The boat guys sequence is one such example. We see jay getting into the water and later she her driving the car, crying with a wet hair. But, we are forced to make our own decision on what happened.  Mitchell takes the simple plot element in most of 70’s slasher thrillers from Wes Craven or John Carpenter, where teens (especially the girl) are punished for their promiscuous behavior (they easily become the first victims of the killer). He adds layers to the plot element, allowing us to make different metaphorical readings. It’s hard to pin-point on what ‘IT’ is. Is the film a metaphorical treatment of STD or teenage sex? (Mitchell, however, remains non-judgmental about teenage sex) Or is it about a congealed force of evil in an isolated urban society (parents who are responsible for these teenagers are kept away). Repeated viewings may offer some answers, especially on the constantly repeated water symbolism.

The other big question on viewers’ mind would be ‘on what period is the movie is set?’ The TV’s, the electrical appliances and the characters reminds us of the era when John Carpenter made his best horror films, but that clam-shell e-book reader (Yara’s), the dilapidated urban districts and the dresses the teens wear looks contemporary (Mitchell intentionally messes up the time period just like he keeps us in the dark about the monster).  Despite all the fascinating visual approaches, “It Follows” didn’t satisfy me because of its over-the-top literal-minded setting and those sequences totally lacked a truly frightening moment.


“It Follows” (100 minutes) is a spooky, atmospheric horror thriller with a purposeful subtext. The film-maker’s choice to keep the horror element inexplicable and ambiguous may definitely irk the fans of conventional horror films.