Devils on the Doorstep – Commoners Entangled by the Forces of History 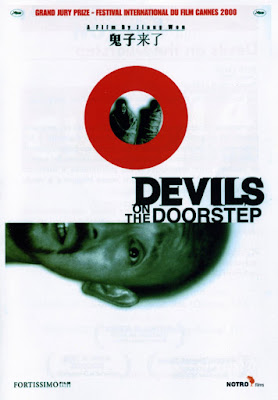 Chinese films depicting Sino-Japanese war often tend to be melodramatic, imbued party ideologists’ version of Japanese occupation in China. Movies portraying the bloodcurdling massacres perpetrated by Japanese army take a docudrama approach and admits in  lot of gore that are associated with the horror movie format. “City of Life and Death”, “Black Sun” and “Don’t Cry Nanking” are some of the Chinese films that portray the brutalities endured by Chinese masses during the WWII occupation, but these films only serve to educate Chinese audiences about the devils & enemies of past (Communist party’s account of the past) and often fails to generate a impact on global audiences. Jiang Wen’s “Devils on the Doorstep” (2000) is one of the rare Chinese films that replace the propagandized view for a humanistic view. It is a film which is not made for nationalist or educational purposes, but makes every viewer around the world to show immense respect for the innocent individuals (and mourn for their loss), who lost their lives during that deplorable period in Chinese history.

And, of course “Devils on the Doorstep” was immediately banned (after winning Grand Jury Prize in 2000 Cannes Festival) in China and actor/film-maker Jiang Wen was shunned from directing films for seven years. Since the victims and perpetrators of that period are showcased as humans caught in the absurdity of war, it might not have appeased the Chinese censors. On the outset, the ‘devils’ in the film’s title might seem to indicate the ‘Japanese invaders’, but as the narrative progress, the meaning of ‘devils’ elusively changes. The tone (especially in the second-half) and the depiction of top military brass characters reminded me of Kubrick’s anti-war masterpiece “Paths of Glory” (1957). The foremost shot of “Devils in the Doorstep” establishes how it differs from the typical ‘Japan Occupation’ flicks. The narrative is set in a remote village on the Chinese coast, known as ‘Rack-Armor Terrace’, and the year is 1945, few months before the end of WWII. The children of the village are waiting for the Japanese naval band that marches through (playing the famous warship march), whose captain liked to bestow candies on the hands of gleeful Chinese children. 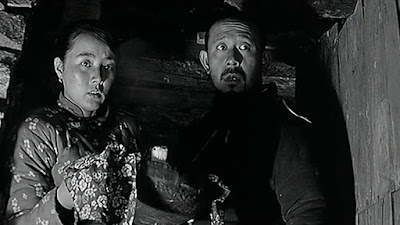 The Japanese soldiers, waiting for their turn to show bravery & heroism, don’t have much to do in this coastal village, except to March and demand chickens from the villagers. The average peasants aren’t plotting with Chinese republicans or communists to kill the Japanese ‘devils’. The innocent people are just content with their life and kow-tows, whenever the Japanese threaten them with a gun. Ma Dasan (Wen Jiang), the story’s protagonist, is one day interrupted during his surreptitious lovemaking session with Yu’er (Yihong Jiang), a widow with a 10 year old son. A stranger, whose face is masked by the darkness of the night, threatens Dasan at a gunpoint and drops two human-filled sacks at his doorstep. The stranger instructs to keep them healthy till he comes to collect them on the eve of Chinese New Year and also asks him to interrogate them. 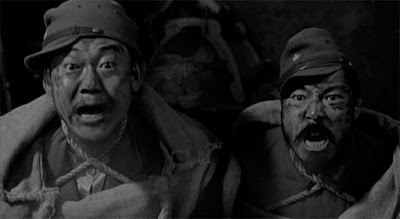 The two men in the sacks are: Hanaya Kosabaru (Teruyuki Kagawa), a Japanese sergeant captured from a nearby outpost; and his Chinese translator Hanchen Dong (Yuan Ding). The village men gather under old patriarch (Zhijun Cong) decides that it is best to follow the stranger’s orders rather than turning them over to Japanese blockhouse in the village. The Japanese sergeant spews words with animalistic intensity and dares the villagers to kill him, while his Chinese counterpart translates incorrectly to imbue a genial feeling with the villagers. As winter is approaching, Ma Dasan and Yu’er, tie their prisoners with blankets, and keep them in the barn. The couple tends to their wounds and even smuggles in white flour (a rare thing to be found in the village) to make delicious dumplings. New Year’s Eve comes and goes, but the stranger who dropped these men doesn’t arrive. 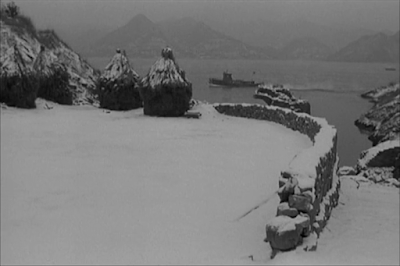 The Japanese soldier tries different tactics to announce his presence in the village to his fellow countrymen, who marches through routinely. Although these efforts fail, the villagers grow more anxious about the dangers of keeping these prisoners. Once again, under the decision of old patriarch, the men decide to kill the two, but it is easily said than done. The job falls in the hands of unlucky Dasan as the other village men volunteer to dig the pits. Dasan panics and hides the prisoners in the Great Wall. When the villagers discover what Dasan has done, they turn against him (except for Yu’er, who thinks that if Dasan kills them, it would curse the child on her belly). The men conjure up other plans to cast aside this prisoners’ problem (some of these plans veers into slapstick territory), but when Japanese Captain Inokichi Sakatsuka (Kenya Sawada) enters into the narrative, we witness a most disturbing & darkly comic final act. 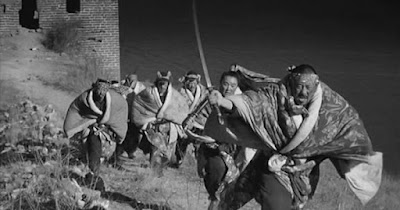 Wen Jiang’s protagonist differs immensely from the typical heroic figure we often see in these kinds of crisis films. Ma Dasan is a slightly irresponsible man with no family. He panics and runs away from problems, but these characteristics don’t make him an anti-hero. We could empathize with Ma Dasan and identify with his dilemmas. The villagers aren’t portrayed by adhering to the rules of ‘simple-minded stereotype’. They can be hypocrites too (look at their reactions when they learn that Dasan has botched the killing plan). Despite that nightmarish massacre scene towards the end, the Japanese aren’t shown as devils; they are just depicted as commoners who are ready to commit gruesome acts, in the name of loyalty and obedience.  There are times when we could empathize with Hanaya, especially when his false bravado drops in front of the villagers. Such subtle characterizations of the Chinese and Japanese tend to be humanistic rather than the usual good vs bad conflict.

Although the events in the film unfold in simple monochrome, this vital & grim historical chapter is seen in a more rational & complex manner. Wen Jiang’s movie doesn’t try to reconstruct its judgement on the Japanese occupation of China. In fact, Jiang uses subtle ways to depict the brutality and bloodshed endured by the Chinese. The villagers are always remain alert towards the Japanese threat, but the director’s choice to imbue little perspective of Japanese side is what made his film to be banned in China. Jiang was accused of reviling Chinese and beautifying their old enemies, while few on Japanese side condemned the way Jiang presented the Japanese military. It is an irony that “Devils on the Doorstep” is misinterpreted for what it’s not, since one of the main themes of the film itself is ‘misinterpretation’. 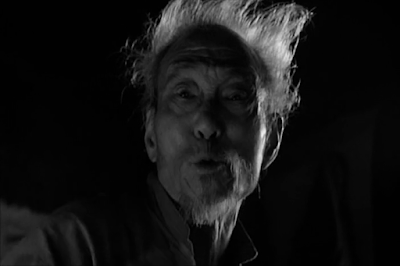 ‘Devils’ is associated with the ‘comedy’ genre and at times Jiang was condemned for diffusing humorous incidents within this grim historical chapter. This film was Jiang’s second directorial effort and so he couldn’t elegantly handle some of the wild tonal fluctuations (especially the assassin hiring sequences, which looked like boisterous comedy). However, we could note the fact that all the comic elements rise from a form of ‘misinterpretation’. Initially, the language barrier creates the humorous situations. Hanaya aks the Chinese translator to teach him some Chinese curse words. When the Japanese soldiers says those taught words with a fiery passion, Ma Dasan and Yu’er are stunned in an amusing manner, since the translator has only taught the Japanese sergeant to say: “Happy New Year Brother and Sister-in Law! You are my Grandfather and I’m you son!” In another scene, the captives teaches a child to say the Japanese words, which means “Japanese in the Great Wall”, when the child is about to go to receive his routine candy.  There is also a senile old man (Yu’er’s father-in-law) who fervently articulates: “Leave those turtle-fuckers to me! I’ll throttle them”. 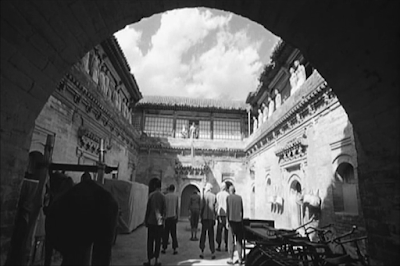 All these aforementioned lines evoke laughter, when used under particular circumstances. But, these same lines are said during that distressing finale, and now we are allowed to interpret the same words from the brutal viewpoint of Captain Sakatsuka. The captain views these words plus the laid-back attitude of the villagers as a blot on his military honor, and so incites his loyal compatriots to wield the sword on the common folks (including children & old people). The villagers throughout the film are afraid that their acts would be misinterpreted as ‘collaboration’ (either by Chinese fighters or Japanese invaders). The narrative brilliantly showcases how misunderstanding or misjudging takes countless forms and differs from each individual. Hanchang Dong’s role (the Chinese translator) during the Japanese occupation is misinterpreted and so is Dasan Ma’s final act. Director Wen Jiang during the final 10 minutes depicts the muddled and gleeful political nature of the misinterpretations. It shows how we humans are taught to misinterpret and how brutalities are justified through these misconceived ideals. 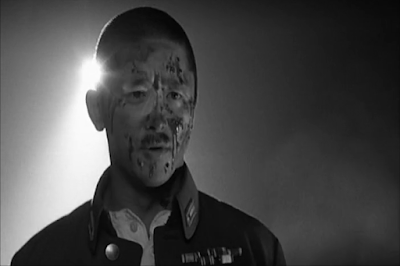 The complicated questions Wen Jiang rises in the end is pretty evident. He isn’t content to finish the film with the brutal massacre of the village. The Chinese in the end take a cruel stand, while Japanese are in the sidelines as surrendered puppets, who has retained their so-called bravery and heroism.  Director Jiang explores how even when the roles have changed after the end of WWII, the brutalities and carnage flourished, only now with a different set of ideals. Eventually, both Ma Dasan (Chinese) and Hanaya (Japanese), who hail from the ranks of commoners & peasants, seems to have been caught in what’s known as ‘absurdity of war’ that are conceived by those with a warped sense of national identity. Wen Jiang’s visual styles behind the camera aren’t as adorable as his complex themes. He often thrusts with a close-up and follows every dialogues pronounced. But this little exhausting visceral mode doesn’t affect or distract our attention towards the characters and themes. The other minor flaw in the movie is that Jiang hasn’t penned well developed female characters (even Yu’er seems to be an under-written character). 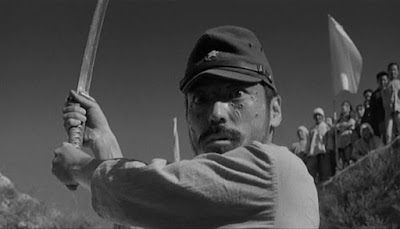 “Devils on the Doorstep” (139 minutes) is one of the rare, humanistic treatment of the war trauma endured by Chinese during the Japanese occupation. The ironic and indignant portrayal about the madness & fatuity of warfare also makes it as one of the best anti-war films.