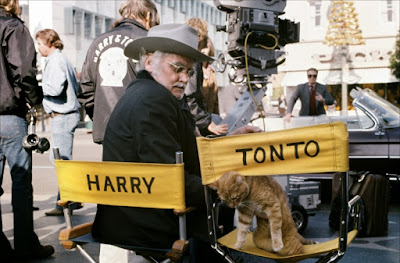 Old men hitting the roads for a farewell or a rejuvenating journey are one thing Hollywood loves to do and most of the time gets it right. “Straight Story” (1999), “About Schmidt” (2003) and “Nebraska” (2013) are some of the road movies involving elderly people that made an everlasting impression on me. These kinds of road movies genuinely portray the inner turmoil faced by people of that age and at the same time avoid the chances of providing morbid diatribes. Also, the easygoing look at America in these films provides a valid counterpoint to anti-establishment road movies like “Easy Rider” (1969). Paul Mazursky’s “Harry and Tonto” (1974) charts a kind of farewell, cross-country journey made by 72 year old guy to meet his children. Harry’s celluloid journey seems to be the inspiration for those aforementioned road trips of Mr. Straight, Warren Schmidt and Woody Grant.

What makes Mazursky’s film more superior to other road movies is that this isn’t a contrived trip of self-discovery or a mission to find life’s pleasures. Harry has no great objective here; he just adapts to the highs and lows of life journey with the same unabashed nature. There is no heightened sense of melodrama or social protest or rambling on the American counterculture. “Harry and Tonto” opens with a montage of old people, sitting on the roadside benches or walking through the dirty streets of New York City. The story’s protagonist Harry (Art Carney) emerges as one among the crowd with his beloved companion, a cat named ‘Tonto’.  Harry, a widower and retired teacher is seeing the transformation of his Manhattan neighborhood for the worst. He has been mugged four times within a short span, and almost run over by a ‘big gray job’, which his good Polish friend Jacob Rivetowski (Herbert Berghof) calls as the vehicle of a ‘capitalist bastard’. 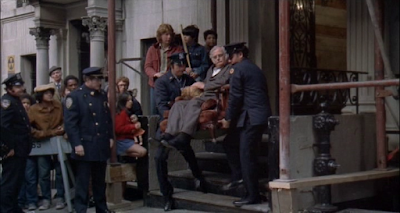 He is nostalgic about the life he had or the moments he missed, like all of us. Harry is particularly irked about the eviction notice on his apartment (a parking lot is going to be raised there). Soon, Harry is forcibly evicted (carried to ground floor from his favorite chair) and he goes to live with his elder son Burt (Phil Burns) in a suburban neighborhood. His presence there obviously puts some kind of emotional strain on Burt’s wife Elaine. Also Burt has enough problems with his two young sons – Norman (Josh Mostel) and Burt Jr. Norman has taken a vow of silence and chosen macrobiotics, while Burt Jr. plainly hates Norman for that. The dinner conversation even digresses to the various types of drugs Burt Jr. has stuffed up his nose. Harry knows that he can’t forever share a room with his silent grandson on this calm neighborhood. He opts to make a cross-country journey to Chicago to meet his estranged daughter, Shirley (Ellen Burstyn). The resulting bittersweet journey is made of small wonderful moments, without ever getting mawkish. 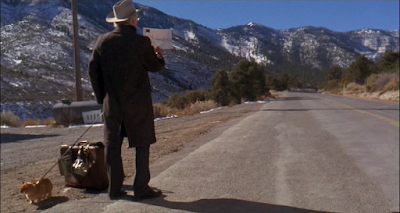 “Harry and Tonto” made a great impression on me mainly because of the way Art Carney subtly portrays his character, with some excellent, observant dialogues written by Mazursky and Josh Greenfeld. Mazursky is said to have offered the role of Harry to iconic actors like James Cagney and Laurence Olivier, but Carney’s voice and those little inflections shuns us from thinking any other actor on this role. While director Mazursky has done his best to avoid a lot of pitfalls that might plague this kind of road movie, there are still few melodramatic moments, which were transformed absolutely my Carney’s low-key performance. Apart from the soulful monologues (“You never feel somebody’s suffering; you only feel their death”), three sequences I thought Carney played the characters’ emotion to perfection: when Harry arrives to say a final goodbye to his friend Rivetowski; the poignant dance sequence with Jessie Stone, a sweet-heart from the past; and when Harry says goodbye to his 10 year-old companion Tonto in a reduced emotional state. 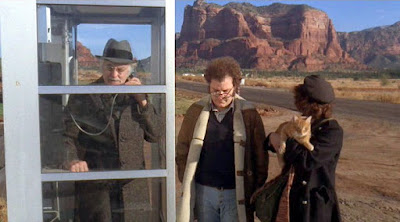 Harry is characterized with the ideology that life is worth living or worth the experience, despite the mistakes we made or tragic events we went through. This naturalistic attitude of Harry is well realized throughout the film. Harry tries to understand the transformation that is going around him with a freshly acquired wisdom or perspective. He is obviously shocked or irked by certain behaviors of the youngsters (“Oh! This must be the Pepsi generation”). At one point, he even utters “Guess I am little too old to readjust my thinking”, but Harry isn’t too old-fashioned (despite being a teacher) to bring down lectures. He understands the absurdity of Norman’s stand, but he treats him with respect (“Is there any literature specifically relating to what you are doing?”). Harry knows that he is a lonely man and his soliloquies with Tonto convey that feeling, but at the same time, he also embraces the independence the life has given him. The self-respect this old man has for himself is the greatest life lesson we could adopt. 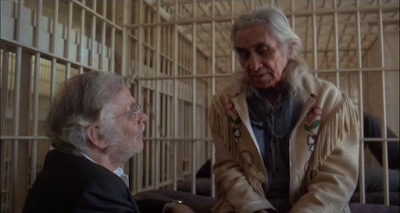 Director Paul Mazursky makes naturalistic hero figure to come across a variety of elderly people, who are all beset by their own financial & health problems or kicking against the tides of life, like Harry. All these multifaceted characters (who occupy the screen space for a very brief time) convey the different kind of feelings when people reach a ripe age. Mazursky has also made Harry, staying true to his teacher or the early singing roots, to often eloquently relates his present circumstance with a song or literary verse. Mazursky marvelously uses his understated dialogues to create the right mood (solemn or humorous). The sequence between Harry and an Indian medicine man (Chief Dan George) in the holding cell is the perfect example for the writer & director’s restrained nature. Dan George’s solemn commentary on the television shows, baffling expression at the mention of Tonto (legendary fictional Native American character) and the yearning for an electric bender generates few chuckles. The comic parts in the film don’t rise from making fun of the characters, but rather through exhibiting the attitude of a character on a particular aspect of American society. The other little, wondrous vignettes I liked were Harry taking in the hitchhiking 16 year old, Ginger (Melanie Mayron); the episode with a elderly cat salesman driving around in a weird van; and Harry’s conversation with his bedraggled younger son in California.


“Harry and Tonto” (115 minutes) is a bittersweet journey of a tender & mirthful old man, who is always on the lookout for life’s magical moments. It must be watched for the nuanced & elegant performance of Art Carney.

Thank you for recommending I will remember the feeling of the movie as tender and casual.