Zero Motivation – A Dramedy on the Inanities of Army Bureaucracy 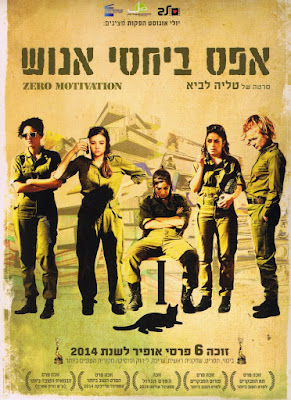 Israel is a country with conscription: mandatory military service. All Israeli citizens over 18 must serve in Israel Defense Forces (IDF) – two years for women & three years for men. A lot of Israeli films have emerged in the past decade or so that showcases slice of life within an army base. It has tackled the drudgery, disheartening battles and incredible sacrifices. But, rarely a film comes to terms with the boredom that’s experienced by people working on administrative lines of an army. Robert Alrman’s “M*A*S*H” (1970) portrayed a remote military unit that’s trying to eradicate their tedious existence by inventing abusrdist internal rules and sharply funny pranks. Joseph Heller’s satirical novel “Catch 22” (and the move adaptation) was also about group of men trying to survive through the madness & boredom of warfare.

Tayla Lavie’s “Zero Motivation” (2014) is constructed with the similar kind of nonsensical vignettes, but the twist here is that it focuses on a group of paper-pushing female sergeants in an Israeli army base, situated amidst a desert. The film juxtaposes breezy comedy with unsettling themes, which at times doesn’t perfectly undergo the tonal shifts, but the deadpan drollery and largely unpredictable narrative bestows an engaging movie experience. Set in 2004, “Zero Motivation” opens with a chapter named “The Replacement”, which introduces us two best friends Zohar (Dana Ivgy) and Daffi (Nelly Tagar) waiting for the bus to get to the isolated military post. Both the girls hate to work inside the human resource offices of the army base. Daffi, whose designation called as paper-shredding sergeant, is very desperate to get out of the desert post. She has written a series of letters to even the 'Chief of General Staff' for a transfer order to the metropolitan city, Tel Aviv. 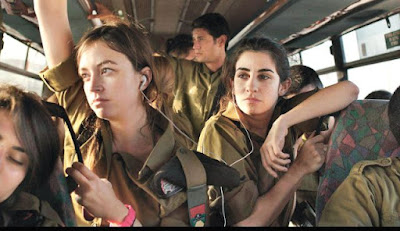 On the way to base, after the weekend leave, Zohar and Daffi find a new girl in the military outfit. Daffi takes the girl named Tehila (Yonit Tobi) with her and jumps to a conclusion that Tehila is the replacement. Daffi introduces the girl to the frustrated superior Rama (Shani Klein) and gives a tour through the clogged up office and its cabinets. She shows how to perfectly shred a paper and describes staple gun as ‘the most precious thing in the office’. Zohar is busy clearing the virtual landmines in the computer game ‘Minesweeper’. Other members of the office include an easily-annoyed Russian expat Irena (Tamara Klingon) and a couple of cool, personality-less girls: Livnat and Liat. The girls’ primary jobs are to serve coffee at meetings and write boring reports. The girls may not have engaged in bloodcurdling battles, but blood does find its way to the foot of their bunk beds. The later two chapters “Virgin” and “The Commander” tracks the increasingly dysfunctional lives of Zohar and Nelly as friendships fall out and loneliness creeps in. 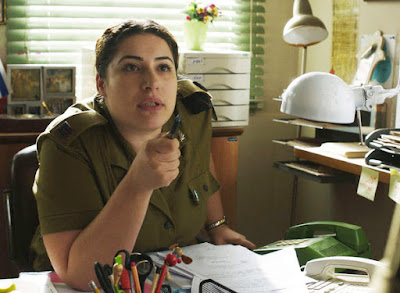 “Zero Motivation” does explore grim themes, but director Lavie imbues enough deadpan humor that perfectly underlines helplessness of the characters’ situation. Zohar (who grew up on a kibbutz) is characterized very well. Her awkward flirtation with a soldier during her mission to lose virginity, her obsession with minesweeper records and increasing morose behavior are etched out in an engaging manner. The friendship between Zohar and Daffi reminisces of Terry Zwigoff’s “Ghost World” (2001).  Lavie starts each chapter with an optimistic note and gradually descends with a dark twists. The dark comedy gets darker at times, especially with an attempted rape scene, followed with trashcan-humping and a bloody staple gun fight in the end. These distinct dark twists along with the casual depiction of female-centric environment are the best of Lavie’s directorial impulses. 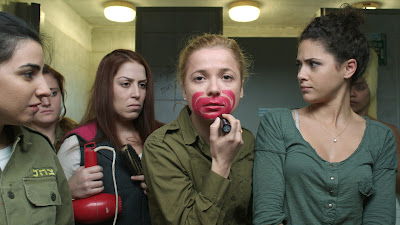 The movie’s flaw, however, lies with a script that isn’t thematically coherent and its comedic bite fizzles out as the narrative progresses. Director Tayla Lavie, in an interview, states how she was inspired by movies like “Pulp Fiction”. But, “Zero Motivation” doesn’t firmly forge a connection between vignettes as Tarantino and Altman did in their superior darkly humorous tales. At times, the film gives a feeling as if we are watching an anthology. Of course there are some wonderful moments in the narrative: like top army men telling gay jokes in a meeting as the lone female colleague working on how to react; an illogical but a great act of revenge by Zohar against bureaucratic nonsense; Irena’s encounter with the ghost etc. But, the triptych never possesses that casual or logical connection. 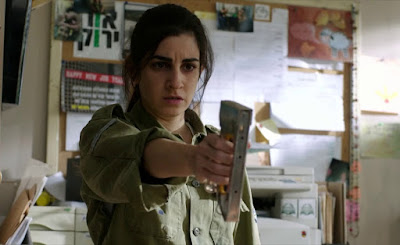 At one scene, we see Daffi in the city military base, day-dreaming her romanticized view of Tel Aviv. We understand that Daffi isn’t doing well despite getting transferred to the city (for officer training). But few minutes later, we see her with superiors, who are congratulating Daffi for passing the tests to become an officer. The time-jump doesn’t show what caused this transformation, but it is just used as a plot point to fuel the upcoming events. When Daffi is given an envelope that shows her posting place, we know where she is going to go. Although Lavie misses out on a nuanced script, she had done well in extracting great performances from her female cast and never gives into the urge of making political statements. The apolitical nature of “Zero Motivation” works better for the film, since it isn’t a work commenting on the triviality of war. Lavie’s intention solely rests on showing how female soldiers are only treated as secretaries and how their under-represented dis-satisfactions are brushed off by didactic speeches on patriotism.


“Zero Motivation” (97 minutes) takes a darkly humorous glimpse at the tedious lives of female pencil-pushing soldiers. It is hampered by few easy resolutions, but the distinctive style of absurdism keeps us engrossed.

I've never watched an Israeli movie yet. But after reading your post, I think I will catch this movie.
As always, this is a good review. I've one suggestion though. Could you add a rating section? That would help your readers make up their minds.

@Navin, many of the modern Israeli are gaining prominence among global cinephiles. "Footnote", "Gett" and "Late Marriage" are few of my favorite Israel films. I mostly try to review movies that engrossed me. Anyhow, I will surely add a rating section.