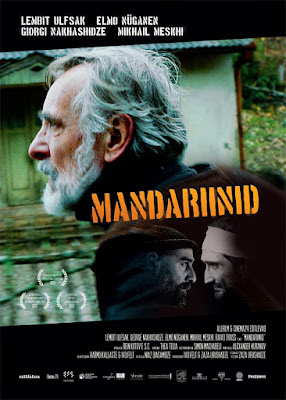 Zaza Urushadze’s Estonian film (Georgian co-production) “Tangerines” (2013) doesn’t add anything new or imbue a fresh perspective amongst the myriad of anti-war films. Prior to watching the movie and based on reading the plot, some might judge this film to be an ‘award-bait’ work (“Tangerines” earned an Oscar nomination in the ‘Best Foreign Film’ category – first nomination for an Estonian film). But, this retelling of an often-tackled subject in cinema is laconic, powerful and heartfelt. Yeah, the ultimatum “Tangerines” provides is the same old-school message of ‘trust & love your fellow human beings and lay down the arms’, but how it expresses this message is what makes the film an essential one.

The opening title of “Tangerines” renders the background on Abkhazian-Georgian conflict of 1992 after the collapse of Soviet Union. The Eastern European countries, situated in a corner of Caucasus (vast region between the Black and Caspian seas that contains the Caucasus Mountains), were wracked with escalating civil wars. Russian-backed Abkhazians (also with Chechen mercenaries) fought against Georgians, in the early 90’s, for a parcel of land. The Georgians were accused of conducting ethnic cleansing among the different groups of Abkhazia. Estonians, who lived alongside the Abkhazians and Georgians for more than hundred years (they settled in the area by 1880’s), were caught in the middle of this civil war. By 1992, when the events portrayed in the film are set, many Estonians fled to their homeland. 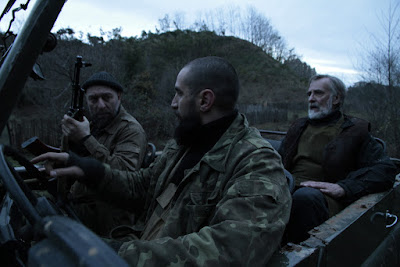 The idyllic Estonian settlements are almost empty except for a couple of elderly men. Elderly Ivo (Lembit Ulfsak), a carpenter, is making wooden crates in his workshop for his neighbor & friend Margus (Elmo Nuganen), who don’t want to leave his tangerines until it is harvested. A local army commander has promised to Magus to send few men to help with the pickings, but they have to wait for now as war broods over their abandoned town. At one, war literally comes to these elderly men’s doorstep as two bands of rival group kill each other in the streets. Ivo nurses the wounded Chechen mercenary Ahmed (Giorgi Nakashidze) and while digging graves for the dead men notices one Georgian soldier, Niko (Misha Meskhi), who is still breathing. Ivo takes both of the badly wounded men in and brings them back to health (with the help of a doctor friend and Margus). As Ahmed and Niko gradually recover, the bitter enemies vow to kill each other, but both of them also promise Ivo that fight won’t ensue as along as they are living under his roof.

The rest of the film observes the two fighters’ senseless belligerence, mistrust and also examines the region’s conflict in microcosm. The plot’s premise may not be original, but “Tangerines” turns out to be an effective anti-war manifesto, thanks to the nifty skills of the actors involved and director Zaza Urushadze. The film’s title doesn’t seem to be just referring to the colorful fruits amidst the greyish war zone. It might refer to the deep-seated compassion of the two old men in the middle of all these insensible antagonisms. We can also draw comparisons between Margus’ obsessions of harvesting the fruits with that of Ivo’s attention to the soldiers, who genuinely tries to harvest the good will out of them. From one perspective, the orange fruits may be a symbol of hope (for a better future), while from other perspective, the fruits appear to be a symbolic representation of neglected populations that are left to rot, in the name of nationalism.

The script without infusing any enhanced dramatic moments gradually disassembles the mental barriers that reside within Ahmed and Niko from understanding each other. The back-stories and dialogues don’t force any manipulative sentiments on the viewers. The chief accomplishment of Urushadze is the way he casts a poetic eye to the surroundings & characters without ever turning both into a mawkish element. Some might view Urushadze’s decision to not delve deep into the region’s history & conflicts as a flaw, but I think by not enclosing a sense of place or specificity, the movie becomes a powerful universal tale on ethnic prejudices and religious differences. Despite certain feel-good factors, the director has displayed the boundaries to this clear-sighted optimism.The film-maker also doesn’t pass away the instances to include unfeigned tragicomic humor. 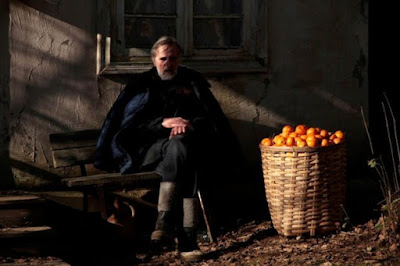 The self-referential scene (‘cinema is a big fraud’) as the three old men push the fighters’ van to the bottom of a ravine plus the absurd verbal spat between Ahmed and Niko provides few chuckles, while the shifting opinions of the individuals imbues a lot of poignant moments. The pensive performances of the all-male cast perfectly deliver the dramatic conflicts and social life of the respective characters (especially Lembit Ulfsak, who conveys the essential world weariness and compassion of Ivo). Director Urushadze demonstrates the battles in an intense and jarring manner, particularly the final shoot-out with the Russian soldiers.

“Tangerines” (87 minutes) conveys the time-worn message about how ‘war is brutal’ and how ‘humans would fare well with compassion and trust’, but the path taken to deliver this message is what makes the film fascinating, poignant and universal.