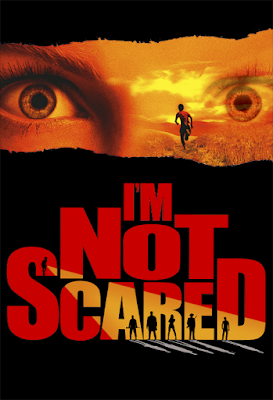 A boy’s penchant for electrifying adventures often gives us a captivating movie experience. Modern film-makers like Steven Spielberg, Guillermo del Toro have weaved nice whimsical tales from the thought-provoking child’s point of view. Gabriele Salvatores’ adventurous and poetic coming-of-age tale “I’m Not Scared” (2003) has the rare finesse in portraying a boy’s world. The film was based on Niccolo Ammaniti sensational Italian novel (Niccolo wrote the script for the movie). Deemed as a suspense story in the vein of Hitchcock classics, “I’m Not Scared” is set in the sun-drenched, idyllic village of Southern Italy – the setting which cinephile would have come across in Italian masterpieces like “Cinema Paradiso” & “Il Postino”.

The film commences in a dark underground place, where water is dripping and the words ‘I’m not scared’ is written with chalk on the rocky wall. The shot dissolves to a bucolic wheat field, where a lone black crow appears as some sort of ominous omen for the events that are to unfold. A group of 10 year old are joyously racing across the wheat field. As the kids reach their final point, a bully of the group humiliates an overweight girl, and our protagonist Michele (Giuseppe Christiano) steps in to take a dangerous dare. They get to an abandoned, dilapidated house and Michele is dared to walk on a beam, dangling high above the ground. This incident pretty much establishes the nature of Michele, who steps up when things go haywire. As the kids head-back to home, Michele’s little sister Maria (Giulia Matturo) says she has lost her glass. Michele asks her to wait near the field and goes to that broken-down house, where the spectacles lie atop a sheet metal. 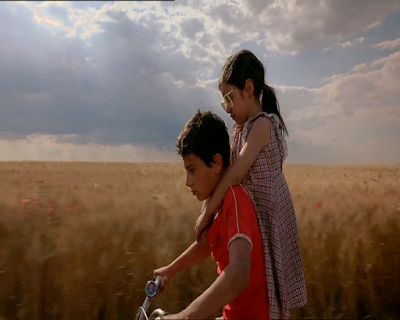 He moves the sheet to find a deep hole and expects to finds, as in adventure stories, a cave full of treasure. But, what he sees shocks him: a small human foot. Michele is baffled by what he saw in the hole and takes his sister on bicycle to home, welcomed by a frustrated mom (Aitana Sanchez-Gijon). However, the kids are elated to see their father Pino’s (Dino Abbrescia) truck. Pino looks like a ideal, loving father: arm-wrestles with Michele and promises to stay with the children for few days. The next day, out of curiosity, Michele goes to that deserted place with deep hole and removes the lid. But, there is no foot, only a sack is lying on the ground. He brings his head a little forward, trying to get a full view of the hole. And, all of a sudden, a little unwashed, chained, blonde boy with eyes closed and hands forward comes to Michele’s view. Startled by what he found, Michele’s immediately closes the lid and runs. We could feel the thudding of his heart as Michele crashes his bicycle on a small rock and goes flying. He lies there unconscious for quite some time. 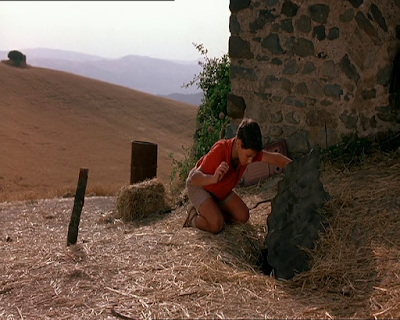 Michele still doesn’t know what to make of this shocking discovery and when he arrives at home, his father gives him an earful for wandering around. At night, under covers, Michele relates the presence of the ‘boy in hole’ to a fantasy tale (about blonde evil twin) he has read. He gradually gathers his courage and goes back to the hole, where the blonde boy, hiding under the sack, asks for water, then for something to eat. Next day, Michele asks the village’s shop-keeper “If someone’s hungry, what can they buy with 500 liras?” A friendship develops between the two ten year old boys and Michele is very careful to avoid the shady young man (his playmate Skull’s elder brother), who now and then, stops by to take a look at the blonde boy. Michele still finds it hard to grasp why someone would put a boy inside a hole. The blonde boy thinks that he is in the hole because he is dead. One evening, Michele finds out who the blonde boy is, when his parents, their neighbors and friends are calmly watching over the news. 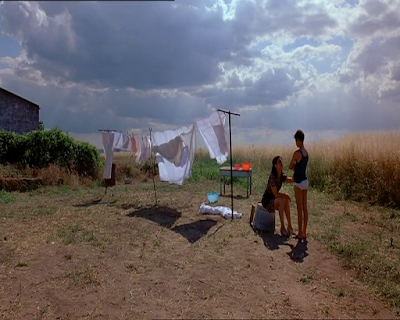 Although “I’m Not Scared” falls under the crime/thriller genre, it neither boasts incredible revelations nor infuses dangerously silly villains to charge up the boys’ adventure. The answer to why the blonde boy is in the hole is revealed very earlier in the movie, as Michele searches for a pot to fill with water in the abandoned house. The clues to, who the blonde boy is, lies around Michele, but he is little too innocent to grasp it. Questions might arise on how a 10 year old could be so innocent, but the rural, ‘cut-off-from-modern-technology’ setting (it is important to note that the movie is set in the late 1970’s) provides some answer to the boys’ behavior.  So, the film would have a great impact on us, if it is seen as a coming-of-age tale with taut thriller elements. 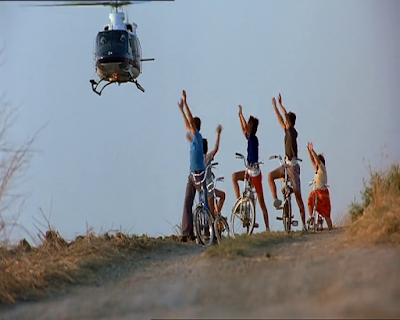 As revealed by few cinephiles in the ‘IMDb discussion boards’, the kidnapping motive of the villagers materialized due to segregation that existed between Northern and Southern Italy in the 70’s.  The southerners is said to have experienced extreme poverty, starting from the end of World War II, and the crisis reached a threshold point by the 1970’s. That’s when few of the southeners devised plans for kidnapping wealthy Northerners with Swiss bank accounts. A series of kidnappings during that period even made the Italian government to pass legislation for preventing rich victims from paying up the ransoms. The justice system imposed heavy punishment on the kidnappers and quick arrests were made (which somehow explains why everything goes bad for the kidnappers). These facts could shed some light on the villagers’ insensitive and ambiguous attitude towards the boy.


The chief elements to admire in the film are the characterizations, the two boys’ performance and the sumptuous mise en scene. The very first scene, when Michele chooses to help his sister, over winning the race and how he saves another girl from humiliation perfectly foreshadows how Michele would act at the time of a crisis. Writer Ammaniti wonderfully mixes the compassionate, self-respectful nature of Michele with that of his innocent childhood beliefs: in ogres or witches. Ammaniti imbues the child’s belief in preternatural things to the perspective of blonde boy, Filippo too, as he asks to Michele “Are you my guardian angel?” The kidnapping event and the resulting discovery just serves as a kind of wrecking ball that derails the boy’s trust on adult world. Ammaniti and director Salvatores also subtly stage the scene, when father Pino brings home the ‘Gondola’ (boat). It is presented as the adults’ yearning for a materialistic life and an escape from the poverty-stricken surroundings. 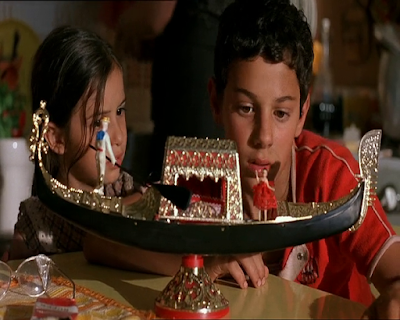 Both Maria and Michele have never seen a gondola and asks what it is, while in a later scene, Filippo talks on general terms about ‘veliero’ (a sail ship -- a portrait of it is seen when Filippo’s mother is appealing to kidnappers on TV). These simple, unnoticeable scenes imply the contrast between the isolated life of Michele and bourgeois upbringing of Filippo. The mother, Anna’s frustrated and world-weary attitude is also borne from this yearning for better life. She talks about going to beach after all this is over and at one point, urges Michele to promise her that ‘he will get out of this town when he grows up’. The other kidnappers are also not vilified in the way Hollywood movies tend to do. Pino’s pompous friend Sergio seems to be a family man, despite choosing to murder the boy. Felice, the bully, just seems to be wearing the roughneck attitude to conceal his inner weakness. 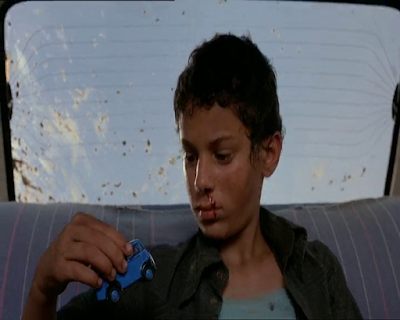 The most intriguing and sublime scene in the movie happens when Michele trades the secret about Filippo to his friend, in exchange for a toy truck. Later, when Michele is in the hole with Filippo, he is caught by Felice, beaten and put into the car. Michele stares into the front of car as his friend sits with head bowed. The betrayal (for a car ride) rankles Michele as he plays with the truck for one last time, and puts it down by also thinking about the way he has betrayed Filippo for a mere toy truck . With only eye contacts and little gestures, director Salvatores have amazingly assembled this sequence. Similar to classic Hollywood films, “To Kill a Mocking Bird” & “The Night of the Hunter”, “Stand by Me”, “I’m Not Scared” too travels through a plot, where innocent children encounter the darker side of humanity. But still, the dazzling camera movements and golden landscape diffuses a unique atmosphere, which grips our attention till the end. 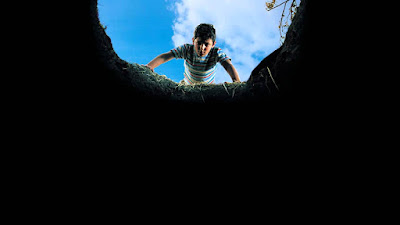 Salvatores and cinematographer Italo Petriccione bathes the breathtaking wheat field in the amber-cyan palette (reminded me of Spanish auteur Victor Erice’ films and Del Toro’s “The Devil’s Backbone"). Michele’s final journey to save Filippo is awesomely visualized as we see various nocturnal animals, coming to the surface, indicating the dangers lying ahead. The ‘hole’ is symbolically represented as something evil. And, every time Michele looks into the hole and learns something about Filippo, he loses his allusions about the outside world. At one point, Michele promises Filippo that he would back next day, before he is betrayed to Felice. Later, he promises his father not to seek Filippo anymore. The next day, he wanders between the fields contemplating and tearing-up inside on the two promises he had made the day before. On the horizon, we gradually see a ‘combine’ harvesting the fields, indicating an end of season as well as the termination of Michele’s childhood.  All the child actors give a spectacular, uninhibited performance. The climax tends to be a bit dramatic and sentimental, but the final image has a great painterly quality to it.

“I’m Not Scared” (105 minutes) is a genuinely thrilling and emotionally satisfying coming-of-age tale with a unique atmosphere and authentic performances.