Best of Enemies [2015] – An Engrossing Study on Intellectual Vanity 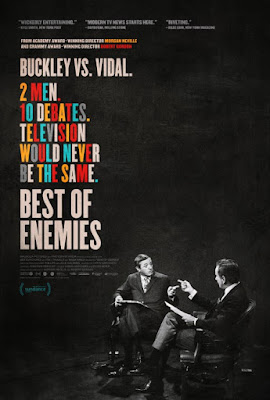 Political and socioeconomic unrest reached over a boiling point in the American late 1960’s as the politicians were busy with the presidential nominating conventions. Civil Rights Movement, Sexual freedom and Vietnam War became the vital talking points for outstanding intellectuals. It was also the time when US politics and the theatrical aura of television shows amalgamated to give way for ‘Live’ political debates. Directors Morgan Neville (won an Oscar for the doc. “20 Feet from Stardom”) and Robert Gordon’s “Best of Enemies” (2015) fixes the series of Live-TV debates between political luminaries William F. Buckley, Jr. and Gore Vidal, as its condensing point to highlight how it has led to the modern, on-screen clamoring of political nitwits.

“Best of Enemies” is also one of the most lamentable tales since Gordon and Neville sheds light onto the psyche of these two brilliant thinkers, their egos and existential crisis. The documentary commences with a quick introduction about the highly competitive American television news circuit during 1968 summer. Republican and Democratic Party conventions for the upcoming presidential elections were going on full-fledged, but the ABC television network suffered in the hands of its counterparts CBS and NBC due to its inability to provide the ‘gavel-to-gavel’ coverage. As the former President of NBC news clearly puts forth: “ABC was the third of the three networks. Would’ve have been fourth, but there were only three”. 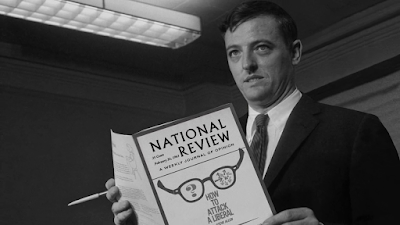 William Buckley, the prominent conservative political commentator was once asked, if there was anybody he wouldn’t share a stage with. Buckley said he would refuse to talk up with a communist, or Gore Vidal. The mutual antipathy between these two men suddenly gave ideas to the studio-heads of ABC and so they concocted 10 televised debates, which slowly turned into a ratings-grabbing, firebrand show. Both William Buckley and Gore Vidal had experienced resounding defeats and staggering successes in their lives. Buckley and Vidal were beaten down in their desire to run for political office (in the early 1960’s). However, Buckley became an eminent host of right-wing talk show ‘Firing Line’, while Vidal got busy with writing acclaimed works, including the scandalous, satirical novel "Myra Breckinridge”. 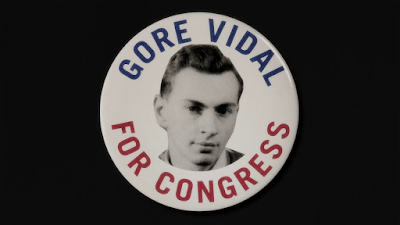 Gore Vidal and Buckley’s animosity seems to have not just developed from their difference in opinion over political ideology or sexuality (Gore despite being called as gay literary icon, refused to identify himself as homosexual. In one of his famous remarks Gore said: “Actually, there is no such thing as a homosexual person, any more than there is such a thing as a heterosexual person”). They just hated each other as a person. As one guy says in the doc., “Their confrontation is about lifestyle; what kind of people should we be?” Their mutual hatred reaches a culmination point at the Chicago’s Democratic convention as Vidal in the flow of the argument calls Buckley “a crypto-nazi”. To which, Buckley angrily hisses in live TV show saying “Now listen you queer, stop calling me a crypto-nazi or I’ll sock you in your goddamn face and you’ll stay plastered”. 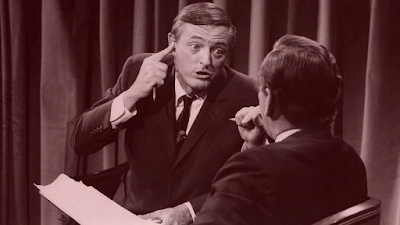 The strong words from Buckley are shocking even in this deplorable name-calling political climate. It’s considered as a great breach of conduct and Vidal has taken it as victory over his arch-rival. Directors Neville and Gordon makes it clear how this vital moment in the debate haunted the lives of both men, till their death, and how it forever changed the way politics is discussed on TV-shows. The highest ratings rewarded by the viewers at the end of Vidal-Buckley made TV networks to embrace verbal fisticuffs of political pundits. The 10 part televised debates has in an obscure manner played a leading role in transforming political talks to a theatrical performance. Today, in all democratic nations across several languages, we could see corporate & social media encouraging political demagogues (or even nitpickers) to tear down their opposers rather than discussing on mutual agendas.

By perfectly staging the life events of Buckley and Vidal, before and after the debate, the directors were able to make us understand how these men were product of their own desperate era. But, what these men couldn’t understand then (which the director duos puts rightly in context) is that, they are going to become precursors of metamorphosing political landscape. Neville and Gordon were shrewd in their execution. They have impeccably created the political atmosphere of American 1960’s through perfectly placed historical footage. The sidelong commentary from former studio-heads, biographers and journalists highlights the importance of this rivalry within the contemporary realm and also allows for an uncanny reflection into the lives of Vidal-Buckley.

“Best of Enemies” (87 minutes) is one the most entertaining & illuminating documentaries to showcase how broadcast media and two great minds turned political discourse into a blood-sport.

Best of Enemies -- IMDb
at November 25, 2015
Email ThisBlogThis!Share to TwitterShare to FacebookShare to Pinterest
Labels: documentary