The Wind Journeys [2009] – A Meditative Trip Repleted with Stunning Aesthetics 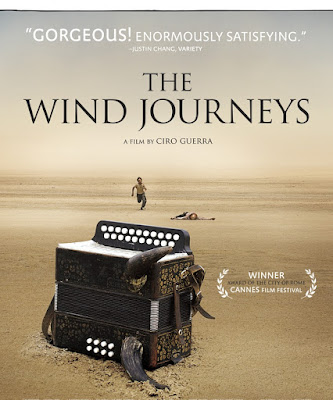 The South American rain-forest country Colombia is famous for its culturally-rich carnivals, among many other things. The ethnically diverse rural side of the nation – populated by natives, Spanish colonists and Africans brought as slaves – is said to place huge importance on music. The traveling musicians, called as ‘Troubadours’, are seen as valued member of the society. The accordion players and drummers are the only source of entertainment for the hard-working, impoverished farmers of rural Colombia. Music festivals like the famous ‘Vallenato Kings Festival’ (vallenato means ‘born in the valley’) would make the great peasant musicians and folk singers to gather in small Colombian villages for fierce instrumental duels. Colombian film-maker Ciro Guerra’s protagonist in his second feature-film “The Wind Journeys” (“Los viajes del viento”, 2009) is an aging troubadour/accordion player, who is literally and metaphorically at cross-roads in his life.

“The Wind Journeys” has a simple, thin story-line: an elderly Vallenato musician, Igancio Carillo (Marciano Martinez) is on a quest to return his accordion to its rightful owner – Ignacio’s old master. Ignacio is accompanied by a young wanna-be musician Fermin Morales (Yull Nunez), who wants to be a famous wandering musician. Ignacio has no sweethearts waiting. In fact, he has recently buried his beloved wife and vowed to not play the accordion. The Morales in Fermin’s name is derived from his mother’s husband as he doesn’t know about real biological father, who is said to be some wandering musician. One is in search for solitude from his exhausted career, while the other is in search of a career to be in peace. So, its plot structure could make up for a typical ‘in search of a father/son figure’ movie, but “Wind Journeys” in many ways remain distinctive, thanks to Guerra’s subtle tones and ponderous rhythms plus the spectacular landscapes. 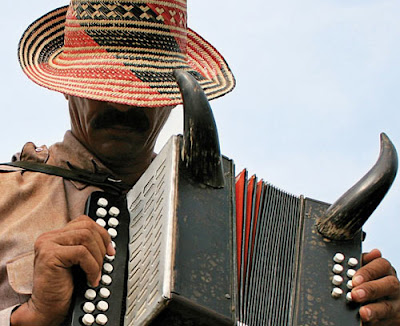 The movie is said to have been filmed in nearly 80 locations around the less explored (cinematically) rural, northern coasts of Colombia (Guerra’s first movie “The Wandering Shadows” (2004) was a travelogue and so is his upcoming film “Embrace of the Serpent”, which was filmed in Amazon jungle). The cross country journey made by Ignacio and Fermin takes the viewers through remarkable and varied areas of snowy mountain ranges, lagoons and deserts. Director Guerra’s DoP Paulo Andres Perez employs sweeping wide shots to showcase the majestic glory of the land. The geographic locations itself plays an important role in the character transformations and renders a refined episodic quality to the proceedings. Ignacio battles in an accordion duel, while he also plays in the background for a life-claiming duel. Cattle rearers and poor farmers from the villages easily recognize as if he was local mayor or priest. We see brutish plantation owners asking musicians to play their favorite tunes, in the same manner a king uses jesters in their court. There are also unexpected, sublime moments, when Ignacio plays music from the heart.

Guerra imbues the Latin American brand of magical realism in his script and images. Ignacio’s accordion is decorated with a pair of painted horns and a folktale behind the instrument is that it was received by Ignacio’s master as a prize for winning duel against the devil itself. The narration is filled with similar cultural tidbits, which makes the changing landscapes more magical. The mythical tales and wonderlands, however, don’t eschew the harsh lifestyle endured by the people. Guerra never ignores the characters’ woes and the society’s afflictions, but the folk sensibilities and local musical influences convey how elegant these people are in accepting life as it is. Guerra uses dialogues only to provide us some information about Ignacio’s troubled past and the present existential crisis. For the most part, as in a Herzog or Terrence Malick movie, the images speak a lot, while the characters find it hard to express themselves.

The conversations aren’t written in a cinematic fashion and no definitive answers are provided in the end. Guerra doesn’t even film the customary goodbyes (typical in Western road movies) or goes for sentimental close-ups, when the two main characters are soothed by their companionship. Cynicism is kept at bay, especially when myth, customs and superstitions crisscross the journey. As the journey is punctuated by outbursts of violence and supernatural evocations, we expect the film-maker to adopt a cynical tone; the urge to comment on the absurdity of Ignacio’s quest. But, this absence of cynicism is what adds strength to the narrative’s contemplative, mysterious tone; it is what renders the amazement in seeing in a culture, not unhinged by sleek appliances. Most of the performers in the film are non-actors, playing their real-life parts (Martinez playing Ignacio was a real Vallenato musician).

Great film-makers and critics often comment that cinema’s true ability is to make invisible things visible. “The Wind Journeys” (117 minutes) portrays emotions, customs and natural beauty that are otherwise invisible to our modern, misanthropic eyes. It would be a tedious affair for mainstream viewers, but a perfect journey for those seeking remarkably mature & restrained cinematic experience.