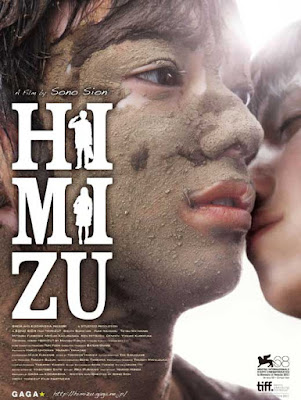 Critics fondly call Japanese film-maker Sion Sono, a punk auteur of the 21st century cinema. Of course that tag doesn’t do full justice to a film-maker, who has in the two decades provided extensive and varied body of works that range from bloody guerrilla-style films (“Hazard”, “Why Don’t You Play in Hell?") to surrealistic tales of abuse (“Suicide Club”, “Strange Circus”) to epics and biting psychological character studies (“Love Exposure”, Cold Fish”). Nevertheless, Sono’s works are definitely not for all. His penchant for framing assortments of perversity and anarchist behavior would rattle viewers not interested in darkening subject matters. Sono’s 2011 movie “Himizu” may not be his best, but it’s definitely one of the boldest works, where Sono was able to expand on his trademark themes as well as able to diffuse several new stressful themes. It was also one of the director’s most compassionate works with less violence and perversity.

“Himizu” was based on a manga series of the same name from 2001-02. The manga series portrayed the grim story of a middle-school boy Sumida. Sono updated the script by setting Sumida’s restless spirit against the backdrop of ferocious 2011 Tohoku earthquake and tsunami (Spike Lee’s “25th Hour” was adapted in similar manner from David Benioff’s novel). The initial shots set in the aftermath of earthquake lend a post-apocalyptic feeling and in the course of the narrative, Sono along with existential crisis of a teen was able to tell wider societal implications of the disaster.  The 14 year old protagonist Sumida (Shota Sometani) lives in a decrepit lakeside shack with an alcoholic mother. In the evening, after school, Sumida rents out boats for tourists, but the humongous disaster has curbed the business prospects. Only a warm community of homeless men and women gather around Sumida’s house (including an elderly man named Yoruno who claims to be a company CEO, lost everything to earthquake). 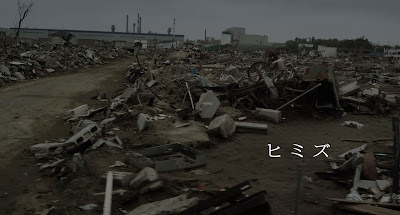 Sumida’s father is a deadbeat, who often beats the boy for money and repeatedly states, how great it would be if Sumida had drowned when he was meant to, so that he could have claimed the insurance money. The exuberant teacher at the junior-high class asks Sumida to have a ‘dream’, but the boy replies ‘A boat shack’s fine; Ordinary is the best’. In fact Sumida’s aim is to live like ‘himizu’ – an indigenous shrew mole of Japan. Apart from the homeless, the only person cares about Sumida’s well being is a self-confessed stalker classmate, Keiko Chazawa (Fumi Nikaido), who was written all the words Sumida has uttered in school and pasted it in her room. One day, the boy’s mother runs off with a stranger, leaving a note ‘have a nice life’. Later, Sumida is brutally beaten by Yakuza gang, to whom his father owes a lot of money. All this physical and emotional tortures pushes Sumida to embrace a homicidal madness. As the boy struggles to find a way from the doomed future, he encounters soulmates, fully consumed by the societal madness. 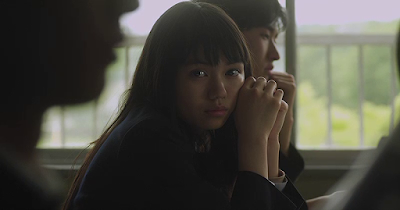 As usual, director Sono seamlessly establishes the cruelty of the world Sumida inhabits through impeccable visual palettes (littered with rubble and muddy riverbanks) and painfully real human characters. Sono takes the post-tsunami devastation images of Japan and subtly uses it as a symbol for a repressed society that is barely holding itself together.The repeated abuse of the younger people might be viewed as over-the-top (Chazawa’s parents has built a gallows for the girl to hang), but these abuses could be taken as a metaphor for how elderly statesmen of the government have abused the general public’s trust in them (like smothering the implications of a nuclear disaster). Sono’s vision of school only seems to provide that common, useless platitudes like ‘I’m a flower, one of a kind’, whereas the students are thrown at immeasurable societal challenges. 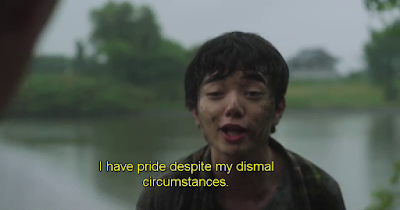 “Himizu” is diffused with Sono’s thematic trademarks as well as differs a lot from the previous works. The extraordinary surrealism, heightened approach towards perverseness and violence depicted in Sono’s ‘Hate Trilogy’ (“Love Exposure”, “Cold Fish” & “Guilty of Romance”) has been replaced with a sense of optimism and more grounded characters. The number of selfless characters in “Himizu” provides tough fight to the gang of abusers. Despite her eccentricity, Chazawas comes off as the altruistic character capable of transcending the Japanese psyche with a distinguished better future. Child-like Yoruno (played to perfection by Tetsu Watanabe) represents a older generation that seeks redemption for the sins of past. While, Sumida is beaten up by the Yakuza member, Yoruno chimes in and asks to be beaten for the debt owed. He also makes a statement “It’s only six million! You beat up a little boy for that amount”, which insists on the triviality of the conflict, compared with the larger environmental threats. 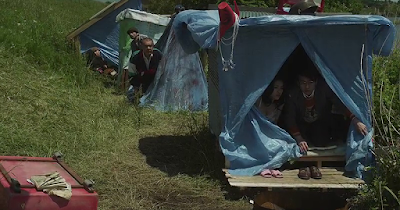 Sono’s has the ability to transform a seemingly random encounter into a sequence that resonate his favorite societal themes. In one inventive, gutsy scene we see pair of inexperienced burglars hiding from the house owner, a neo-Nazi who watches the news report on Fukushima disaster implicating the government officials. The person in TV states how Japanese always use the excuse ‘that they’d come too far’. The same excuse in a subtle manner is used by all the characters over the course of narrative (the burglars goes too far by not just robbing but also killing the neo-Nazi). In another scene, a perplexed young man is caught before he tries to stab a man, singing on stage. He asks “Who Am I?” which is a question that haunts Sumida’s mind (referred in the poem he recites) and confronted by an entire society in the aftermath of disaster. “Himizu” drew a lot of attention for its public stabbing sequences, especially after the recent confession of ‘Charleston Church Shooting’ suspect Dylan Roof stated that ‘Himizu’s’ teen protagonist inspired him to commit the act (Roof’s website had Sumida’s words “Even if my life is worth a speck of dirt, I want to use it for the good of society"). 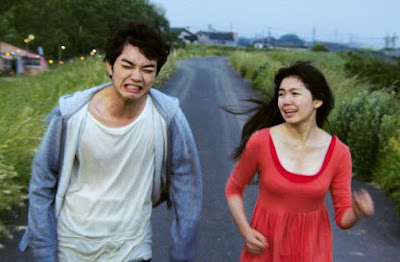 Sono’s work, nevertheless, doesn’t encourage violence to get rid of angst. In fact, the film insists on love, hope for such endlessly abused people. The public stabbing spree witnessed numerous times by Sumida actually happened in Tokyo’s Akihabara district. The incident on Akihabara left 10 injured and seven dead (all are pedestrians) and similar kind of incidents happened in Hiratsuka Train station, Tokyo supermarkets, etc. A Japanese Criminal-sociology specialist commented on a ‘Seattle Times’ article that "the number of isolated young people in society is increasing. Many people feel that the competitiveness of Japanese society has made them outsiders.” Sono accumulates these harrowing real-life incidents to strengthen his viewpoint on the pressures faced by Japanese teens (in the film, the youngster stabbing in the bus  shouts "Don't I have a choice?"). He subtly notes the irony in the speech of the schoolteacher, who persists on individuality as well as the need for all to have singular vision to build the nation. The mid-part where Sumida wanders through the city with a misguided idea of activism does seem a little too long & repetitive. But, the ending is one of the best in Sono’s films. As Keiko persistently shouts “Sumida! Don’t give up!” to the salvation-seeking young man, we feel how compassionate, hopeful and unpredictable this Japanese punk auteur could be.

“Himizu” (130 minutes) is a bold, stinging examination of existential and moral crisis faced by an embittered youth and a devastated society.