You’re Sleeping, Nicole [2014] – The Emotional Malaise of a Adrift Adult 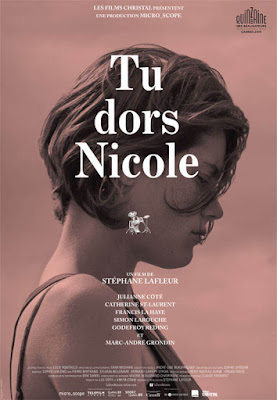 French-Canadian film-maker Stephane Leflaeur in an interview to ‘Twitch’ magazine says “I’ve always been a filmmaker with small ideas. I like this small territory I occupy. So I think I will keep doing this”. By small territory the film-maker means the way he impeccably captures the aimless & loneliness of young educated people, hailing from an upper middle-class with all kinds of sophisticated electronic equipment. Leflaeur, with his third feature film “You’re Sleeping, Nicole” aka “Tu dors Nicole” (2014) once again returns to post-modern alienation, where a idiosyncratic 22 year old girl is trying to figure out what to do with her life. If Leflaeur first two films “Continental, a Film Without Guns” (2007) and “Familiar Grounds” (2011) imbued a deadpan, nervous tone of Aki Kaurismaki’s oeuvre, “Nicole” very much looks like a younger & more meditative cousin to Noah Baumbach’s bittersweet “Frances Ha” (2012).

In “Nicole”, Lafleur maintains the offhanded surrealism & absurdist tone of his previous works. On the surface, the film could be labeled as a ‘black-and-white slacker movie’, but the nuanced characterizations never make it a derivative. Unlike the good American slacker films (example, Richard Linklater’s works), “Nicole” reveals its hidden depths through intermingled magical realism and less talkative, accomplished performances. The film commences with a recently graduated young girl Nicole (Julianne Cote) waking up naked, next to an un-named man. She slowly dresses as if her mind is thinking about the emptiness of the one-night stand and steps out into a sidewalk, where Nicole’s bike hitched to a fence along with many other bikes. That dreamy haze of a sequence tells a lot about the suburban girl with a puerile attitude. 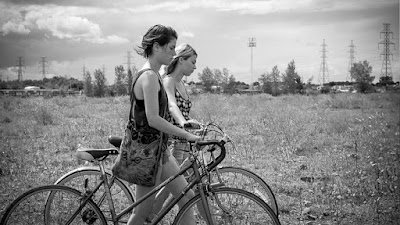 Nicole’s mom and dad are away on a long summer vacation and she’s been left with lot of instructions about tending the lawns, pools, fish-tanks, etc. She spends her day working in a dead-end job at the local charity store. The rest of the time she hangs out with her best friend Veronique (Catherine St-Laurent) discussing about former boyfriends and planning out what do for the summer. Just as Nicole is happy about having the house to herself and Veronique, her elder brother Remi (Marc-Andre Gronin) arrives with two other band-mates – Pat (Simon Larouche), a married man who’s about to become a father and nonchalant drummer JF (Francis La Haye). Armed with a new credit card, Nicole decides to take a trip to Iceland with Veronique. The summer’s longevity and the characters’ aimlessness, however, diffuse them with new ideas as they become more emotionally distant from one another. 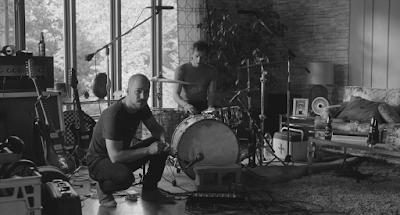 Director Leflaeur’s movie title is drenched with irony. Nicole seems to be suffering from insomnia throughout the summer who is little afraid to fully embrace the adulthood. To kill time, she walks around the neighborhood peeping through windows of still-awake neighbors. She even finds herself in a playground as her eyes seem to be thinking about the less arduous childhood. Nevertheless, the ‘sleeping’ refers to the somnabulant phase of Nicole’s life. It is an expression that indicates her ignorance toward squandered freedom and habitual depression. Nicole in a way thinks fun, freedom like boxes in an application form that just needs to be ticked-off to attain something. Her reply to the unseen one-night stand and her choice of vacation to an alienated land reflects this attitude. Audiences who hate to watch films that lack dramatic fireworks may see this film as one where nothing happens. But, Leflaeur elegantly nuanced script just suggests that a lot is happening under the surface, and waits for patient viewers to unmask them. 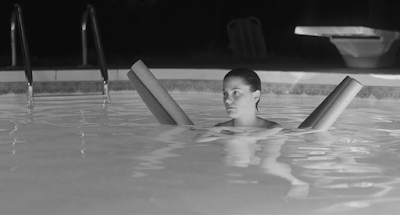 Albert Einstein said “Life is like riding a bicycle. To keep your balance, you must keep moving”. In the film, Nicole’s lock on the bicycle recurrently gets jammed, which somehow works like symbolization for her life’s immobilization. The sense of being stuck increases within Nicole as her romantic flirtations with JF are patronized (“You’re by best buddy’s little sister”) and when her friendship with Veronique goes through unexpected trajectory. Movies often tend to overly judge a young suburban adult, but Leflaeur makes us feel for the protagonist, stuck with indecisiveness. It is not that Leflaeur conceals the main character’s indifference and jealousy towards her peers; it is just that Cote and Leflaeur finds the perfect empathetic tone to make us care. The friendship between Nicole and Veronique also seems palpable with no sentimental turnaround. 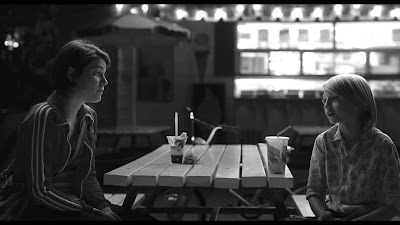 Director Leflaeur stays away from soaking the narrative with a false sense of charm or on-the-nose humorous tone. When an elderly co-worker tells Nicole to not stand too close to microwave since it might affect her fertility, she just does the opposite. Even this quirky humorous scene reveals about Nicole’s character rather than being simple gag. Leflaeur pitches up his favorite surrealistic tone with the character of Martin, a ten year old boy with an adult voice and is in love with Nicole, his former babysitter. Martin’s initial conversation with Nicole seems to be discarded joke, but Leflaeur gradually adds depth to the boy’s character, making him to be a contrasting persona when compared with Nicole. There’s also another wonderful surrealistic sequence involving a middle-aged man driving around circles in the neighborhood with a toddler on the back-seat.  Sara Mishara’s astounding black and white cinematography provides timelessness to the characters’ inner conflicts. Leflaeur and Mishara opt for a straightforward but resplendent mise-en-scene in which we are able to observe the people on-screen without any preconceived notions.

“You’re Sleeping Nicole” (93 minutes) transcends its generic story-line about the indecisive phase of adulthood into a deliciously contemplative movie experience, with subtle characterizations and gorgeous frames.

You're Sleeping aka Tu dors Nicole -- IMDb
at November 03, 2015
Email ThisBlogThis!Share to TwitterShare to FacebookShare to Pinterest
Labels: Coming of Age Movies, Surrealism