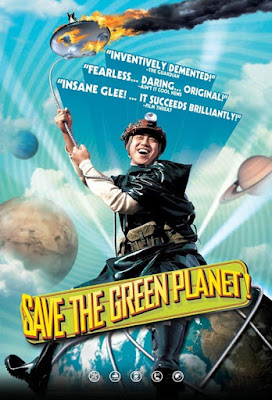 Genre-blending exercises are often seen as a risky venture as many would be ready to pounce on a movie for not following a distinct, identifiable path. Indian mainstream films often blend genres, but mostly to a migraine-inducing effect. Even in the best genre-blending Indian movies, melodrama or colorful songs serves as a much required connecting bridge to ease the audience. A mad-cap energy and unchecked ambition are eschewed out of these Indian masala films. Kamal Haasan’s “Abhay aka Aalavandhan” (2000) is one fine example for an Indian film that tried to coalesce endemic sub-genres with unlimited energy. It tried to be an action thriller (the kind we witness in Hong Kong films); a stoner/psychopath film (as in Hollywood); a romance; a psychological thriller; and also incorporated Bollywood-style songs. Of course, some worked and some seemed totally out of place, but these impulsive tonal swings are something we rarely experience in cinema. Korean film-makers, like their Indian counterparts try to make poly-generic films and over the decades, they have mastered this skill than Indian film-makers.

Bong Joon-ho is one such excellent poly-generic film-maker (“The Host”, “Snowpiercer”). But, Jang Joon-hwan’s “Save the Green Planet” (2003) is one of the most wildly veering, genres splicing Korean film that reached the same fate as “Abhay”.  The posters of the film would make you think of it as an offbeat sci-fi comedy. It could be a macabre comedy as the opening sequence suggests or a wacky romantic comedy, a police procedural, demented serial-killer movie, an alien conspiracy tale as the later acts hints at. “Save the Green Planet” incorporates all these types along with a rich sociopolitical subtext. The film opens with the voice-over of Lee Byeong-gu (Shin Ha-kyun) explaining to his acrobat girlfriend Soo-ni (Hwang Jeong-min) about the plan of masquerading aliens to take over Earth at the next Lunar eclipse (as we saw in Hollywood films “Invasion of Body Snatchers” or “They Live”). Lee is convinced that CEO of a renowned chemical company, Kang Man-shik (Baek Yun-shik) hails from “Andromeda”. He suspects Kang is the leader of aliens’ conspiracy to exploit Earth’s natural resources. 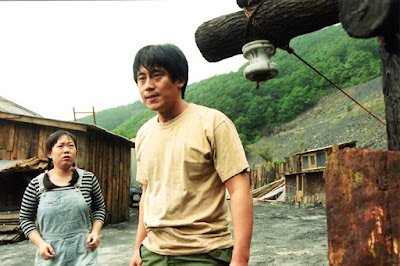 Lee also believes that by kidnapping and torturing Kang, he could learn lot about the ‘royal genetic code’ and that through Kang, he could destroy the ‘Andromedan Prince’, who is about to arrive on Earth by the lunar eclipse. Lee and Soo-ni kidnaps a drunk, uncooperative Kang in his underground garage which lends for a wonderful blackly comic sequence. Lee is always armed with a pepper spray, a weird helmet and a garbage bag garb, which according to him are the best elements to defend and block alien brain waves. Kang’s head is first shaved as Lee believes hairs for the aliens are some sort of signaling device. The kidnapped CEO is placed in an underground lair of Lee’s isolated hillside home, which previously served as bathhouse for coal-miners. Lee works as a honey-bee farmer and in the leisure time, he either tortures Kang or designs mannequins for local shops. 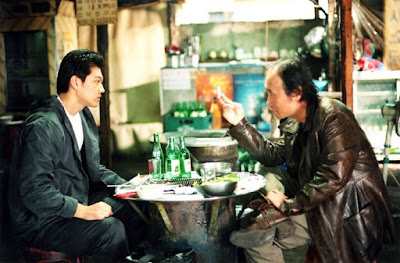 The bigwig Kang is also the son-in law of police chief and so the search for him becomes the first priority. An ingenious ex-detective Chu (Lee Jae-yong) and a disgruntled young detective work together secretly and make headway than the incompetent police force, which falls for contrived evidences from Lee. Gradually, it is revealed that it’s not the first time Lee has kidnapped someone. He had done prior experiments on other suspected aliens, although it produced no valuable results. For Lee, Kang looks like the perfect alien, since even under chains and after all the torture, Kang talks in a lofty, influential manner. Nevertheless, Kang remembers Lee, who before spewing alien-conspiracy tales worked in his chemical company. It is then we are filled with Lee’s backstory and what caused this alien invasion paranoia. 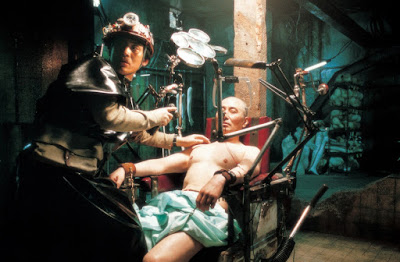 Jang Joon-hwang exhibits relentless energy as a director, especially for a debut feature (unfortunately Jang only made one full length movie after this). The director is at his best in designing the dark humor sequences, in poking fun at the messianic complex of American heroes, and when Kang & Lee play their mind games. Jang’s directorial approach loses some energy when it veers to be an intelligent police procedural. The film starts off as an amalgamation of different genre approaches and appeared to rely on the question of ‘is he insane or not’? However, as the narrative progresses, there was genuine character development and multiple-layers associated with Korean sociopolitical climate are revealed. In fact, what tried to be a goofy, violent comedy transcends to pose contemplative questions on the human condition. It isn’t that the script is devoid of contrivances. It has the usual dose of Korean melodrama and an extended climax that tries too much to increase the ambiguity.  But, its manic originality is something we can’t banish as a nonsensical drill. 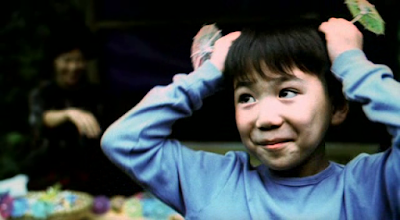 The elegantly conveyed backstory, the film’s larger message and an impeccable production design definitely demands a second-viewing. Bullying is one of the primary themes explored in the film. Bullying of strong against weak and the man’s bullying nature towards the environment seems to have played a vital role in protagonist Lee’s transformation. Director Jang draws wonderful parallels from the exploitation experienced by Lee in the society with the industrial exploitation spear-headed by governments and corporates. Jang’s choice of Kangwon province as Lee’s abode is said to lend the socioeconomic significance to the tale. Kangwon, now a rich casino land, once was a coal-mining town. In the 1980’s when the government took forward its ‘improving economy’ agenda, the miners lost their jobs, which later resulted in protests and bloodshed. In the narrative, CEO Kang and insane Lee gradually transform to become symbols for the persistent struggle between rich and poor. In the cases of demented killers, the question of nature vs nurture is repeatedly raised. Here, Lee was badly exploited by both nature as well as nurture. 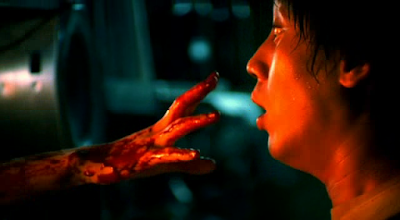 “Save the Green Planet” (118 minutes) is a wildly innovative effort that tries to avoid clear-cut generic labeling. Not everything works here in this genre-blending flick, but it should be watched for its unbridled energy and fascinating emotional core.