A Convoy Cruising Through Dichotomized Landscape 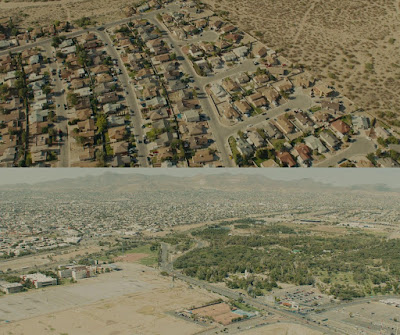 Dennis Villeneuve’s obscure thriller “Sicario” opens with Jonas Jonasson’ relentless, throbbing music as we see a SWAT team quietly surrounding the suburban neighborhood in Arizona, USA. Despite that pulsating sound, we do feel a poetic calmness, while looking at the film’s protagonist Kate Mercer (Emily Blunt) cruising in the bulky SWAT vehicle with her Kidnap Response Team. The faces of the team members sitting inside that brooding vehicle glistens when sunlight streaks in subsequently followed by enshrouding darkness. A little later, the brooding silence lying beneath that pulsating background music paves way to nauseating violence as the SWAT vehicle bulldozes through the suburban house, taking down its gun-toting residents. Through these initial intense visuals, director Villeneuve and his master cinematographer Roger Deakins showcase the obvious duality, only to prepare the viewers for furthermore complex dichotomies in the narrative, entrenched either in the landscape or in human mindscape. Made on a budget of $32 million, a lot of the tension in the visuals of “Sicario” is derived from keeping the viewer wondering ‘what’s gonna happen now?’ There are no high-brow action set pieces in the film. But, Villeneuve succeeds in imbuing the visuals with a dark energy and brings us into the world of its brooding characters in an effortless manner. He holds certain shots a little longer than some other film-maker and so even an image of dust in the sunlight adds to the organic visual sense of dread. 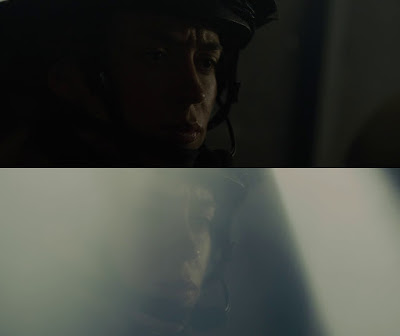 Villeneuve states that “Sicario” isn’t about America’s war on drugs (“I don’t think anyone will learn new things about cartels from this film” says the director). It is more about the director’s favorite theme: cycle of violence (“Prisoners”, “Incendies”, and “Polytechnique”). It is about dichotomized lands, separated by a thin border, where poverty and chaos lays side by side with wealth and peace. One is considered world’s most dangerous city, while the other eerily prosperous counterpart is known as safest city in the United States. As a New York Times article says “El Paso (Texas, US) and Ciudad Juarez (Mexico) lie together uncomfortably like an estranged couple, surrounded on all sides by mountains and deserts.” So, the US-Mexico border is more than simple, conceptual line in “Sicario”; it is more or less an interconnected ‘zone’, where the anxiety of one side heightens the violent transformation of the other. The aforementioned sense of dread plus the complicated, interconnected nature of the ‘border’ is wondrously intermingled in the movie’s hair-rising, spine-tingling sequence, where a convoy of Delta guys in their SUV’s has to march from El paso to Juarez and return back with a vital prisoner for questioning, without being gunned down by cartel men.

By-the-books FBI agent Kate Mercer isn’t sure what her job is, when she is recruited by an elusive government official Matt (Josh Brolin), promising to cut the head of cartel snake. She only gets to know that they are going to Juarez after boarding a private jet with Matt and his shadowy colleague Alejandro (Benicio del Toro). The fearless protagonist, Kate who also has an obscured vulnerable side, tags along hoping that she would get the bad, drug cartel guys. But, as estimated top-level guys have a hidden agenda. Before that particular intense border sequence, the tough Delta Force men are debriefed on their mission to transport the prisoner, sitting inside a Mexican jail. They are advised that a violent exchange with cartel is possible while crossing the US-Mexico border. The ‘border’ sequence opens with the beautiful aerial shots of the nearly aligned suburbs in El Paso. And as the aerial shot gazes toward the desert, it is cut to brief, establishing shot of the long border fence. While Jonas Jonasson throbbing music keeps us on the edge, we gradually catch the first sight of the cluttered Mexican city. It is immediately cut to the convoys cruising to border, staying close to the fence. Then, we see Kate, sitting inside on the SUV’s eyeing Alejandro, suited up with a vest and holding a machine gun. 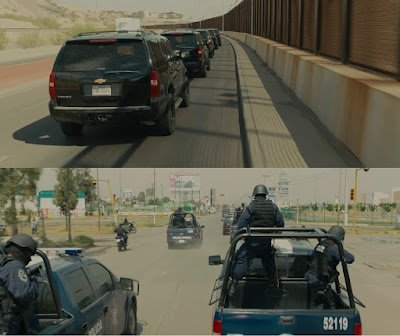 As the sprawling city of Juarez comes into view, the agent sitting in the front recollects US President Diaz’s visit to Mexico (it was the first for a sitting US President to visit a foreign country) and how despite an army of 4,000 men, the US President was made to feel vulnerable by a single guy waving his pistol to ‘blow the brains of President Taft’. “4,000 troops! Think he felt safe?” asks the guy, pointing out their own convoys’ vulnerability. And, as the convoy enters into Juarez, they quickly move through the border-checkpoint. Once again the aerial shot showcase the dichotomy of neat buildings with spacious car parks lying close to a city that resembles a bee colony. Immediately after the convoys’ entry, the Mexican police trucks accompany, with one uniformed guy at the back of truck, holding a machine gun. The invasion into the claustrophobic city-scape is gradually established, as in one circular shot we see group of neighborhood men playing and sitting in a bedraggled empty space, oblivious the noisy parade of the vehicles. Traffic is blocked as the convoy makes their way to the prison. Alejandro, for the first time in the trip, opens his mouth to say “Welcome to Juarez”, and at that point Kate Mercer looks out her window to see naked, mutilated bodies (missing heads or limbs) hanging upside down in the under-side of a bridge. The guy at front muses on the encountered murdering method of drug cartel: “It is brilliant what they do. When they mutilate a body like that, they make people think they must have been involved and did something to deserve such a death”. 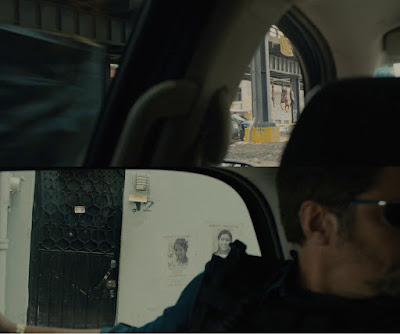 The convoy immediately stops in a street as the Mexican troops’ radio-in to wait, since there is a minor skirmish ahead. After the SUV coming to a halt, on one side we could see the walls strewn with posters of missing girls, hinting at the large number of female homicides and missing person cases in Juarez that started occurring from 1993 (Robert Bolano’s sprawling masterpiece novel ‘2666’ has a major section, documenting the murders and disappearance of girls in Juarez). The convoy then gets the signal to move through the narrow, zig-zagging road. The dread mounts to threshold point as shots of truck riding through the bumpy road are followed up with tense profile shots of Kate.  While the Mexican convoy waits, the US vehicles enter into the prison. The camera stays inside the vehicle as Matt and other officials are engaged in their formalities to escort the prisoner (they enter through a shutter that looks like a back door to the prison). The intuitive Alejandro predicts that ‘Nothing will happen there’ and also informs Kate to ‘Keep an eye out for the state police’. Once the prisoner is brought out and placed at vehicle in front, the convoy moves in the same steadfast manner. In the return journey, for a brief moment the tension heightens while a spotter vehicle accompanies the convoy in left lane of a parallel land. When the bridge is just klick (km) away the Mexican troops halt, and the US convoy hotfoots through the border checkpoint, only to find themselves stuck in a long line of traffic (a car is said to be broken-up ahead). 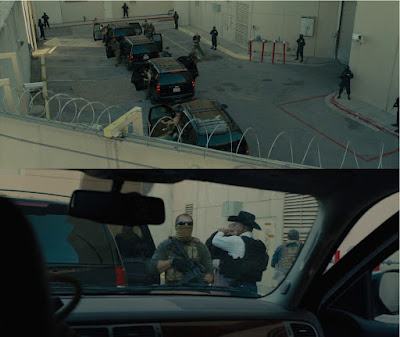 The tension builds to a whole new level as the convoy looks on the both side of the lanes to figure out the potential bad guys with an intention to reclaim the prisoner. The traffic in each parallel lane very slowly clears up and Alejandro is the first to spot a “Red Impala”, two lanes on the left, occupied by tattooed men. He asks Kate to take her service weapon out. The window glasses are brought down, indicating that they are all ready to engage in a gun fight with the possible suspects.  Then, three lanes left another ‘green civic’ is spotted, where the gun of the guy sitting at the back seat is clearly visible. They tensely wait, releasing the door locks, to immediately get out once the men in the car wave the gun in their direction. As soon as the door of Red Impala moves, the men from convoy surround both the vehicles and Alejandro tries to appease. However, as soon as the tattooed guy raises his gun, a volley of bullets pierces through Mexicans’ car. Kate is rattled by the shootout amidst loads of civilians in a border checkpoint. The guys in the green civic also meet the same fate as their compatriots. While the armed US men retreated to their vehicles, Kate from the rear-view mirror sees a man dressed in Mexican police uniform, aiming his gun at her. He misses but she shots the man down, emitting a exasperated ‘Fuck!’ The convoy starts moving and the guy at driver seat comments “This is gonna be on the front page of every newspaper in America”, for which the other guy replies “No. It won’t even make the papers in El Paso”. We know that it is a hard-to-digest, but truthful statement, since at least 30,000 people in the last few years were brutally murdered, all in the name of drug trade. Along with Kate our POV of 'good guys' view is shattered. We could say the tattooed Mexican bad guys got their comeuppance, but were the Americans carrying state-of-the-art really the good guys, trying to extinguish the brutal ways of drug trade. Eventually, Alejandro gets in at the back of the vehicle, gun raised above to hunt for more cartel criminals. The shot slowly moves away from the convoy and towards a man lying dead on the ground. 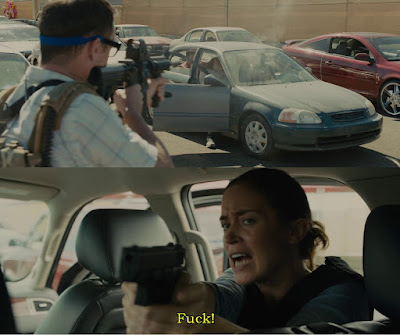 The whole convoy sequence is really a complicated thing to shoot as the aerial shots of Mexican border and Juarez city should perfectly merge with convoy on streets, snaking its way through the roads. The sequence was shot over five days and the shooting locations were said to have been constantly changed (due to security reasons). “That was such a jigsaw of how the hell we are going to shoot it” notes Deakins on the complexity of shooting this scene. This one long intense sequence was actually made by splicing together shots from three locations: overhead shots of real border, footage of streets in Mexico City (to resemble the streets of Juarez) and the final shoot out sequence (in the bridge) is shot on a parking lot in Albuquerque, New Mexico. The background of Mexico, we see in the distance for the shootout sequence is all digital components (nearly 150 cars were used for the scene plus a detailed story boards were made to grasp the logistical challenges.

The narrative hints at an unknown horror when Kate finds decaying bodies are hidden in the walls of peaceful, suburban neighborhood.  But, she grasps the unfamiliar horror only after journeying across the border. She also witnesses the dark side to the system (she believes in), which behaves as violent as its counterparts. The sequence is so much part of Kate’s character development. And, looking through all the overhead shots, interior frames inside the car and the high tensile lane gun fight, it is pretty evident how director Villeneuve with his exemplary technicians has meticulously achieved what that sharp sense of dread. The movie, on the whole, may have disappointed some, but the SUV’s traveling to and fro across the contrasting landscape, facing the ‘beast’ surely tells why Dennis Villeneuve is one of the exciting film-makers of contemporary cinema.

Thank you for your interesting and informative blog. I have enjoyed reading it and appreciate the work you have put into it. Here is some relevant information for you to review .
Kids SWAT Vests