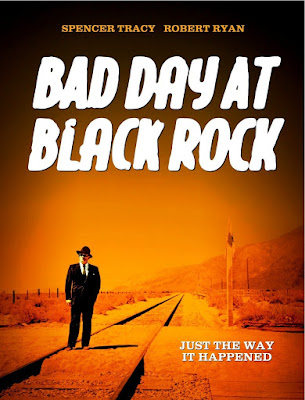 Paul Thomas Anderson once stated that he learned a lot about direction from listening to director John Sturges’ commentary track on the thriller classic “Bad Day at Black Rock” (1955). Such is the directorial craft of Mr. Sturges, who delivered action classics like “The Magnificent Seven”, “The Great Escape” and precisely achieves what he wants to, without making a lot of fuss. Known for his workmanlike resoluteness and evocative wide-screen aesthetics, John Sturges often chose stories involving tough men (not necessarily muscular) in desperate situations. “Bad Day at Black Rock” is one of his under-appreciated, self-conscious genre film, which amalgamates film noir tropes with that of Western. Shot in CinemaScope, the movie open and ends with a wide-shot of a dismal small town (Black Rock) and its rail-road station. In both the shots, we may only see the desolate structures amidst expansive emptiness. But, thanks to the enigmatic arrival of Mr. John Macready, the town’s timid inhabitants go through an internal change, purging their guilt-ridden subconscious.

The film opens with a series of stylistic, dynamic long shots of a train cruising through sweeping vistas of the desert. The train slows down while approaching a dilapidated, dusty strip of a town and we see some of the couple dozen inhabitants of the town, watching with anxiety. The year is 1945 and for the past four years, there were no visitors that led to halting of the train at ‘Black Rock’. A headstrong, one-armed stranger, who goes by the name John Macreddy (Spencer Tracy), dressed in a black suit (aka city clothes), descends from the train and as he stands alone in the middle of the dusty track, the visual crisply conveys his isolation plus the trouble he is going to face. The small community is gripped with fear & guilt, and wherever Macreedy turns for help he is rejected and at worst, beleaguered. Although the town has semblance of law in the form of drunken sheriff, it is mostly run by bigwig rancher Reno Smith (Robert Ryan) and his henchmen, Hector (Lee Marvin) and Coley (Ernest Borgnine).

Macreedy is just visiting the town for a day to meet a Japanese farmer named Komoko, who is staying in a place called ‘Adobe Flats’. After facing much hassle for just mentioning the name of farmer, Macreedy rents a jeep and visits the Japanese man’s place, which is actually burnt to the ground. He also apprehends that the farmer had met with a gruesome fate. Macreedy, with his missing left hand and black-suit, is often positioned in spacial contrast to Smith and his cohorts. He doesn’t show any unrealistic, macho bravado and is in fact terrified of getting trapped in the town, after learning the secret about Komoko. Nevertheless, his patience and crystallized reasoning digs at the apathy of town’s nominally ‘good’ persons like Doc (Walter Brennan) and young man Pete. 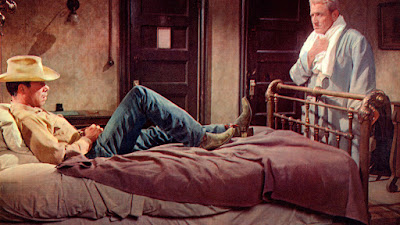 Millard Kaufman and Don McGuire’s script, based on Howard Breslin’s short story (“Bad Time at Honda”) directly tackles the less talked about internment of Japanese-Americans during World War II, after the incident of Pearl Harbor. Between 110,000 and 120,000 Japanese Americans were forcefully relocated to the camps in interior of US nation. Reno Smith referring the Japanese as ‘mad dogs’ and his own failure to get enlisted alludes to US war time policies. Nevertheless, Smith’s actions against Komako aren’t viewed as a jingoistic act; it is rather pertained to mankind’s fundamental flaws – greed & jealousy. The narrative structure that tracks one good man standing against band of hooligans, and appealing to passive stance of ‘good’ persons, immediately makes the film look like a companion piece to Fred Zinnemann’s “High Noon” (1952). Like ‘Black Rock’, the town of ‘Hadleyville’ (in “High Noon”) was also infected by collective fear and both Macreedy, Kane (played by Gary Cooper) are isolated hero figures, often seen walking through empty streets and rejected by apathetic beings.  While both films have a robust ending, supporting individualism, “Black Rock” withholds a hopeful closure, where simple reasoning wins over hypocrisy and hatred. 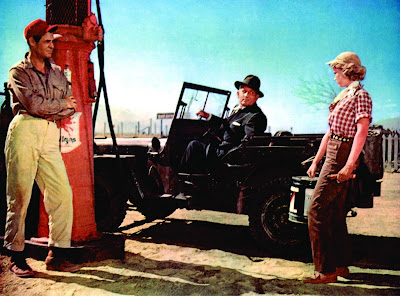 There are also quite a few obvious symbolism strewn across the plot – for example, Macreedy trying to escape the town by Doc’s broken-down hearse (a desperate last attempt). The surface plot of one virtuous man fighting against bigotry is also viewed as an allegorical indictment of the Hollywood Blacklist era. The town’s nominally good, but submissive people may refer to the actions of people, who adhered to baseless fear concocted by House of Un-American Activities Committee. Smith sees the intruder Macreedy as ‘carrier of smallpox’; as a threatening force to their ‘way of life’, which actually revels in prejudice, racism and cowardice. The script also refuses to transform Macreedy into a martyr (he may be want to bring out the truth, but at the same time he is desperate enough to survive) and Spencer Tracy with his trademark calmness and witty remarks perfectly embodies his characters’ righteous attitude as well as the inherent fear. Film scholar Dana Polan also points out the story’s reversal of the stereotype of evil coming from big city to spoil a town in Old West.

Director Sturges craftily mounts the tension with some excellent action-set piece (the car chase and final shootout in the canyon) and without disturbing the allegorical surface. His staging is absolutely amazing in the ‘diner’ scene, where Borgnine’s Coley gets his ass kicked by Macreedy’s karate chops. The encounter may not seem realistic, but Sturges has allowed the tension to reach a threshold point in the sequence and so the result is enjoyable to witness. If one has to point out the flaws, then it has to be some of the caricatured characters especially that of Anne Francis’ glamed-up character Liz. But, despite few minor missteps, the strong presence of Tracy and the excellent visual framework of Sturges subtly impart the profound thematic struggles.