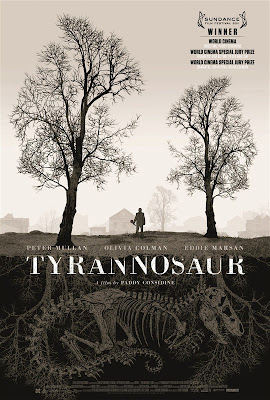 British actor Paddy Considine’s assured directorial debut “Tyrannosaur” (2011) isn’t about a carnivorous dinosaur, stomping people and swallowing them in one gulp. It is about humans possessed by uncontrolled rage, stomping the love within themselves and others in closer vicinity. The movie opens with its middle-aged, beaten-down, working-class British protagonist Joseph (Peter Mullan), coming out of the bookie’s office with a visible rage. His wife is dead, friends are dying and except for the dog Bluey, there’s no one left for him. And, so Joseph incurs his burning wrath on the faithful companion. He kicks it hardly and with a whimper, Bluey goes down. It is a brutal start, where the director signals us about the ‘Tryannosaur’ within the protagonist and that he is not an easy man to like.

On a side note, I’d like to say that the brutal killing of dogs, in movies enrages more people than the murder of a man in the opening shot. In the later circumstance, we would patiently wait for the film-maker to realize the circumstances behind it, whereas in the former one, we would immediately pass a judgment on the on-screen personality. So, it’s a brave attempt for a first time film-maker to visualize a dog-killing scene. Of course, the matter-of-fact staging seems a tad sensational, but the director doesn’t use violence as an attractive side-show. Considine, in fact, moves quickly to organically invest considerable humanity to the protagonist. “Tyrannosaur” is not only a character study about a damaged individual, but also an exploration of dilapidated existence, where violence cuts across class boundaries. An environment of punishment and humiliation steering the people to explode with misdirected rage. Joseph’s friendly kid neighbor Samuel is a victim of domestic abuse on the hands of his mum’s boyfriend. The despicable boyfriend has a pit-bull, mostly chained to his wrist. Samuel and the pit-bull are innocent beings, waiting to face the brunt of a ‘tyrannosaur’s’ rage. 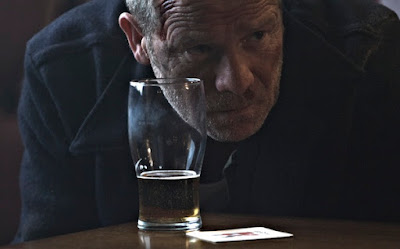 A chance encounter makes Joseph to meet a local charity shop worker Hannah (Olivia Colman). For Joseph, the middle-aged housewife with her ‘do-good’ sermons represents financially stable suburban dwellers, diffusing spiritual assurances like handouts. As expected, Hannah’s mention of God and charity kicks off the anger. To Hannah’s “You’re a child of God”; Joseph replies “God ain’t my fucking daddy. My daddy was a cunt, but he knew he was a cunt. God still thinks he’s God. Nobody’s told him otherwise”. The lines tell us about the domestic abuses Joseph might have faced and the rage passed on by his daddy.Nevertheless, our protagonist is also plagued by regret (for not showing enough love to his dead wife), which may be important feeling to his path for redemption. Joseph is also very wrong in his judgment about Hannah. She, the embodiment of love, has a ‘tyrannosaur’ at home, in the form of abusive husband (Eddie Marsan). He does unspeakable acts in the night, while inebriated and later, kneels like a lap dog, alleging “I’m sorry. It’s not the real me”. The apologetic Joseph does return to Hannah’s shop and despite their ostensible differences, a friendly connection is bridged, although the omnipresent menace shapes their fate. 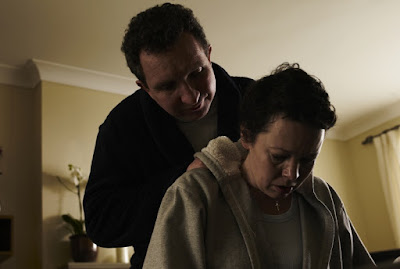 Paddy Considine, the actor best known for his lead roles in Shane Meadows' “Dead Man’s Shoes” and Jim Sheridan’s “In America”, has developed the story line of his 2007 short film “Dog Altogether”. As a director/writer, Considine takes a fine position in not showing too much of the violence on-screen. The implication of violence, in fact, distresses us more than the full frontal visual assault (however, the clear-cut showcase of horror at the end was little unbearable for me). Considine also remains sharp in setting the film’s mood right from the opening. Blunt force trauma faced by the characters is impeccably conveyed to us without ever resorting to cheap melodrama. The film-maker infuses enough empathy to understand Joseph and Hannah, but at the same he isn’t providing excuses for their behavior. When Joseph reveals the film’s strange title, relating the story of his wife, he’s honest about himself: “I thought it was funny. I was being a cunt”. And, although the source for Joseph’s rage is never clearly defined, that particular scene hints at the guilt over his treatment of wife, which may have subsequently kindled the self-hate (or else, it just could have come from abusive upbringing as Joseph kind of sees himself in kid neighbor Samuel). Special mention must go to the dialogues, especially the conversation between two central characters, devised with emotional closeness. 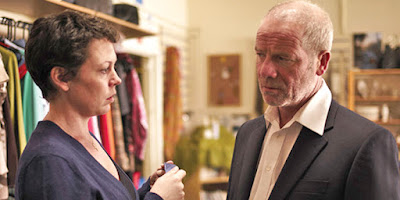 “Tyrannosaur” isn’t without its flaws. One thing I felt the movie could have done better is in achieving the emotional complexity. The tentative friendship between Hannah and Joseph is handled with great restraint. Their amicability is characterized empathy and understanding rather than hints of romance. To achieve this amicability, Considine particularly uses the sequence, where the central characters go to a funeral. Later in the pub, music flows and in an intoxicated mode, Joseph and Hannah witness some joy or a feeling of togetherness. But, then that mutual feeling couldn’t be tangibly felt as much as the initial trauma and rage. The use of montage to exhibit the happiness doesn’t work in realizing the elation or the change. In few other moments, like in the ending sequences, to strive for emotional complexity, the director rushes through the narrative. The theme of redemption comes clearly through the ending, but what misses is the organic flow, prevalent in the earlier ones. Nevertheless, those flaws are overcome to an extent by the first-rate performances of Peter Mullan and Olivia Colman. Mullan powerfully conveys the ominous mood that always threatens to overturn his emotional balance. Colman, whose works often restricted to comedy, shines as fragile woman pushed to the brink. Her collapses and retreats are heart-wrenching to watch.

“Tyrannosaur” (92 minutes) is a harrowing as well as a humanistic study about unrestrained anger and its damaging consequences. Its portrayal of violence may be difficult to stomach for few viewers, but it is worth watching for robust performances and searing honesty.