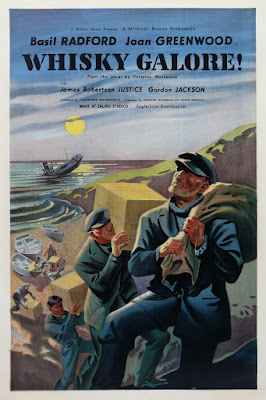 Film Historian Mr. Charles Barr writes, “In a business notorious for size and instability, for a rapid turnover of money, ideas and people, Ealing succeeded in keeping itself small and stable”. Between 1947 and 1955, British film production company ‘Ealing Studios’ made nine modestly budgeted, character-driven, quirky as well as gentle comedies (under the guidance of studio head Mr. Michael Balcon) that fetched immediate critical acclaim and commercial success. Ealing comedies combined humor with political and slight subversive subtexts. The studio's films celebrated communities, where lovable eccentricities, innocence and benevolence thrived. Nevertheless, Ealing Studio works couldn't be just labeled as 'homogeneous'. The studio’s two greatest films “Kind Hearts and Coronets” (1949) and “The Lady Killers” (1955) had a very sinister edge to it.

The year 1949 was one of the most important years for the Ealing Studio as between April and June of that year, three triumphant comedies were released – “Passport to Pimlico”, “Kind Hearts and Coronets” and “Whisky Galore!” (1949). Mr. Alexander Mackendrick, who is best known for his trenchant as well as satirical indictment of tabloid politics in “Sweet Smell of Success”, made his feature-film debut with “Whisky Galore!” (The Scottish-bred director made propaganda films during World War II for Ministry of Information). Based on Compton Mackenzie’s novel “Tight Little Island” (Mackenzie also wrote the script), the film reveals Mackendrick's early penchant for mixing gentle humor with subversive satire. The novel itself was inspired by a true account that happened in 1941, where a ship (SS Politician) carrying 22,000 cases of whisky sank off near the Hebridean Island (island chains off the west coast of Scotland) and the islanders rescued nearly 7,000 cases before the ship went underwater. 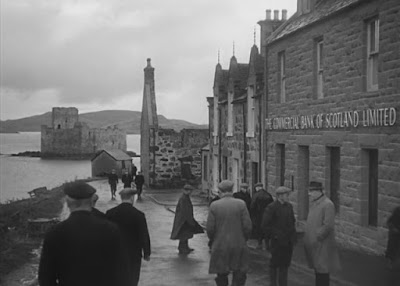 The opening shots establish the beauty of the (fictional) Todday Island and show the frugal lifestyle of the locals, depending upon sea. As the people of Todday are miles away from mainland and its entertaining arenas of dance or cinema halls, their only enjoyment is to drink whisky in the small tavern. But, in 1943 even that small pleasure is taken away from the Islanders; not due famine, but because of the very little whisky supply due to World War II limited rations. Few old men literally die for a drink upon hearing that disastrous news. One foggy night, a miracle happens, as a large ship gets wrecked near Todday’s coastline. The locals rush to save the ship’s crew and ask, “What’s your cargo”, to which they reply “50,000 cases of whisky”.  Few hours later, the Islanders rescue the whisky crates and stash it near a cave, in the shoreline (the ship sinks). But, there’s problem in the form of British Home Guard Captain Waggert (Basil Radford), who is keen to maintain the law and totally opposed to what he calls as ‘looting’ (Waggert’s relentless pursuit for the stolen booty does reminisces of the more scarier pursuit of Sergeant Howie, in “The Wicker Man”) 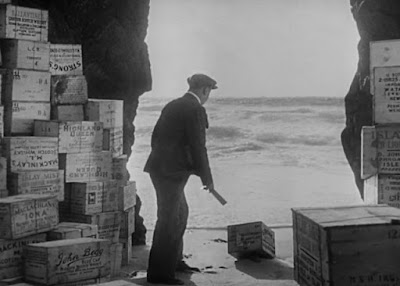 The humorous conflict between the uptight Englishman and the simple villagers makes Mackendrick & Mackenzie to make it as a tale of old school innocence versus contemporary modern authority. The film doesn’t extract raucous laughter from its initial frames. Director Mackendrick slowly sets up his array of characters in the first half, including the cultural, historical turbulence between the Islanders and stationed British guards. Th fascinating character portraits in the film includes a dying man, revived by the arrival of stolen liquor, post master Joseph Macroon, his attractive daughter (played by Joan Greenwood) and nail trimming customs officer Farquharson. But, the characters with scene-stealing antics belongs to Radford’s pompous Captain Waggert, rigorous Calvinist old woman Mrs. Campbell and her henpecked son George (Gordon Jackson). Most of these characters aren’t written to be plainly funny and they also don’t fit into neat moral categories. They either acts confused or remain puffed up with vanity, but still their predicament allows ample room for humor, since they feel authentic and their actions aren’t seen through judgmental viewpoint.

Another reason for the effectiveness of quirky comedy lies in the way, we see the unfittest group among society winning over big, bad bureaucrats.  This particular theme could be tracked into later era films, set in the Scottish isles, like “Local Hero” (1983), “Waking Ned Devine” (1998), etc. Although the excellent ensemble (composed mostly of non-professional actors) and fitting voice-over sets up the charming, mildly anarchic and funny tone for the narrative, it is Mackendrick’s astute direction that keeps us uniformly engaged (but MacKendrick was dissatisfied with his work as he later commented “It looks like a home movie. It doesn’t look like it was made by professional at all”). One of my favorite funny sequences that are embellished by direction happens when men try and hide their stolen whisky bottles as news of authorities’ arrival is conveyed. The men stash their bottles in gutters, empty water tanks, wells, rabbit holes, and even under a cradle.  There’s also a clever appeasement of moral guardians (who may find the tale of men finding happiness in whisky bottles to be morally incorrect) at the film’s end, where the narrator amusingly chronicles how the Islanders lived ‘unhappily ever after’. 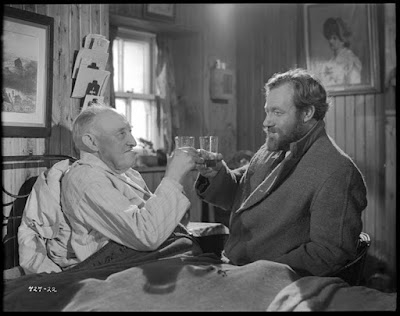 “Whisky Galore!” (82 minutes) is a remarkably funny classic that still remains universally appealing. Much of the humor in the film is not just derived from skillful gags, but from the clash of different personalities & culture.