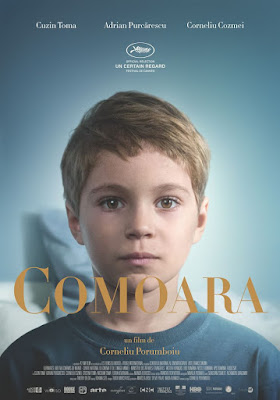 “It is nonsense to think of somebody without history since we are historical products” says Romanian New Wave film-maker Corneliu Porumboiu, who presents little moral stories layered with the country’s history of revolutions and nationalized regime. His “12:08, East of Bucharest” & “Police, Adjective” were social realist critiques on the post-communism and pre-revolution period of Romania, diffused with trademark Eastern European deadpan humor. Corneliu often takes a straight-forward, well grounded story and infuses whimsical elements to eventually turn it into a biting satire. “The Treasure” aka “Comoara” (2015) is Corneliu’s recent film, screened in the ‘Un Certain Regard’ at Cannes Film Festival and movie buffs considered it to be one of the most joyous movie experience of 2015 Cannes. As usual Corneliu extracts droll humor from the dry functionality of the nation’s bureaucratic and legalistic system. It is a quiet film (full of long shots & drab faces), which demands some patience from the viewers to grasp the funny layer beneath character’s deliberately banal actions.

“The Treasure” is a mixture of polarizing elements. That’s very evident from the movie’s initial frames. We see the protagonist Costi (Toma Cuzin) rationally explaining to his bitter son about why he had been late to pick him from school. The ten year old boy isn’t happy with his father’s explanation, who feels being let down. Later, Costi reads the heroic story of Robin Hood to his son. A story about properties and wealth, being taken from privileged and given to impoverished. As many historians and storytellers elucidate, the legend of Robin Hood makes him to be the foremost of the socialists. Now, both these become vital themes: Costi, the rational family man living a mundane life, wants to be the hero in front of his son’s eyes; the legendary tale indirectly evokes the Romania’s memory of past fights over land ownership. As the simple interaction between son and father goes over the reading of Robin Hood’s tale, they are interrupted by not-so-well known neighbor named Adrian, who bears the story’s fairy tale or whimsical element. 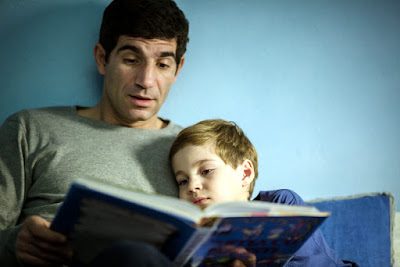 The neighbor Adrian, at first wants to borrow some money to pay off mortgages, interests, etc. Adrian’s publishing house has folded after the country’s financial crisis. Costi isn’t well off and he has his own debts too. So, Adrian goes off, Costi continues the story of Robin Hood, only to be interrupted once again by Adrian. Now the neighbor proposes a different, intriguing plan: to give money for renting a metal detector guy so that they both can go and search for buried treasure at great-grandfather’s family home. Adrian says whatever they discover it can be shared 50-50. The great-grandfather has buried this ‘treasure’ before the implementation of Nationalization policy of the previous communist regime in Romania (which cancelled land ownership or any private enterprises). The country’s communist regime went on between 1947 and 1989, where despots incurred painful memories on the citizens. Costi goes to an office to hire the metal detector. The old man at the office states that if they find any treasure (especially of national importance), it should be reported to the authorities, who will place it in the museum after giving 30 percent of its value to the owners. Costi agrees to go with Adrian’s plan, only if they do it proper by reporting to the authorities. 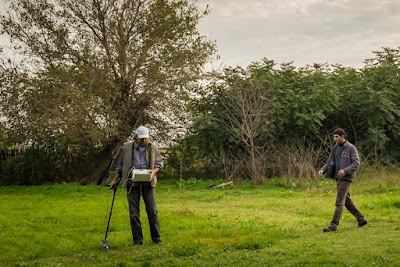 Corneliu Poromboui’s brand of Eastern European cinema is defined by two significant elements: penchant for absurdity; and the red tape bullshit spewed out by everyone. Apart from the conversation between the father and son, every simple exchange has the aura of business negotiation (including the discussion between Costi and his wife regarding their son, being the target of a bully at school). And, it is not just the conversation that’s reduced to bare minimum, even the atmosphere remains blank. Take a look at the clinically white house wall or the grey-colored office wall, nothing adorns it. The blank state of the walls and faces reflect how everything is uninteresting. The script is all about transcending this drab element to discover a new, fascinating aspect. When the film ends with the shot of bright sun and an upbeat, festival song (‘Life is Life’), we could understand how much the convoluted laws of their dreary existence are breached by a surrealistic, allegorical form – ‘the treasure’ (and it was very much an open ending). As usual, the absurdity is in abundance. Be it the petty quarrel between old, metal detector guy and Adrian or the policemen using the help of thief to open treasure box or the German ingredient within the treasure box, director Corneliu effectively satirizes the tale with absurd moments or things. The director also brings the Robin Hood’s wealth sharing theme, hinted at the start, to a full circle in the end, when Costi visits the jewellery shop. That final scene is one of the movie’s most beautiful moments since not only the son has got his wish for heroic father, but also a re-conquering of land and wealth (but, may be the director could also hint at the implicit nature of next generation’s greed in the scene at playground).

Aesthetically, director Corneliu initially employs simple shots to establish the interactions and the surroundings. While Adrian and Costi go for the treasure hunt, there are more long shots and the action essentially unfurls from Costi’s POV. The vast garden, its lightning struck tree are vital structures in the treasure searching part as much as the human characters. And, so the long shots convey the inherent possibility of getting lost or meeting up with failure. Director Corneliu was inspired to make this film from a similar kind of legend told by a director friend. He wanted to make a serious documentary on the subject, set around the friend’s old house. Nevertheless, he transcended the serious quest into a fiction, diffusing it with humorously quotidian human moments. Despite all the magical, sublime components, “The Treasure” somehow fails to be best of the director’s oeuvre. The dry humor is so juice-less at times, where the less patient viewers would be left to scratch their heads. But, at the same time this film remains to be the most unusually optimistic of Corneliu’s works or Romanian New Wave cinema.

“The Treasure” aka “Comoara” (89 minutes) is a dryly humorous morality tale that may divide the viewers, as some may declare it as ‘empty experience’, while pushing others to call it a ‘beguiling experience’. My movie experience obviously belongs to the later category.

The Treasure aka Comoara -- IMDb
at April 14, 2016
Email ThisBlogThis!Share to TwitterShare to FacebookShare to Pinterest
Labels: Satirical Movies, Social Drama

Haven't watched this flick yet, will do so since I do like what you have written about it .