Scarecrow [1973] – An Elegy of Downtrodden Drifters 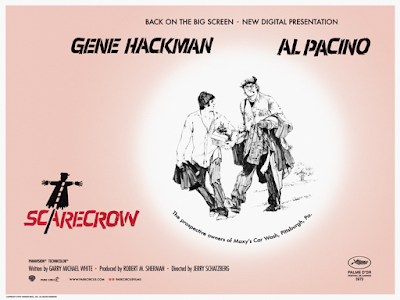 Jerry Schatzberg’s fascinating, low-key character study “Scarecrow” (1973) didn’t only went off the radar when it first released, but was also written off as ‘just another buddy movie’. The great performance of Al Pacino and Gene Hackman was mostly dwarfed by their other great performances in “The Godfather”, “Serpico”, “The French Connection” & “The Conversation”. Despite winning a Palme d’Or at Cannes, it received lukewarm response at the time of release. “Scarecrow” is a humanist story about the inconsolable losses, faced by two downtrodden people. Their cyclical losses become a lament for the blistering side of American dream. Yes, the script (written by Michael White) isn’t very organic, doesn’t quite work at times, and its metaphors are so often reiterated. But, still I think “Scarecrow” is an underrated cinematic gem for two reasons: the profound emotional depth of the central characters, achieved by two great actors of all time; and for the rich vistas of wastelands, crafted by Schatzberg and DP Vilmos Zsigmond (cinematographer of classics like “McCabe & Mrs. Miller”, “Close Encounters of Third Kind” and “Deer Hunter”).

The film opens marvelously with Max (Gene Hackman) walking in the sprawling landscape like a angry bear and laughably crosses the fence, alongside the road. Max’s clumsy behavior is observed behind the tree by Francis (Al Pacino), another drifter waiting for a vehicle to pass-by. Max only glares at Francis when he introduces himself and they wait on either side of windy rural road, where more tumbleweeds pass-by than cars. While they wait, Francis does clownish acts to appease the burly Max. When Max vainly tries to light his cigarette, Francis offers his last match and a kind of camaraderie is established. The sequence wound up with a picturesque long shot of field with the two silently gazing at the sun going down. Later, they travel together, rest at a squalid bar, where we learn the tidbits about their past and Max’s quest for future. 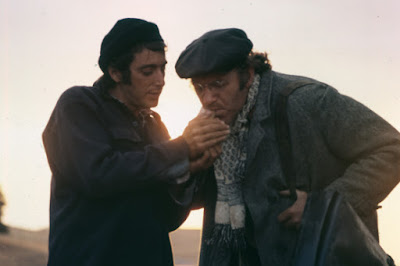 The temperamental with his steel-rimmed spectacles, layers of clothes, and flat cap is fresh out of prison from an assault case. He wants to meet his sister Coley (Dorothy Tristan) in Denver, then go to Pittsburgh to collect all his bank savings, and start his well-planned car-wash business. Francis had been in the navy for five years, after abandoning his pregnant ex-wife Annie (Penelope Allen), at Detroit. He doesn’t know whether he has a boy or a girl, and so he carries a gift box for his kid, with a brightly-colored lamp inside it. Max takes a shine to Francis and asks him to be his working partner. Francis Lionel Delbucci gets the nickname ‘Lion’ as Max doesn’t like Francis as the name of a partner. Francis with his ‘scarecrow theory’ and innocent friendliness is the exact opposite of Max, who quite often behaves like a cantankerous mutt. Of course, the freewheeling journey and outcast stature makes them develop a strong bond of friendship or brotherhood. And for the most part, their trip avoids generic trappings of bromance/road movies. The plot rather palpably deals with how their life-force is attacked and dreams threatened.

The script by Garry Michael White is definitely stagnates at times, but one most commendable aspect in writing is the infusion of a dark, melancholic tone beneath the humor. On the outset, when we grasp the characteristics of Max and Francis, we expect the funny, happy-go-lucky guy to instill hope in the life of the temperamental guy. It is the typical narrative arc used in buddy genre movies, but here the script transcends it. The change doesn’t happen in one end (on Max’s). It happens on both ends. For Max and Francis their respective anger and buffoonery is the way of circumventing the humiliation & shame, society throws at them. It’s like an inherent defense mechanism, which leads to their fall down as well. Max’s temper often gets him into trouble, but Francis’ clownish acts don’t save him from trouble too (in the end, only Max’s wrath helps Francis in the correctional facility).

Director & photographer Jerry Schatzberg, within his little body of work, have directed some fascinating works. Before “Scarecrow”, he directed the piercing drug addiction drama “The Panic in the Needle Park” (1971), which was Al Pacino’s second film appearance. While the ‘Needle Park’ confined to a little locale and focused themes, “Scarecrow” had a broader scope, in terms of geography as well as showcasing the emotions. Schtazberg had the flawless understanding of the acting talents in front of him (Bill Cosby and Jack Lemmon were previously talked for the roles). He just lets them take the command of the scenes, designing the perfect stagings (of course DP Zsigmond makes even the wastelands very beautiful). One of my favorite staging in the film happens at a later bar scene, where Max ludicrously does a striptease. It could easily be displayed as funny scene, but Schtazberg’ frames searches for pathos, in Max’s antic. In the scene, there is focus on Francis, who kind of sees how ridiculous his clownish philosophy of ‘scarecrow’ looks off, when seen from the other side. Francis does teach Max the need to be light-hearted (the final shoe-thumping of Max shows us that), but in that striptease scene Francis sees a reflection of himself, which doesn’t look great. The profound emotions in that particular scene would have simmered to the top, if not for the little directorial nudge and astounding performances.

The other well-staged sequence is the heartbreaking one, when Francis holds a child and walks to the fountain. Before that, Francis is sadistically cheated by his ex-wife Annie, when he calls her from the phone booth. When he comes out of the phone booth, his forlorn expression changes into a laugh, just like the way he thought ‘crows are not screaming but laughing at the scarecrow’. In that fountain scene, the locked scream inside Francis win over and kills his laughs, making him to take some child to give the baptizing his alleged dead child never received. Again, Schatzberg focuses on the beautiful angel statues, surrounding the fountain, and the gushing water, to make us understand Francis’ inner turmoil and the reason for his actions. The film was mostly said to be shot in sequences, which induces palpable sense to Max & Francis friendship. Before production, Hackman and Pacino were said to have journeyed around California, like the central characters, which impeccable works in favor of their screen dynamics. Both the actors make us swing with the emotions of primary characters, also allowing us to contemplate their existential alienation. Hackman and Pacino bring small, natural details to their characters that are more engrossing in a second-time watch.

“Scarecrow” (108 minutes) is a profoundly emotional story of societal alienation, championed by two great actors Gene Hackman and Al Pacino. Whether the damn crows are laughing or screaming, in the end, we would want these two estranged souls to succeed in life.

Oh, I'm gonna watch it! That man is too intense.

How did I missed a movie with two of the greatest actors ? will watch it asap