The Witch [2015] – An Arthouse Horror on the Frailty of Goodness 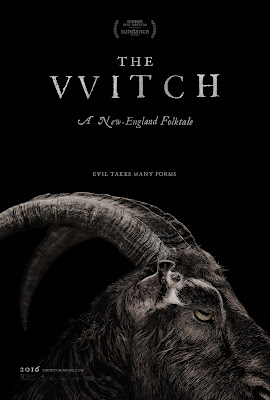 Robert Eggers’ feature-film debut, “The Witch: A New-England Folktale”, backed by Sundance Film Festival had one of the best trailers for horror film in recent times. It seemed to belong to Michael Haneke’s “White Ribbon” territory or Bergman’s “Hour of the Wolf” or Grimm’s tales, to recall an older reference. I adjudged that Eggers would go for a seeping atmosphere of dread and paranoia rather than giving jump-from-the-seat easy scares. The 17th century the Puritan family, especially the presence of a young girl indicated that the vital theme would be old Christian hegemony, which considered female anatomy as the menace of devil. So, is the North American wilderness going to deal with themes of paranoia and myths associated with lands? And I knew that this film isn’t going to be a commercial slam-dunk or cater to those expecting a sophisticated horror. “The Witch” does stay true to these expectations, perceived from its trailer, and at the same there are few disappointments too. However, the shortcomings of the themes are over-ridden by genuinely unnerving colonial America environment.

Independent horror films of recent years like Jennifer Kent’s “The Babadook” (2014) and David Robert Mitchell’s “It Follows” (2015) portrayed an aesthetic that tried to connect terrors to human feelings of loneliness, sexual desire and alienation. Fans who distrusted horror genre movie not being soaked in blood and gore hated these films, while others expecting a ‘Conjuring’ like ghost-hunting scares proclaimed ‘nothing much happens here’. But, with little patience and more focus, we can feel the dreadful atmosphere oozing from a long shot, showcasing man walking towards the camera in “It Follows” than in the blood splatters of modern horror flicks. Of course, those aforementioned independent horror films weren’t the first ones to have transformative horror boundaries. From Robert Wise’s “The Haunting” to Jonathan Demme’s “The Silence of the Lambs” (and how could we ever forget Friedkin’s “Exorcist”!) impeccably treated the psychological anguish of its characters as the primary horror element. It would be futile to compare Eggers’ work to masters like Robert Wise, Kubrick, Ken Russell, Polanski or Friedkin, but “The Witch’s” portrait of evil is open to interpretation and works at different levels, which is not just restricted to horror genre trappings. 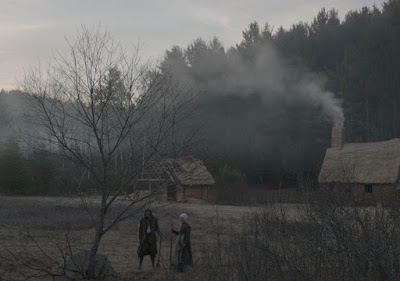 The movie starts on one cold, grey day in the 17th century New England plantation (year, to be precise is 1630). The family of William (Ralph Ineson) is facing a trial for some violation of doctrine of their Puritan Church. “I cannot be judged false Christians, for I have done nothing but preach God’s gospel” proudly claims William to the council. Pride, one of the sins, that leads to the exilement of Puritan family into sinister wilderness. William’s family consists of caring as well as stern matriarch Katherine (Kate Dickie) and five children: teenager Thomasin (Anya Taylor-Joy), pubescent boy Caleb (Harvey Scrimshaw), little twins Mercy and Jonas, and the newborn Samuel. The family sets up their farm on the edge of dark, towering forest. One day, while caring for Samuel and playing peekaboo with him, Thomasin loses the child to a mysterious entity. Patriarch believes it to be a wolf, but the children think of a witch cloaked in red, living deep in the forest. 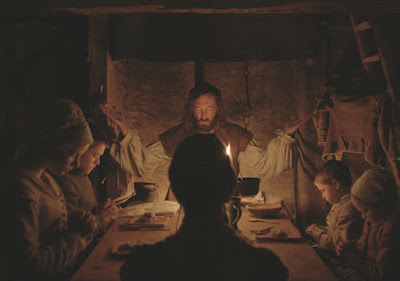 Of course, considering the title of film, the children’s fancies come true, and what happens to Samuel makes up for one of the film’s creepy sequences. The loss of Samuel strains the relationship between Thomasin and mother Katherine. The corns are affected by a plague and William is desperate enough to hunt animals for food and furs that he has secretly pawned his wife’s coveted Silver chalice cup. The Puritans’ faith rests on ages-old, neatly divide conception of good and evil, which causes Katherine to think that they are cursed. William thinks God is testing. Thomasin perceives her sexuality as a disruptive force, often kneeling to seek respite from sinful thoughts.  As the atmosphere grows more forlorn, the restrictive religious notions places blames on Thomasin.

Despite the unsettling tone and brooding sense of mystery, “The Witch” never reaches the benchmark standards set by Haneke or Bergman, but it is unnecessary to expect that kind of profound thematic exploration from a first time director. The script deals with two significant moral trajectory: the hardships William faces and subjects his family; and Thomasin’s desire to outgrow from the stifling atmosphere. William’s uncontrollable sense of pride, misfortunes, comeuppance and eventually the fall weren’t as crafty or compelling as one would expect. Ineson, with his deep voice lends enough gravitas to William, but the characters’ fall from grace had neither the nuance nor the intrigue. Thomasin’s ostracized feelings were portrayed better and amply explore the teen’s increasing sense of defiance, using the strictly religious and openly supernatural lenses. The beliefs entrenched in her mind from birth considers Thomasin’s emerging femininity as a cause of divine punishment. The implosions of the family dynamics are indirectly caused by supernatural interference, but what’s fascinating is the way Thomasin’s suffering becomes a representative of the era’s beliefs (“Wouldst thou like to live deliciously?” asks Black Philip to Thomasin, a question that is truly tempting). The easier nature to blame everything on women or the manner with which community relates feminine power to darkest power possesses enough relevance not only to the Salem Witch-hunt era, but also the present. 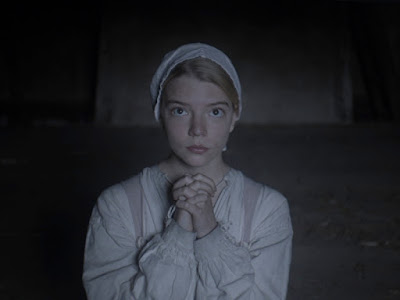 So, Eggers’ use of typical folklore story to introduce newer perspective about witchcraft is more compelling. But, still does that trite imagery of coven necessary? I felt that ending was uncalled-for. As the closing card says lot of dialogues are derived from the era’s journals and diaries, and so the presence of thee, thou, shalt may irk some younger viewers. The unsettling ambiance reminded me of Tarkovsky’s “Mirror” and Bergman’s “Hour of the Wolf” and Von Trier’s “Antichrist”, whereas the symmetrical framing and foreboding, shrieking score brought to mind the ingenious Kubrick (DoP by Jarin Blaschke, who has worked with Eggers from his short film days). Eggers permeation of visual horror is commendable. The unflinching formal structure of the shots dares us to imagine the wickedness rather than blatantly show it. Eggers casting of Taylor-Joy and Scrimshaw in the roles of Thomasin and Caleb is perfect, and it is their commitment that doesn’t turn the dreadful atmosphere silly (especially the exorcism didn’t come off contrived). The face of gloom-tinged Taylor-Joy possesses us long before her own possession.

“The Witch: A New-England Folktale" (90 minutes) considerably reworks a tired horror trope by employing an enrapturing atmosphere. It definitely lags at times, but its pensive symbols and artfully designed terror stand out.