Right Now, Wrong Then [2015] – A Whimsical Tale about Life’s Complexities 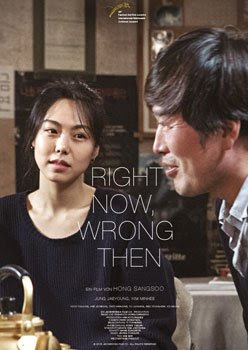 When we think about the renaissance phase of Korean film industry the names Park Chan-wook, Bong Joon-ho, Kim Ki-duk, Lee Chang-dong immediately comes to our mind. Their visual language depicts stylistic, bloody revenge sagas, allegorizes sociopolitical struggles, presents an inexpressive character with increasing dosages of on-screen brutality and profoundly observes human alienation. Their auteurist status is thoroughly embraced by cinephiles all over the world. But, even many of the Korean movie buffs aren’t charmed by instantly unlovable but insightful works of autueur Hong Sang-soo. Why’s that? May be his movies don’t have a dramatically well-defined emotional discourse; it’s more about wry exchanges, intuitive behavior and chance. And, Hong’s movies pretty much has the same setting – tourist place, café, bar and a cold climate. The characters that occupy this setting often drink, go outside for a smoke, talk, embarrass themselves and then drift apart. This limited world and characters of Hong have made critics to call him as ‘Woody Allen of South Korea’, which is true in a way. But, I feel that Hong’s presentation of the passage of time is more beautiful than Allen’s and the conversation between men and women in Hong’s works are more raw and candid.

Although Hong Sang-Soo are homogeneous in its abstract demonstration, his films aren’t like xerox copies. He has mastered the art of variation and very good at calibrating little permutations that somehow feels idiosyncratic and makes the viewers concentrate on specific, emotionally palpable moments. Hong’s recent film “Right Now, Wrong Then” (2015) retains all his favorite character, narrative trademark elements: main characters hailing from the art world; their word exchanges unable to address various specifics or complexities of life; and there’s stilted zooms, very long takes and subtle changes in camera angles, offering a wholly different meanings. The film could be described as romantic comedy of manners. I know that the word ‘rom com’ would instantly make us think about a cheesy tale of so-called true love, scaling the mountain of obstacles. But, “Right Now, Wrong Then” doesn’t move through romantic mode and the women aren’t glamorous mannequins. Its deepening conversations are all about little delights and small betrayals. 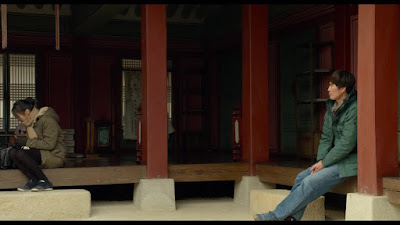 The narrative is relatively simple. A renowned art-house film-maker Ham Cheon-soo (Jung Jae-young) has come to screen his latest work in the wintry town of Suwon. Due to some discrepancies on the part of organizers, he has arrived a day before. While killing time in a famous local temple, the director meets a young painter and former model Yoon Hee-jeong (Kim Min-hee). She haven’t seen any of his films, but heard his name being immensely praised by her acquaintances. Ham finds her to be very beautiful and just can’t resist from hanging out with her. He ends up spending the day with her awkwardly expressing himself in the small studio, coffee shop, sushi bar, and in a party. Each exchange of compliments or some innocuous detail blooms or disrupts Hee-jeong’s affection for Ham. Midway through the movie, Ham’s work in Suwon finishes and returns to Seoul. Now the same scenario starts over from first, but there’s lot of subtle differences. For example, the camera placement, absence of a voice over narration and the conversations are more diverting, owing to the change in Ham’s character nature.

The tone of conversations, visual compositions and understated character insights in “Right Now, Wrong Then” reminded me more of Eric Rohmer or the late works of Abbas Kiarostami. On the outset, the scenario could pretty much be described as ‘Before Sunrise meets Kieslowski’s Blind Chance meets Run Lola Run’. It wouldn’t be totally wrong description, but may be a slightly ridiculous one. While those aforementioned had affiliations to the themes of romance, politics and post-modernism, “Right Now, Wrong Then” is simply about the troubled inner life of an artist. There is hint of romance here, but one that’s filled with awkwardness, pathos and humor rather than the usual cinematic romance mode. The camera movements and difference in framing between the two scenarios makes it wholly a story of visuals, although how the viewer reflect it is not dependent on the form, but on one’s own perception. Aesthetically, through hiccuping zooms and inclusion of partitions or minute shifts in frame balances, director Hong changes our perception, although the flow of communication remains unchanged. Miss Hee-jeong chooses orange color in one for her painting, and green in the other; there is a mention of jujube Tea in one and absent in other. Such small details may have played role in one characters’ judgment of the other.

So, what do the two versions mean? Is it hopless vs hopeful or reality vs fulfilment of wish? May be director Hong wasn’t going for this versus that. The narrative is more or less a cognitive exercise. For example, after the opening titles the 1st scenario is titled as ‘Right Then, Wrong Now’. It is a playful jumbling and one that might seem a trivial matter. But, that is what Hong’s narrative tone is all about. It hints for an atmosphere saying life’s trivial differences are anything but trivial. Much of the pleasure in watching the two scenarios is spotting out the countless trifling deviations that acutely change the paths of interactions. After Ham and Hee-jeong meet for the first time, in both instances, Ham offers to carry her plastic bag and in both times she catches him peaking at the bag’s contents. But, only in the second time, she asks ‘why are you looking inside’, indicating an unexpected heat in their connection. Director Hong is playfully stating at how ‘what feels at right in one scenario, feels wrong in elsewhere’. The film is really riddled with such subtle individual perception of ‘right’ and ‘wrong’.  Then there are broader differences in the narrative like how Ham tells all the ‘positive’ things to Hee-jeong, especially when she expresses doubts about her art. In fact, the positive words gets him to trouble later on, as during dinner at Hee-jeong’s friends’ house, the friend indicates how the ‘positive’ words he told is something he repeatedly uses in all his interviews.  The second time, Ham is more honest and doesn’t care about being nice to the beautiful girl. He harshly criticizes her art as not being bold, which in an intriguing way actually increases Hee-jeong’s interests on him. And these both approaches of Ham tell us a lot about human foibles with an elegant comic touch. 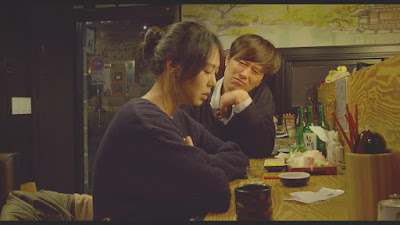 “Right Now, Wrong Then” isn’t about answering ‘did he get the girl or not?’ It rather comes across as a tale of two characters, unhappy with their circle and sort of searching for an escape. And the hope of finding a connection is diffused in their encounter, which either highlights the sameness or contradictory nature of their characters. But, we know that this attempt to seek quick, desperate connection will extinguish at one point. It is a fixed, natural thing, where disparities finally win over. So, the beauty of Hong’s writing is about providing intricate emotional insights and not about finding ways to get a beautiful, troubled girl to bed. The way the sharing of information at certain point of time in the conversation alters one’s perception of us. The gentle tone of voice and showering of compliments don’t make one individual to be our object of affection. It’s a position that might seem tad pessimistic, but Hong does instill hope, especially in the second scenario. Despite all the little conflicts and disappointment in the limited space of time, they find some common ground or show little respect to each other. Director Hong’s movies are always carried on by good actors and trust them enough to bring out the characters’ intricacies. Kim and Jung playing the main characters impeccably embody little shifts in body language and concentrates on smaller expressions. Kim and Jung are great at not only acting like listening to each other, but also in showing gestures of failing to listen to each other.

“Right Now, Wrong Then” (120 minutes) isn’t definitely going to enamor those who had never liked the works of Hong Sang-soo. Those who are getting initiated into Hong’s work with this film would feel that its run time is protracted and scenarios little dull. Nevertheless, it is yet another thematically awe-inspiring work of an auteur, interested in observing the complexities of life and chance encounters.

at April 08, 2016
Email ThisBlogThis!Share to TwitterShare to FacebookShare to Pinterest
Labels: Korean Cinema