In America [2002] – A Soul-Penetrating Tale of Grieving Angels 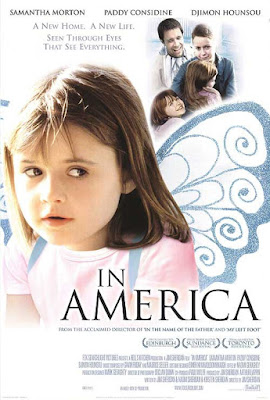 Movies that end with a grieving loss of a family member would finish on a hopeful note expressing that at least the other members of family have come together, and so eventually the grief might wash away. But, we know that grief isn’t a sand castle, stacked on the shore, waiting to be deluged by a huge wave. It is much more complex than that. It could pass on like an infection, maiming & turning us into the living dead. But, at the same time if you manage to rise out of grief, it will transform you into a new, humble person. Irish film-maker Jim Sheridan's “In America” (2002) deals with the grief of a family, who had just lost their youngest family member and is unable to express or talk about the intense sorrow, spreading throughout their heart. How do they start anew among this hovering soul-sickness form the core of this emotionally resonant tear-jerker.

“In America” begins at a point, where most movies dealing with grief ends. The Irish family of four: father Johnny (Paddy Considine), mother Sarah (Samantha Morton), two daughters Christy (Sarah Bolger) and Ariel (Emma Bolger) arrive into New York on tourist visa to have a fresh start. Our narrator is the matured, contemplative 10 year old girl Christy, who believes her recently deceased little brother Frankie’s words that ‘she can make just three magical wishes in life’. Christy, the reserved one, has a camcorder and records the lives around her, while Ariel is a boisterous 7 year old, who believes in the magic world to view everyone as friends. When crossing the border from Canada, the family’s bedraggled car is stopped by the immigrant officers. While going through the papers, they ask about the 5th family member. Suddenly, grief pervades the atmosphere as the subject of Frankie comes up. Right at that time, Christy makes her first magical wish to pass through the border without facing any tribulations from the officials. The wish fulfillment happens and the family traverses through the green-hued tunnel to emerge into the bustling neon-lit streets of New York City. 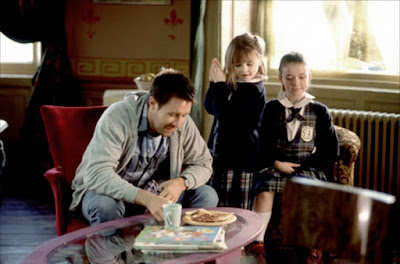 The children stick their head out of the car, basking in the aura of artificial lights. Of course, a beaten-down adult may see this setting as hokey, but this scene plays out from the perspective of children, and so it retains the magical feeling. The family’s grief and downbeat prospects seems to be washed off in that ‘cruising-through-the-streets’ moment, but as I said the averted grief always waits in the dark, getting ready to pounce on us at the right time. Despite witnessing the glamorous side of Manhattan, the reality takes Johnny and his family to a run-down apartment in New York’s famous ‘Hell’s Kitchen’. They have junkies and other societal outcasts as neighbors. Johnny, a stage actor, goes to various auditions. Sarah aims to be a teacher, but only gets the waitress job at an ice-cream parlor named ‘Heaven’. Along with repressed grief, poverty and searing summer heat troubles the family. But, thanks to the enlightening joyous faces & keen eyes of the children, Sarah and Johnny do their best to find their footing. The little girls also make friends with a towering, afflicted artist Mateo (Djimon Hounsou). Gradually, with the help of these gentle souls, the parents learn to say goodbye to the smothering grief and find happiness in the present. 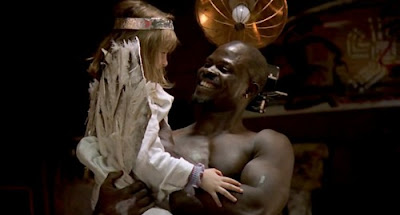 “In America” is definitely sentimental. Yes, it elicits emotions out of us, but it didn’t feel manipulative. Barring few hokey moments, the tears we shed for the characters and their predicament are well-earned. The sentimental allusions also don’t stop writer/director Jim Sheridan to profoundly explore the lacerating impact of repressed grief. Sheridan was accused of tidying up the realities of Hell’s Kitchen, and for construing a script that’s impractical. “In America” is a timeless fable about coming to terms with loss and grief. Since, director Sheridan opts to unfurl the story from the children’ perspective, he chooses a poetic-realist tone rather than showcasing the stark realism. The children running around the apartment building, riddled with junkers & hustlers, without facing any sense of danger could be taken as a testament to this poetic-realist tone, rather than a fatal flaw in the script. The reference to the E.T. character, the snowball fights, and the ailment of Mateo does turn to be the narrative’s little sappy moments, but Sheridan at each turn, keeps on revealing great depths about the characters that we can overlook those inherent flaws.

The story was semi-autobiographical, based on Sheridan and his family’s own experiences in the 1980’s US, when he worked as a stage director, before moving back to Ireland to make his critically acclaimed debut feature “My Left Foot: The Story of Christy Brown” (1989). Sheridan is said to have written the first draft of “In America” and sent it to his two daughters for advice. They brought in the perspective of their 80’s childhood. It lead to create distinct, polyphonic view points for the characters and the daughter Naomi & Kristen Sheridan ended up sharing the writing credits alongside father Jim. If on the paper, the plot seems to threaten to go overboard with maudlin tones, director Sheridan does his best to keep the humane, oft-kilter tone. The heartwarming and heartbreaking confrontations between the characters are the significant parts of the narrative, which is well-written and more importantly, it was flawlessly staged. In one such sequence, Johnny has an argument with Sarah about her trying to forget their dead son Frankie and his inability to feel for his living kids. To which Sarah asks “If you can’t touch somebody you created, how can you create somebody that’ll touch anybody”. Those unadulterated words perfectly relate Johnny’s grief with his inability to be the good actor. Later, Johnny puts on an actors’ face and confronts the dying neighbor Mateo. Once again, the ensuing conversation reveals a face of the character, which we aren’t able to perceive previously. The script moves between loosely built episodes, but those things are gorgeously performed and staged to lose our interest. 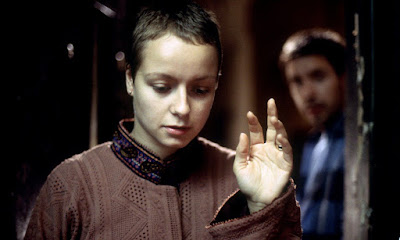 Jim Sheridan recurrently zeroes-in on the contradictory decisions, the characters make, when they are at end of their tether. Johnny’s decision to risk everything for a $30 ET doll to gain respect among his kids and Sarah’s hazardous decision to have the baby for protecting the children are the examples of those conflicting positions. It might seem ridiculous in some other film, but here it wonderfully gels with the narrative’s whimsicality. The observations by the children are alternately funny and sad. The scene where Ariel tells about her loneliness to the parents is so heartbreaking and very relatable. One of the movie’s well-directed sequences occurs when Johnny and Sarah conceive another child, while below their apartment the secluded Mateo slices his hand and dribbles blood onto the canvas. The entire scene is capped with thunderstorm, and the cross-cuts between lovemaking and Mateo’s rage indicates how one man’s maddening desire to life is somehow connected to conceiving and survival of a newly born child (the cross-cuts occurs at a later stage too). 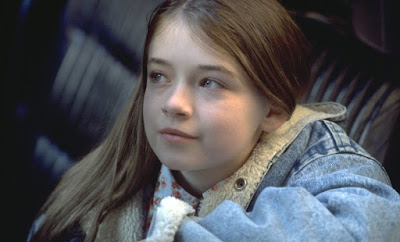 The performances are uniformly excellent. If the Bolger sisters (playing Christy & Ariel) are miracle of the movie, Samantha Morton & Considine serve as emotional anchor. Sarah & Emma give one of the best child performances on-screen. Their simple observations are radiant enough. They depict the soulfulness of kids without ever putting in front the cuteness factor. Paddy Considine infuses the everyman quality to his character and his gamut of emotions in the final scene would be strongly felt by all, who fought hard to overcome a loss. Morton’s expressive eyes and lyrical smiles don’t demand for dialogues to showcase the characters’ inner conflicts. She is one of the rare actors, who could sell every scene she acts and in this film, even her fragility has elegance. Djimon Hounsou strikes the right notes as Mateo, a character which could easily be turned into a stereotype (the disappointing career trajectory of Hounsou, despite starring in movies like “Amistad”, “Gladiator” and “Blood Diamond” also tells a lot about Hollywood’s casting choices).

"In America” (105 minutes) is an uplifting film about a beaten down family’s struggle to overcome obstacles like grief & cynicism. It puts a touchingly human face to the wise words of ‘how one should not dwell on the past but look towards the future’. The odd crowd-pleasing sentimentality may irk those expecting subtlety, but the performances kept on pulling my heartstrings till the end.