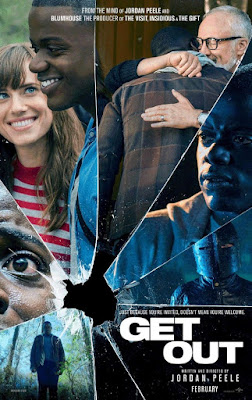 The great African-American author and social critic James Baldwin in one of his impassioned speech about White America blasted off Robert F. Kennedy’s statement on race relations. Mr. Kennedy, lovingly called as the liberal icon, said ‘it was conceivable that in forty years, America might have a Negro President’ (a prophecy that of course became true). Mr. Baldwin refuted Kennedy by saying, ‘That sounded like a very emancipated statement, I suppose to white people……. From the point of view of the man in the Harlem barbershop, Bobby Kennedy only got here yesterday. And now he’s already on his way to the presidency. We’ve been here four hundred years, and now he tells us that maybe in forty years “if you’re good, we may let you become President.”’ The words of RFK are just one of the many examples of racism, brewed by the self-conscious, ‘well-meaning’ White American liberals. It’s a very nice method to showcase their white supremacy and myopic view-point about racism. The crux of comedian-turned-director Jordan Peele’s terrific horror film Get Out (2017) humorously indicts this courteous way of championing white privilege, widening the inequities more than ever.

Get Out might seem to have furious, overt political tone and one may wonder how such a tone could find its place in a horror genre. Despite the obvious social commentary, director Peele never loses sight of the foremost agenda here: to scare and unsettle the viewers. For example, the film opens with a young African-American uncomfortably walking through the suburbs, attacked and abducted by an unknown assailant, which sort of echoes the shooting of 17 year old Travyon Martin. Nevertheless, Peele perfectly creates tension through dark atmosphere and sudden movements, fulfilling our horror expectations. The opening asserts that it’s a genre film, whose scares aren’t just spread out on the surface. The prologue is followed by the setting, reminding us of Stanley Kramer’s Guess Who’s Coming to Dinner (1967) – a story about race which itself became the view of liberal hypocrites. Chris (Daniel Kaluuya), the talented photographer (covers the life in black, urban neighborhood) is packing his clothes for a weekend trip with girlfriend Rose Armitage (Allison Williams) to meet her rich parents. Chris anxiously asks, “Do they know I’m black?” A question she finds it funny and outdated. She further states her dad would have voted for Obama for the third time if a chance came up. 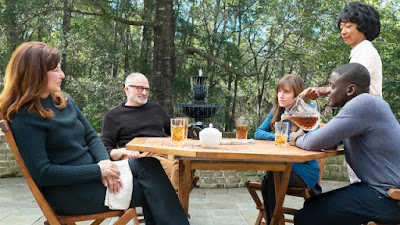 However, Chris couldn’t shake off his anxiety, since he doesn’t know what to expect from rich white liberal parents of his beloved girlfriend. Chris’ dog is left in the care of Rod (LilRel Howery), a TSA agent, who jokingly comments on his visit. The journey to Armitage estate is marked by deer-vehicle collision and a tense encounter with a police officer. Arriving at the estate, Chris meets Rose’ seemingly well-mannered parents – Dean and Missy (Bradley Whitford and Catherine Keener). Dean takes Chris for a tour of the house and convey tidbits of family history. He confides that his father lost to Jesse Owens (a renowned African-American athlete) during qualification to 1936 Olympics and as expected he makes the ‘I would’ve voted for Obama’ comment. There’s no stinging indictments; only good-old racial awkwardness. What Chris finds odd in the estate are the presence of black maid Georgina (Betty Gabriel) and gardener Walter (Marcus Henderson). Despite their smiling exterior posture, Chris feels there’s something sinister about them. Dean says how stupid it might seem – rich whites, black servants. ‘We hired Georgina and Walter to help care for my parents. When they died, I couldn't bear to let them go’, states Dean and his insistence on the word ‘them’ could only be understood later.

The only moment Chris feels uncomfortable with Rose’ parents are when her mom questions him about the smoking habit. Missy talks of hypnotism which has successfully helped her husband and few others to cast aside the bad habit. Rose’ parents also announce that the regular family party is to be hosted in this particular weekend. After couple of uncomfortable encounters in the night, Chris wakes up next day and meets procession of weird elderly male and female guests, who treats him as an exotic object (one woman questions Rose ‘is it true?’ referring to the usual black-male sexual stereotype). Another guy gleefully approves Chris’ presence by remarking ‘Black is in fashion’. A visually-impaired art-dealer (Stephen Root) also takes special interest in Chris and his photography. Gradually, the atmosphere exudes eerie, conspiratorial vibe we have witnessed in movies like ‘Rosemary’s Baby’, ‘The Wickerman’, ‘The Stepford Wives’, etc. We wait for the insipid smiles to vanish and the ominous notions to float to the surface. 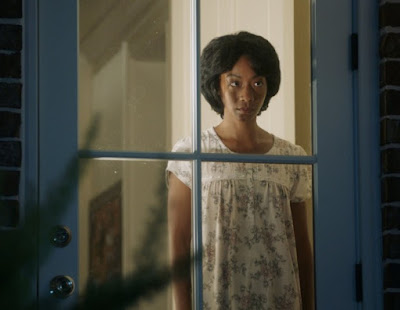 There’s couple of stand-out elements in Mr. Peele’s writing and direction: finding the perfect balance between comic, satirical moments and unsettling horror; distilling racial anxiety as the foremost horror aspect (till the end) than relying on simplified villains (the antagonists are both ruthless and absurd). Jordan Peele explores the strain of racism not often seen in films. The racism Chris encounters is tinged with flattery. From passing comments on his ‘genetic makeup’ to assumed sexual prowess, the crowd sees him with a hint of unidentified jealousy, intended to say that Chris is somehow ‘different’ rather than their equal. These earnest-looking, awkward exchanges speak a lot about the subtle bigotry of the privileged, pseudo-intellectual people, who often proclaim they aren’t racists by citing how much they admire celebrities or iconic personalities of ‘different’ color. However, as I mentioned before, Get Out isn’t just about the damning social commentary. It’s a top-class amalgamation of horror tropes for viewers seeking chilling movie experience. Jordan Peele effectively uses old horror ideas to carve out new territories.

While most of the conspiratorial horror films run out of fuel in its third act after the big reveal, Get Out’s final act provides both visceral thrills as well as discloses new depths to the familiar themes. ‘The sunken place’ doubles up as a genre element and also a commentary on the marginalized, whose vociferous claims never reach the ears of the privileged. Mr. Peele expresses that his visualization of the ‘sunken place’ details the predicament of black people, trapped forever in the lower rungs of societal ladder. The script is full of brilliantly fleshed-out minor details, which makes perfect sense in the second-time viewing. The technology repeatedly saves Chris from doom. Apart from his smartphone exchange with friend Rod, Chris sees new (weird) things when he gazes through his camera.  The ‘IMDb trivia’ page for the film lists out a lot of interesting details, especially the ones referring to slavery, and the hidden meaning behind stuffed-fur lion, bucks, silver spoon, etc. The scene involving Rose’ argument with the police officer offers a different meaning in the re-watch.

From being quiet, passive man to aggressively fighting against white authority, Chris’ has a well-rounded character arc, especially after considering American horror film’s cardinal rule: ‘the black guy dies first’. It is so cathartic to witness the bloody climax portions and an ending which isn’t stark and cynical. When the police car pulls up in the final shot (in what’s to be good directorial touch we see Chris’ automatically rising his hands up although he is the victim), we think of the only possible result that might come out of it. Yet, Peele surprises us, giving a closure that’s not faultless, but well-deserving (if white Hollywood heroes go scot-free after murdering ‘savage’ native tribes or alleged terrorists, why can’t a persecuted African-American hero enjoy his own rightful benefits).

Get Out (105 minutes) is one of the rare meaningful horror movies, which efficiently blends the sense of intense terror with sharp social criticism. Jordan Peele has made a remarkable directorial debut as his scares and morbid laughs works on multiple levels.

at May 12, 2017
Email ThisBlogThis!Share to TwitterShare to FacebookShare to Pinterest
Labels: 2017 Movies, Horror