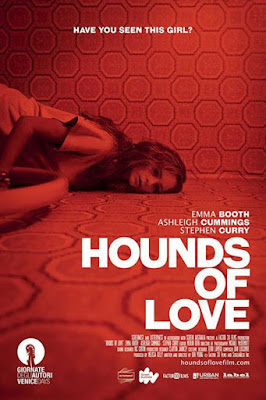 In its intention to explore the mind of a serial killer and the societal atmosphere he lives in, one that prepares him to commit gruesome crimes, movies mistakenly tend to lessen the impact of the crime, or even worse, it glamorizes the violence. Australian film-maker Ben Young’s feature-film debut Hounds of Love (2016) doesn’t make those grave errors. It’s more about the psychology of people committing such brutal acts than being a visceral presentation of brutality. In Hounds of Love, Ben Young focuses on a quite simple-looking suburban couple; on their symbiotic relationship. The shock comes from what these couples do. The ‘how’ is only suggested (left to our imagination), yet the uncompromising presentation of the two characters and their terrifying performances are disturbing enough, providing none of the catharsis through bloody violence.

Ben Young has cited that his mom, who writes crime fiction, as the source of inspiration for this story. He borrowed her book on female serial killers and found within the stories of couples killing together. The script and the character psychology are based on different 'couple' serial killers. Director Young also decided to set the film in 1980s to subvert the presence of contemporary technological devices and these suburbs from the 80s has a bland, wasteland looks to it. Hounds of Love opens in Western Perth in the year 1987 (in the 1980s Perth couples David and Catherine Birnie killed four young women between age 15 and 30). The opening sequence announces Young’s keen directorial abilities. In the extreme slow-motion opening shot, there’s closeups of school girls playing ‘Netball’. The perverse gaze of the voyeuristic camera is centered on the girls’ torsos and we come to realization that the vile gaze is that of a man sitting inside a nondescript car, waiting for a target. The seemingly affable couple successfully lures one girl, walking home in the punishing summer heat, into their car. The teen is taken to the couples’ bland suburban dwelling, tied to a bed, raped, tortured, and after eating the breakfast next day, the man kills the girl and buries the corpse. 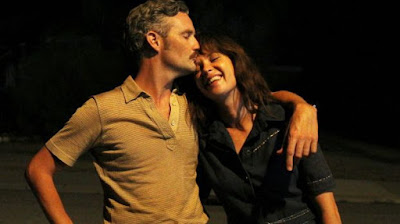 The predatory eyes that chose the ‘target’ and one which seemed gentle enough for the teenager to get inside the car belongs to John (Stephen Curry) and Evelyn (Emma Booth). Director Young doesn’t give away graphic details of the killing. He simply shows boarded-up window, closed door, and bruised hands tied to a chain to grimly suggest the fate of the girl. The visuals simply focus on how these couples go through the motions, before and after committing the cruel act. It’s like a routine thing, devoid of emotions; similar to some people switching on TV after long day of work, and impassively looking at the images floating on the screen. Few streets away from John and Evelyn live the rebellious 17 year old girl Vicki (Ashleigh Cummings). She has come to spend the weekend with the mother (Susie Porter), whom she hates for leaving her and the father. When mother grounds Vicki for the night, she sneaks out her room’s window. En-route to a party, Vicki encounters the dangerous couples, who promises pot if she comes to their house for a fleeting minute (as a couple they seem more trustworthy). Drugged and chained to a bed, Vicki later witnesses and desperately tries to exploit the dynamic dysfunctional relationship between John and Evelyn in order to escape. 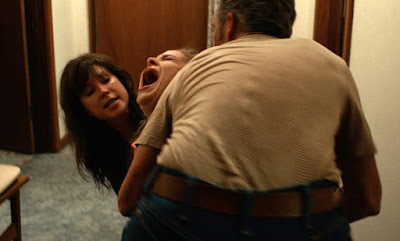 As I mentioned earlier, much of the unforgivable crimes take place off-screen. Writer/director Young is interested in exploring the manipulator-manipulated status between John and Evie. John is a walking time-bomb, while Evie is a very vulnerable woman. She is profoundly manipulated by John so as to succumb to his loathsome desires. He also gradually erases her identities (particularly the identity of mother – Evie's two children are detained, may be due to John’s pedophilia) to make her feel that life isn’t possible without him. All she experiences is the twisted sense of love, which John showers upon her, by allowing participation in his deviant sexual acts. For Evelyn, the fact that John dismembers the girls after sex proves she is the only love in his life (a twisted way of reasoning indeed). The central conflict arises when John finds Vicki attractive to try and solely violate her. Naturally, Evelyn finds this unbearable. The way Young explores this abusive relationship makes strong thematic statements on the dark side of love, domestic violence, and ingrained misogyny. But most importantly, despite spending quite a lot of time on Evelyn’s perspective, Young doesn’t try to minimize her status of an accomplice; or bestows her character a sudden change of mind. Evelyn remains truly remains disturbing to the end, because John is driven by a very sick mindset, while Evelyn has done it for her idea of ‘love’. Vicki’s character is written as much more than rebellious-teen-turned-victim. Both her determination to outsmart her captors and the sense of utter hopelessness is inquired equally. The precarious relationship between Vicki and her mother isn’t fully developed. But I liked how the mother character strongly comes back into the narrative (towards the end), who unlike others believes that her daughter could be found. Moreover, Vicki’s freedom eventually rests on her mother’s belief.

The faded-out color palette and the dingy neighborhood with sinister goings behind white picket fence and closed doors reflect Lynchian imagery. The co-existence of depravity and the mundane life reminds us of the opening sequence in Lynch’s Blue Velvet. Nevertheless, Ben Young’s visual sharpness doesn’t boast heightened reality or surreality of Lynch. The visuals stresses on the dichotomy: the presence of monstrosity within ordinary. The setting also brings to mind the other two excellent Australian crime films (both based on true events) – David Michod’s Animal Kingdom (2010) and Justin Kurzel’s Snowtown (2011). There’s something Kubrickian in the way Young uses music to not only place us in the era, but also exhibit the jarring mindset of the dysfunctional couples (similar to the use of Singin’ in the Rain song in ‘A Clockwork Orange’). Perhaps, the best thing about Young’s direction is making us fully grasp John and Evie’s mental sickness without ever unfurling the details of their actions (the scene when John kicks at the dog is truly horrific although the frame only captures his face). Emma Booth and Stephen Curry are brilliant as the central pair. Curry, who is a well-praised comedy actor, is cast against type. He gracefully wears the mask of loving husband, while also tearing it up to some pretty brutal things. Booth magnificently showcases her inner turmoil, convincingly moving between the roles of victim and victimizer.  Cummings is courageous to accept the role of emotionally and physically battered Vicki and she wholly traumatizes us.

Hounds of Love (108 minutes) subvert the usual serial-killer theme trappings to offer a genuinely chilling film experience. Deubutant film-maker Ben Young’s remarkable film-form and the riveting performances perfectly achieve the task of disturbing the hell out of us.

at May 15, 2017
Email ThisBlogThis!Share to TwitterShare to FacebookShare to Pinterest
Labels: Films from 'Down Under', Hard-Hitting Movies