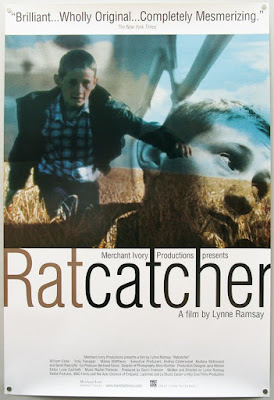 Death, guilt, and despair plague the characters of Scottish film-maker Lynne Ramsay. In the three feature films she has made and in the couple of shorts, dialogues are sparsely used. Her visual language is lyrical & bold, and through sharp sound & production design, she fabricates a hellish world. The directorial touches remind us of Terrence Malik, Bill Douglas, and Terrence Davies, although the way Ramsay efficiently uses the fragmented narrative diffuses a feeling of watching an original work. Ramsay’s movies will be disliked by those expecting readily apparent images, since her narrative tracks down the profound, unresolvable feelings of the central character. While the director’s debut feature Ratcatcher (1999) might have written from personal, childhood experiences, her next two features were based on novels (“Morvern Callar” & “We Need to Talk about Kevin”). In a Lynne Ramsay movie, every bad thing that could happen to the protagonist would have happened before or at the start of the film. The script from then on would explore the aftermath of this ‘bad incident’. Grief, guilt, and pointlessness of existence would swell up within the central character, while a sense of optimism and lyrical beauty would also co-exist.

“Ratcatcher” begins with a moment of poetic beauty. A young 12 year old boy from Glasgow wraps & spins his face on the drapes at his house. The sun shines upon the white drapes and since the shot moves in slow-motion, we get the feeling of watching an elegant balletic dance. But, it’s suddenly interrupted as the mother pats on the boy’s head to stop playing with her drapes. The boy moves out of the frame and the hanging fabric slowly unfurls to its static position. Of course, at that point we don’t know the foreboding nature of those visuals. A boy named Ryan Quinn watches his friend James (William Eadie) playing near the foul-smelling canal at the back of their apartment complex. James, on the brink of adulthood, plays a game that ends up bad. Few hours later, Quinn is found dead. He has drowned in that canal. James is responsible for the accidental drowning. No one has seen this accident, but the feelings of guilt latches onto his already fragile self.  James is a lanky boy who reminds us of David Bradley’s Billy in “Kes” (1969). He lives in a dilapidated council house, situated in a very tough and filthy neighborhood. His mother (Mandy Matthews) is lovely woman, although his step-father (Tommy Flanagan) becomes too abusive when he is drunk (which he is every evening). James has a distanced relationship with his two step-sisters (Michelle Stewart and Lynne Ramsay Jr.). 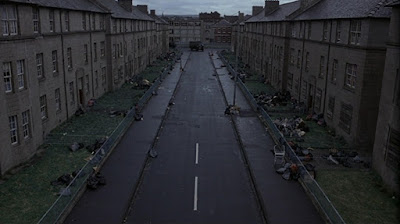 The story is set in the 1970’s and on a particular time period when Glasgow’s bin men went on an extended strike. The film gives a very realistic look of how the city’s project housing facilities looked and smelled at that time. In many sequences, we cringe by looking at the rats that freely move through the gathered trash, mounted in front of the apartments. Eventually, the government brought in soldiers to remove at least 39,000 tons of trash, in & around Glasgow after the imminent threat of serious health hazards. After showing the barely hanging familial threads, we get to see James’ small circle of acquaintances, who are all mostly heartless bullies. James shows concern for a teenage girl Margaret (Leanne Mullen) and a mentally challenged boy named Kenny. With Margaret he develops a kind of graceful, tentative relationship. However, apart from the feelings of guilt involving Ryan Quinn, he also feels guilty about his powerlessness to help Margaret from the local bullies. In the course of narrative, Margaret is repeatedly sexually abused by the tough teenage boys. James does possess the dream of breaking away from this casually cruel reality. He lives that dream for few hours when he escapes on a public bus to a new housing development under construction, which is situated near a large field of golden grass. James joyously jumps, runs, and rolls through the grass. He expects that the council men would allocate those houses for their family. But, can he totally heal his self that’s drowning under guilt and move away from the plagued atmosphere? 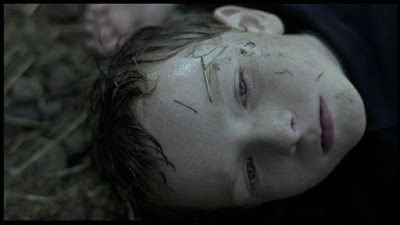 Ramsey’s cinematographer Alwin Kuchler and her production designer Jane Morton have worked in the director’s short films, whom she met when she was a film student. The three of them had precisely imbued a tone of poetic realism. While the grainy quality and muted grey palette conveys the hard social realism, there are arresting, truly magical moments. The frames are watchful of the movements but they are non-judgmental so as to include humanity. Since the film is a meditation on a community seen through the eyes of a 12 year old boy, the fluid, creative visual works fends off the inherent depressive tone in the script. May be some of the images are diffused with obvious artiness. But the inexplicable emotions she raises within us through the artistically pure frames are commendable. For example, we see the two kids (Jamie and his younger sister) lying down on the couch, embracing each other. The image unconsciously works on our emotions, gives a sense of happiness, but we can’t seem to pin-point the reasons. In another scene, where Jamie shares the space with troubled teen Margaret, we see them naked in the bathtub, scrubbing each other’s hair with soap. However, the sequence is staged in a way that’s devoid of titillation. We could rather feel the tenderness existing between these two drowning souls. The recurrent visual motif of drowning plus the images of black trash bags and fetid canal symbolizes the inner pressures confronted by Jamie.

Perhaps, the most powerful aspect of the film is its portrayal of poverty. Director Ramsay views childhood as a rich experience, but persistently notes how the childhood is disfigured by the rampant impoverishment. The teenagers act like monsters, while children acts like adults. In one of the film’s very distressing scene, we see army men clearing away the rubbish as gang of children kill the rats inside the trash bags and wave the dead rats at each other. In another, the teens gang up on the dim-witted kid Kenny to make him kill his pet white mouse. The powerful observation of this behavior makes a comment on how the blighted world these children live in impacts their nature. If the film feels little disjointed or episodic, may be it’s because of Ramsay’s less success in depicting the adults behind the children of this society. The behavior of adults, for the most part, offsets the sense of beauty and tenderness felt in the frames. The narrative’s cruelties are escalated in an inorganic manner in the final potions (like the sexual abuse, slashing, and domestic tension) with a sole aim to push to the seemingly ambiguous ending. While we continuously experience the profound horrors faced by Jamie, the final act slowly drifts to the predictable territory. The performances are uniformly excellent, especially that of the two youngsters – Eadie and Leanne Mullen.

Ratcatcher (94 minutes) intensely visualizes the bleak collapse of a society. Its beauty and strength lies in the way it transcends that bleakness to contemplate on the possibility of hope within the souls, dwelling in such an impoverished atmosphere. The imagery boasts a beguiling lyricism which may not impress viewers expecting verbal storytelling approach.