Goldstone [2016] – A Procedural with Idealistic Intentions 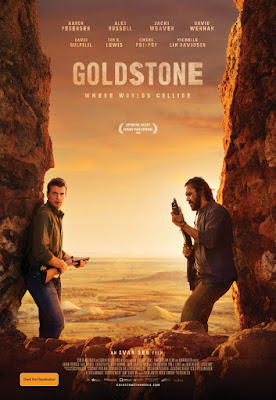 Australian writer/director Ivan Sen’s Goldstone (2016) revolves around indigenous detective Jay Swan (Aaron Pedersen), who earlier busted a drug network, putrefying the aboriginal community, in the mystery/thriller Mystery Road (2013). Jay Swan is a character brimming with existential angst. He is not trusted by the white law officials and always seen with a little suspicion by impoverished Aborigines. Like many men in the indigenous community, Jay’s father too succumbed to alcoholism and lost his life. In the sequel Goldstone, the void has only deepened as the protagonist detective stays in inebriated state after the loss of his teenage daughter. When we first see Jay he is rolling into an isolated mining outpost town (the one in the title) in his old truck and stopped by a local policeman Josh Waters (Alex Russell). Josh thinks of Jay as just another drunk wanderer of Aborigine community and places him on a lockup to dry out. He looks into the drunken guy’s bag to discover the detective medal. Josh reports this to pie-baking motherly mayor Maureen (a brilliant Jackie Weaver). Although Jay looks lost there is a purpose for his visit to this parched mining town: to track down the whereabouts of a missing, young Chinese girl who was last seen in the town’s outskirts.

Ivan Sen opens Goldstone with old pictures of multi-cultural workers and their rich white masters, taken during the 1800’s Gold rush in Southern New South Wales. At least 7000 Chinese were believed to have worked in the NSW gold fields. The old pictures speak of the socioeconomic oppression and shows how little have changed in these areas. The gallery exhibition in the opening credits ends up with the photo of young Chinese girls – may be prostitutes brought in to serve the workers. The ruthless Caucasian master of yesteryear is replaced by a mining company and a gentlemanly manager Johnny (David Wenham). Jay receives the same kind of treatment Spencer Tracy’s character received in “Bad Day at Black Rock” (1955). As a stranger in town, he is offered tea and pies, but gently warned off to not stir up the hornet’s nest. Jay, who is not so desirous to hold onto his life, knows that all the roads lead to ‘Furnace Creek’ mining company (literally and symbolically). So he starts off his investigation there by trespassing into the company’s property, and in return he faces crew of heavies, equipped with state-of-the-art assault rifles. 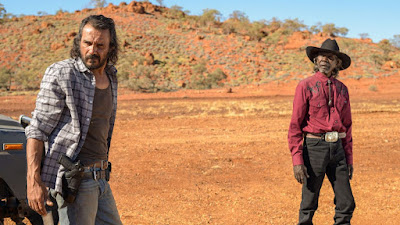 It is customary for Johnny to offer bribery to fend off opposition for his plans of development. The company has called up for an expansion, which may lead to the eviction of indigenous people. And, to expand they need the consent of ‘black fellas’. That’s no problem since the local chairman of the land council Tommy (Tommy Lewis) is on the take. The rest of the small Aborigine community is wasted on grog (rum cut with water) or on drugs. Wise, senior figures of the community like Jimmy (David Gulpill) is left on their own. The teen Aborigines are so depressed to choose suicide as the only way out. To say in few words, the Aborigines are still caught up in the whirlpool of Australia’s colonial past. A visit to this impoverished community makes Jay to learn some truth about his past. He easily pieces out the debauched connection between the powerful people, but the vital piece of the puzzle are the beautiful pan-Asian girls, who are flown in (without consent) to service the mine workers (to pay off their burgeoning debt). Young white Australian Josh is a morally grey character whose stern stance may benefit Jay’s mission. 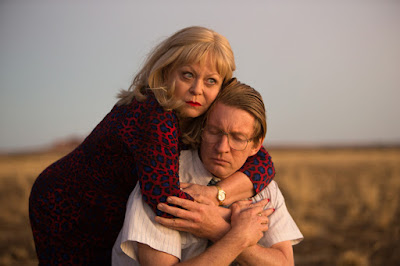 Director Ivan Sen says that he wants to pass on his socially conscious themes in an ‘artistic but digestible way’. He started off his career with neo-realist tales and documentaries (“Beneath Clouds”, “Toomelah”) and made the transformation to script gritty tale Mystery Road, which in terms of structure resembles film-noir genre. The simple set-up of the location reminds us of old westerns: a town with one policeman; a one-man pub, gang of hoods, etc. Sen continues his cutting critique on Australian society by referencing the themes like teen Aborigine suicide, chronic alcoholism, etc. Dangerous wild dogs are once again mentioned (as it was in Mystery Road) although we don’t see the creatures or its spoils. The wild dogs, I think, represent some kind of metaphysical menace confronted by Jay. The script adds more metaphorical weight when Jimmy, the spiritual guide, takes Jay through Aborigine lands (to see ancient cave paintings) to suggest about whom the land is going to evict. After considering the complaints of confusion regarding Mystery Road’s story-line (especially the ending), Sen might have chosen a pretty clear plot and characterizations. Nevertheless, the structure is wafer thin to justify the running time.

There’s nothing wrong with a robust slow-burn thriller and noirs could be engaging even when we can’t fully figure out what’s happening (eg, “Inherent Vice” or the masterpiece “The Big Sleep”). Goldstone doesn’t belong to neither of these categories. The dialogues aren’t subtle and the characters aren’t strong enough to substitute the lack of mystery. Wenham and Jackie Weaver elevate their caricatured villain characters through their wonderful performances. There are quite a few inorganic scenes to insist on the film’s themes or to deliver information. The brothel madame’s bleak advice to the young Chinese girl, and Jay’s encounter with prostitute ‘Pinky’ (operating out of a mobile brothel) are some examples of the inorganic narrative beats. These prolonged scenes and recurring motifs rather than adding weight to the structure only turns it into a tiring experience. Of course, there are few well-written scenes. My favorites are the encounter between Chinese girl (Michelle Lim Davidson) and Josh. They both strive to save themselves by trusting each other (and their acquaintance is not romanticized). Eventually, what makes Goldstone a watchable movie (if not one of the good Australian flick) is the technical prowess of director, editor, cinematographer and musical composer Ivan Sen. He shows an amazing restraint in direction, which lacks a bit in his scripts. 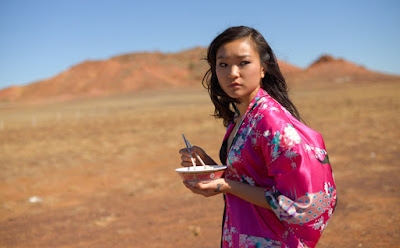 Sen’s frames find the seam of rich emotions lying beneath the placid face of Aborigines and thoughtfully exhibits what it is like to live on the fringes of a community. When Johnny promises jobs & economical improvement for the indigenous community (during the meeting to make the Aborigines sign off their lands) Sen observes the community’s children jumping on a giant inflatable slide and adults with disconnected gaze (succumbed to grog). The way Sen relates to & visualizes the indigenous experience (their land rights issues) brings excellent vibrancy to the narrative. Director Sen seems to love aerial shots and close-ups. His steady pace lends magnetic force to both these oft-repeated shots. Among all the expert visual constructions, the one indelible aspect of Sen’s film are the shoot-outs. The impressively shot action scenes in Goldstone are tauter than the ones in “Mystery Road”. The final shoot-out that unfurls in between the mazes of camper vans was brilliantly visualized. There’s ample pause and silence in his action scenes rather than imagining it as a bullet-fest. Aaron Pedersen once again delivers a brooding performance as Jay. Pedersen impeccably showcases the frustration of being part of the establishment and part of the indigenous world. His demeanor and some of his mannerisms remind us of the famous fictional gumshoe Philip Marlowe.

Goldstone (110 minutes) was an expertly filmed and performed outback noir with sharp & relevant social commentary (human trafficking, cultural destruction and corporate corruption). Although the writing is not so intriguing, the creative pursuit to expose the mistreatment of marginalized people delivers a fine impact.

Goldstone (2016) -- IMDb
at May 30, 2017
Email ThisBlogThis!Share to TwitterShare to FacebookShare to Pinterest
Labels: 2016 Movies, Films from 'Down Under'