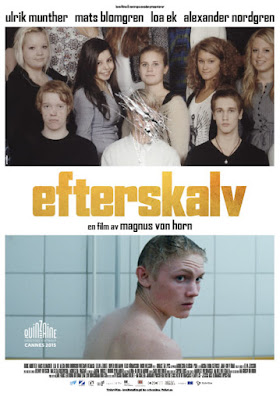 Poland-based Magnus von Horn’s Swedish directorial debut The Here After (‘Efterskalv’, 2015) is a slow-burning, calmly intense drama which deals with the themes of punishment, guilt, forgiveness and aftermath of crime. It’s natural for adolescents to feel that the whole world is conspiring against them; to embroil themselves in atmosphere of isolation. For Magnus’ young protagonist John (Ulrik Munther), it’s not just a transient feeling; it happens to be the truth. He faces vicious resentments and reactions within his small-town community for an unforgivable crime he committed few years before. The small town doesn’t provide the luxury of city that may bestow second chance for juvenile perpetrators through its cloak of anonymity.

The Here After explores an interesting, if not very familiar subject – communal apathy and group hysteria. Recently, the Swedish film (also released in 2015) Flocking subtly examined the mass hysteria of misled, tightly knit small-town community. Thomas Vinterberg’s disturbing Danish drama The Hunt (2012) also took a piercing look at the exceptionally cruel and unforgiving people. However, we know for sure that the protagonists of the aforementioned films were innocent and yet malevolently ostracized. But it’s the opposite in ‘The Here After’. John has definitely done the deed and spent two years in juvenile detention center (in Sweden the maximum sentence for crimes committed by juvenile is 4 years). Now this fragile-looking boy seeks rehabilitation among townspeople who welcomes John with deviant antisocial behavior. 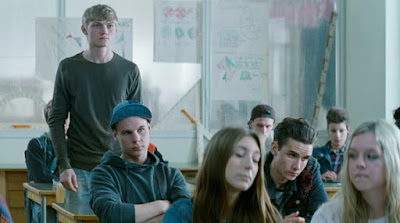 It’s best to experience The Here After firsthand than simply read about plot information and aesthetic design. Those who have the patience to watch restrained, slow-burn drama can delve into reviews after watching it first. Writer/director Magnus von Horn parcels out morsels of information in each scene and plays it through precise, contemplative visual design. Our interest is constantly piqued by his decision to not reveal too much too soon. Most of the shots remain painfully static and distant, forcing us to bear the on-screen emotional and physical bruises in silence (the lack of background music adds lot to the unnerving mood). The film opens with the shot of teenager John packing up his bags from the correctional facility. He looks frail and quiet. Yet the uncomfortable side glances and hard stares of people around him suggest that he has committed some heinous crime. Father Martin (Mats Blomgren) picks up John. The camera frames them from back-seat of the car as they travel alongside tree-lined road to their agricultural town. Martin’s concern for his son is evident in the way he forces John to wear seat-belts and through his forced positivity (he tells an awkward joke at dinner table among other things).

A neighbor’s gaze on John lingers little longer than necessary to increase discomfort. Younger brother Filip (Alexander Nordgren) casually bitter comments are scalding enough. In the supermarket aisle, John deliberately stands in front of a woman who tries to choke him. John decides to go back to the same school, despite knowing he would be subjected to acerbic actions. He silently provokes the fellow students to beat and bully him. Apart from dad Martin, classmate Malin (Loa Ek) shows empathy towards John. She is new to the neighborhood and has only heard of John’s past actions. Yet they both are afraid or unwilling to discuss about the boy’s feelings or indelible past. As the spasms of violence (against John) rises to threshold point, the boy’s young shoulders and heart struggles to bear. The steadily-flowing hatred makes it hard for John to continue his pursuit of absolution.

It would be easy task to realize blond-haired teenage as a ‘monster’ who masks his deviant interior through shy posterior. Director Magnus von Horn takes the hard task of realizing the murderous teenager as a human without watering-down the scope of his crime. Unlike The Hunt or Flocking, the story doesn’t deal with victim-hood or abuse because he welcomes punishment from the people by remaining passive and unbelievably tolerant. John’s restraint causes lasting tension in the narrative. Director Magnus intention is to not just showcase John as a victim. He rather studies how tolerance and compassion repeatedly taught is exercised on the practical side (in society). The depiction of the lynch mob isn’t one-dimensional or bluntly judgmental. Magnus focuses on both monstrosity and fear of the individuals that fiercely intends to cast away John.

The driving force of the film is Magnus’ understanding of the character dynamics, his carefully-constructed imagery, and Ulrik Munther’s central performance. Cinematographer Lukasz Zal (Ida) bathes the domestic scenes in blue light, suggesting the dysfunctional nature of John’s family. The director-cinematographer duo excels in blocking the scenes between John and father Martin. They often sit in different rooms (dad in dining room and John in living room), the noise of TV screeching in the background. The inability to transcend the father-son relationship is depicted through cold distance between the rooms. Although most of the scenes between John and Martin pass in brooding silence, what’s more interesting in the father-son relationship is the feigned attempt to bond. Martin gives his son shooting and driving lessons, yet their closeness is devoid of emotions. Such scenes only further accentuate the father & son’s taciturn behavior. The inclusion of a grumpy, dying grandfather into the family dynamics shoots up the sense of unease even in quotidian situations (like having dinner). Similar to Austrian auteur Michael Haneke’s works, Magnus strongly maintains the menacing atmospherics through the use of diegetic sounds. Nevertheless, there’s something unsatisfying about the ending. The high-charged emotional explosion is free of ambiguity and only confirms what we anticipated—that there is no chance of reconciliation or return to normalcy. Missteps and flaws aside, Swedish pop-star turned actor Munther’s understated performance grabs our attention. His sullen face, self-hatred and slowly burning rage cuts us deep.

The Here After (98 minutes) is a disquieting drama with a strong aesthetic sense that’s interested in examining the human darkness. It questions the possibility of repentance or second chances in unforgiving, hypocritical societies.