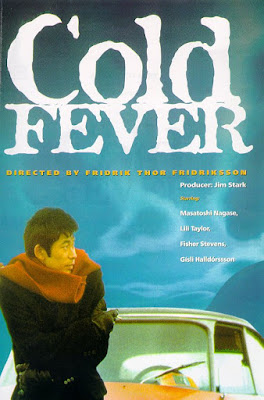 In the book ‘Cinema of Small Nations’ (edited by Mette Hjort), in the chapter analyzing Icelandic cinema (written by Bjorn Nordfjord), it is mentioned that ‘Iceland represents one of the world’s smallest national cinemas – one where the local and global meet face to face’. Although it’s called as the smallest (country’s population is currently around 331,000), the relative quality of Icelandic cinema is simply staggering.  Iceland cinema’s history mostly begins in the 1980s where productions financed and screened in Iceland designed to only appeal or address the Icelanders. It’s only with Fridrik Thor Fridriksson’s Children of Nature (1991) Iceland cinema gained international attention (the film was nominated for an Academy Award). The film tells the story of an elderly couple fleeing from their nursing home in Reykjavik (Iceland’s capital) to return for the final time to their home of youth. While the film possessed idiosyncratic Icelandic touches, it easily connected with global audiences due to its exploration of universal themes like death, nature, and life. Director Fridriksson used all the profit he gained from the film’s international distribution deals to establish his production company – Iceland Film Corporation. He bought some production equipment using that money and went to shape the glorious era of Icelandic cinema [the future of Iceland cinema marked as precarious after the major financial crisis in the country between 2008 and 2011. The government’s funds for cinema were increasingly reduced. Yet, Iceland continues to produce renowned films in the last five years – Volcano, Either Way, Of Horses and Men, Sparrow, Metalhead, Life in a Fishbowl, Rams to name a few] .

Fridrik Thor Fridriksson made his feature-film debut in 1987 with the drama White Whales. Prior to his debut, he made numerous documentaries as well as short experimental movies. For years, he ran a film society (in the late 1970s & 80s) and expanded its members to around 2,000. This was the time before VHS and when the attendance at the screening kept increasing, he used the money to buy a 16mm camera. After the renowned success of Children of Nature, Fridriksson continued his transnational narrative style in Movie Days (1994), which is set during Cold War days and examined the impact of it on the domestic community. Fridriksson’s fourth feature film Cold Fever ('A koldum, klaka', 1995) not only had a transnational narrative, but also a multinational cast and production team. Cold Fever tells the tale of young Tokyo business executive Atsushi Hirata (Masatoshi Nagase) traveling to the remote corner of Iceland in order to perform rituals for his deceased parents (who died there in an accident). The dead-pan humor plus the surrealistic and endearingly humanistic touches reminds us of the works of Jim Jarmusch and Coen Brothers. In fact, Mr. Fridriksson in his 2014 interview to critic Michael Glover Smith (in White City Cinema), confides the interesting set of events that initiated the making of the movie. 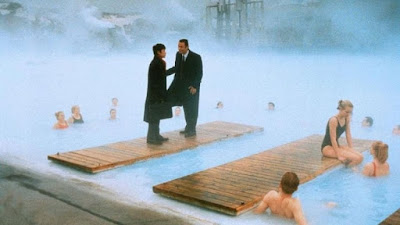 Jim Jarmusch was invited for the screening of his brilliant anecdotal comedy Mystery Train (1989) at Reykjavik Film Festival. Producer Jim Stark made the visit on Jarmusch’s behalf. When Fridriksson and Mr. Stark had an amiable conversation, there were talks of collaborating on a film. Stark asked the director to include Japanese actor Masatoshi Nagase in his new story ideas. Later, Fridriksson traveled to Japan to get a grip on his story when he came across the news about the death of two Japanese scientists in Iceland (by drowning). Japanese people traveled to Iceland to perform the due rituals and hence Fridriksson was bestowed with a narrative idea (Jim Stark also co-wrote the script for Cold Fever). Director Fridriksson states that he has deep love for Japanese cinema, so much that he used the chance to cast maverick Japanese film-maker Seijun Suzuki in a cameo role (to play the protagonist's grandfather in a scene).

The film opens in Tokyo, following the monotonous life of Hirata, and scrutinizes the confined spaces around him. He shrugs off his grandfather’s advice to perform ceremonies at the site of his parents’ death. Like his father, Hirata too isn’t very religious. Furthermore, he dislikes cold temperature and is all set to take a golfing holiday trip to the warm Miami. But, he feels certain guilt over the death of his parents. He wasn’t so close with them and feels he should at least do his duty now. Soon, Hirata is en-route to Iceland. On the plane, a foreign woman asks Hirata in English, ‘Is this your first visit to Iceland?’ She further adds ‘You are going to love it. Everybody does’ as if it’s also addressed to the movie-lovers who haven’t much explored the cinematic territory of Iceland. The shot is cut to a huge snow-covered mountain range which stands as the exact opposite to the earlier cramped spaces of glitzy Tokyo. The shot makes one more thing clear: that Hirata has chosen one of the worst times to visit Iceland – in the middle of winter with its non-stop snow-storms. 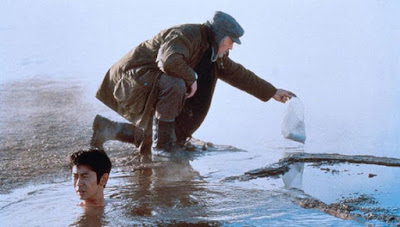 Cold Fever has one long running gag. It’s the joke of watching Hirata’s bewildered expressions upon confronting the poker-faced foreign tourists and eccentric natives. Similar to all the great culture-clashing road-movies, Cold Fever is memorable for its oddball characters. And only a very few of them are gimmicky interludes. The majority of vignettes are laced with humanistic touches. The movie also has a mystical edge to it that confirms to the unique Icelandic qualities or themes. The array of strange individuals Hirata meet includes: a foreign woman who collects photographs of funerals; a cab-driver who takes a break from work to perform his role in Nativity scene; and a strange girl whose screams shatter tall icebergs; and a very hospitable local guy who nudges Hirata to find inner peace in the world’s most remote and coldest  location. The Japanese guy drinks the stinging national beverage Black Death, hears blaring songs of Icelandic rock n roll, tastes ram’s testicles and sheep’s head, rarely allowing his frustration or delectation to raise above the surface of his face. 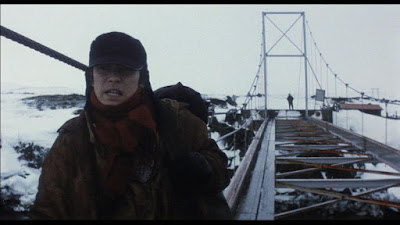 Cold Fever is both satisfying as mediation on life & death, and as a fine travelogue, capturing the striking different personalities amidst miles of stillness. The pleasure in the narrative is witnessing the hybrid account of the Icelandic’ness’. When Hirata is caught in the cruel weather or fails to eradicate his disorientation caused by interactions with locals, we get something different from touristic impressions. But later as he merges with the natural environment, he is more able to understand the basic good-hearted nature of the natives. The cultural or national barriers blurs as Hirata binds with the Icelander through the common thread of humanity. Director Fridriksson portrays nature in the same way as the people – both cruel and unbelievably poignant. The narrative trajectory not only hinges on showcasing the land and people’s peculiarities, but also weaves a holistic understanding of Icelandic existence. The multinational movie cast is terrific. Nagase is perfect as the inexpressive pilgrim (in Mystery Train he went to Memphis obsessed with American 50s and in recent Paterson he made a journey to visit the land of poet William Carlos Williams). The only vignette which didn’t work for me was Lily Taylor and Fisher Stevens’ cameo as a kooky American couple.

Cold Fever (85 minutes) is an immensely enjoyable Icelandic road movie blessed with wealth of ethereal imagery. It’s a must watch for those who love the cool indie comedies of Jim Jarmusch and can also serve as a fine introductory point to the quiet young yet intriguing cinema of Iceland.