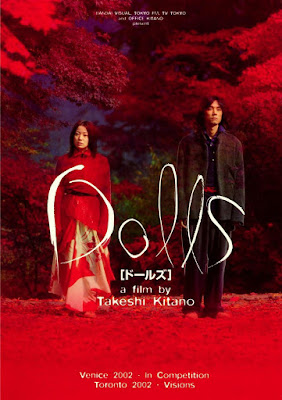 “I wanted to make movies that can't be pigeonholed. I want audiences to come out of this film not knowing what to say or what to think”, says the multi-faceted Japanese artist Takeshi Kitano (aka ‘Beat’ Takeshi). Mr. Kitano is one of Japan’s top media personalities. He is a poet, recording artist, actor, and once a stand-up comedian. But the most revered of his identities is when he masters the triple roles of ‘writing-direction-editing’. Although it’s hard to say what subject Mr. Kitano would plunge himself into in his subsequent films, there are few recurring elements in his film (good enough to be called as ‘Kitano-esque’). His best films are known – Sonatine, Hana-bi, Zatoichi – for their brilliant juxtaposition of harsh violence and poetic realism. Thematically, Kitano’s works keeps on brooding over love, existence, and fate. Furthermore, Kitano’s protagonists are mostly tough-guys (sometime Yakuza figures) whose deep sensitivity escapes through their hardened facial features over the narrative course. The editing and directorial style of sweetly swerving Kikijuro might be totally different than violent genre pictures like Brother, Outrage or Zatoichi. In spite of the wildly changing formal schemes, a bewitching, lamentable tone could be unmistakably felt in Takeshi Kitano’s cinema.

After facing lukewarm response to his American debut Brother (2000), Kitano distanced himself from restrained gangster films to attempt his most free-flowing movie yet. Kitano’s languidly paced art-house feature Dolls (2002) prioritizes visual lyricism over predefined narrative arc. Dolls portray three loosely interconnected tales, circling around the themes of love, obsession, and loss. The three stories of doomed love are full of achingly beautiful images, although its intended meaning (if there is one) isn’t always easy to grasp. The film opens on a literal stage with a Bunraku performance (traditional Japanese puppetry). The visible doll handlers control the sad characters (of this tale) as per the narrator’s voice. Subsequently, the puppets become the spectator and witness dramatic tales of tragic love. A young white-collar worker Matusmoto (Hidetoshi Nishijima) breaks off engagement with his true love Sawako (Miho Kanno) to marry the boss’ daughter. A decision heralded by his colleagues and forced upon by Matsumoto’s parents. Sawako in a state of despair attempts suicide and ends up in near-catatonic state. Burdened by guilt, Matsumoto runs away on his wedding day and kidnaps Sawako from the hospital. 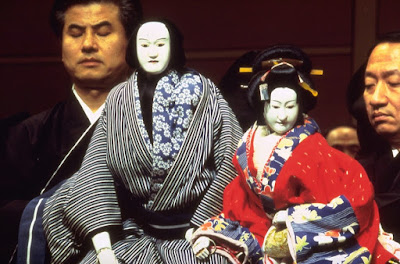 He decides to drop out of the society with her and go through a journey of reconciliation. The non-talkative, child-like Sawako is bound by a long red silk cord that binds her to Matusmoto. When we first see the lovers, the red cord brushes through the cherry blossoms, while people gathered around tease them as ‘bound beggars’. An aging Yakuza boss Hiro (Tatsuya Mihashi) with an existential crisis one day visits a park, where he discovers the girlfriend Ryoko (Chieko Matsubura) he once had abandoned as a young man, still anticipating his (every Saturday) return at the park bench. A famous pop-star Haruna Yamaguchi (Kyoko Fukada) inspires idolatry among the alienated men. Nukui (Tsutomu Takeshige), an introverted traffic controller, is one of her most devoted fan. When the pop idol is caught in a car accident which slightly disfigures her face, Nukui takes extreme measures to prove his ardent love. The pair of bounded star-crossed lovers passes through different seasons and also the principal players of other tales, while teetering towards their inevitable fate. 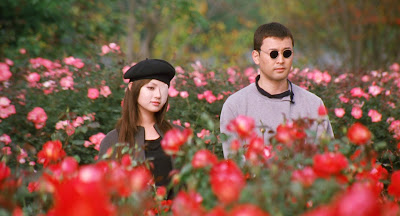 Kitano’s movies are familiar for slight surrealistic or magical realist touches amidst the formal mode of restrained naturalism. In Dolls, the narrative is entirely diffused with hyper-reality and magical realism. The stylistic opening passage of the Japanese Bunraku performance sets the stage for film’s unreal aesthetic appearance. Since it’s the dolls that use humans as form of puppet characters, Kitano’s atmospherics are tinged with sumptuous imagery which isn’t necessarily realistic. The deliberate theatricality of the aesthetics is designed to circumvent the conventional dramatic tension. The bound beggars’ journey through four seasons is captured in glorious color schemes. Matsumoto and Sawako’s costumes progress down from modern-day dress to traditional Japanese robes (majestically designed by famous costume designer Yohji Yamamoto) as they shuffle through sunny land patches, cherry blossoms of spring, red maple leaves of autumn, and white snow of winter (glorious cinematography by Katsumi Yanagishima). The sharply contrasting flow of seasons may indicate the lovers’ impossibility from liberating themselves from the cycle of misery and fate. The extravagant costumes and the color-coordinated landscapes keep intact with fanciful imagery, since in real life the homeless lovers’ would be dirty, and dressed in tatters. At one point, we see the red-color maple leaves moving on to snow, as the camera pans up to showcase vast snow-capped landscape. Director Kitano says he included the shot to denote “it's as if it was a play, and the set is being changed.”

The three tales aren’t attached with huge emotional appeal. Their lives are destroyed by some strange twist of fate. Moreover, the characters themselves make mistakes and spoil the love rather than exterior forces. The mistakes are done out of self-love and free-will. And, the amends are made through stranger ways too. The lovers’ gestures to uphold the spirit of love may seem ultimately pointless, but it definitely provokes our empathy. The stretched-out acts of repentance also lead to devastating, yet beautiful images. The theme of looking is consistently established from the beginning of the narrative. Shots are often visualized in subjective mode with the blank-faced characters often watch over something: an angel toy, stomped butterfly, maple leaves, etc. This subjective mode underlines the film’s magical realist vision.  The Bunraku references and other deep layers of symbolism might be lost over those not well-versed in Japanese culture (like me).  Dialogues, as usual are kept to bare minimum. Nevertheless, the emotional purity of the characters easily penetrates through the narrative’s placid surface. The haunted, repressed expressions of anguish from Nishijima and Miho Kanno (the central pair of lovers) are thoroughly heartbreaking. Miho Kanno especially wrings our tear in more than one occasion. The scene of her bursting into tears over the inability to play with broken toy effortlessly heightens our emotional pains. Most agonizing was the scene towards the end, when Matsumoto hugs Sawako, begging her forgiveness, after she clutches her silver chain, in a brief moment of epiphany.

Those who have the patience to emotionally invest themselves in Dolls (113 minutes) would be rewarded with a dazzling and deeply affecting movie experience. Takeshi Kitano, despite taking occasional self-indulgent turns, depicts these very simple tales of love & loss in a mesmerizingly powerful manner.

nice narration of ur review