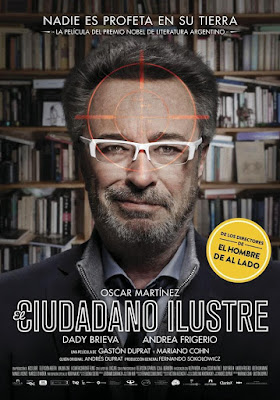 There can’t be a more insulting question posed to a writer than ‘why can’t you write about nice things?’. This is the question posed to the protagonist of Gaston Duprat and Mariano Cohn’s The Distinguished Citizen (‘El ciudadano ilustre’, 2016), who is a Nobel Laureate returning to his economically depressed Argentinian hometown Salas after a gap of 40 years. The directors say that the small-town setting was realized as a microcosm of the Argentine society, especially its mean side. But the social and cultural inhibitions embraced by the townspeople could stand as a fine miniature of the human society in general. From chauvinism, ideological fanaticism to cultural snobbery and utter mediocrity, the unpleasant things and attitudes of Salas reflects a sort of universality. In such a hypocritical, ignorant, and idolizing society the write often fights a lonely or losing battle against the absurdities of human condition. However, as in real-life, the writer protagonist of Distinguished Citizen also gives into vanity and spitefulness. The gulf between the thoughts and actions or behaviors -- on the part of writer and society on the whole -- plus the unfathomable contempt that fame triggers is what the Argentine film-makers are interested to explore in this black comedy.

The Distinguished Citizen is the fourth feature of directing duo Duprat and Cohn. The duo have remarked that they have chosen the protagonist as a Nobel Prize winning writer because no Argentine writer, in reality, has ever received the coveted prize (including the great Jorge Luis Borges) and because it’s common for a writer, unlike other artists, to perpetually keep the hometown as their work’s constant backdrop. Duprat and Cohn, who had also served as cinematographers, conjure visuals that don’t contain any eye-catching cinematic qualities. It’s as simple as the stagings witnessed in subtext-rich Romanian New Wave films. ‘What’s simple can be truly subversive and disturbing’ says the central character about writing which resonates with the film’s visual language too. Divided into five chapters, the film opens with Daniel Mantovani (Oscar Martinez), aged around 60, in Stockholm to accept the Nobel Prize for Literature. His acceptance speech is unexpectedly aggressive, in which he wonders if he had lost his ‘revolutionary’ label since he is now being acknowledged by the ‘establishment’. Despite the crudely critical speech, Mantovani accepts the award, may be out of vanity. 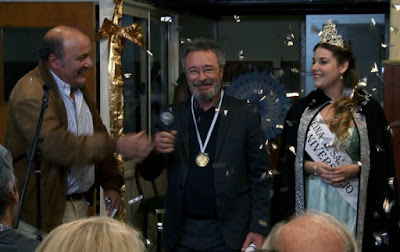 The narrative then fast-forwards to five years after the Nobel Prize victory. We see the wealthy writer’s opulent Barcelona mansion (which includes a sprawling library) as he is seen sitting forlornly and rejecting all the prestigious invitations from around the world. The fact that he has become the part of establishment didn’t bestow Mantovani the urge to write. His publisher is still questioning whether he has started writing anything new. Amidst the numerous invitations uttered by his smart personal assistant Nuria, one thing however gets Mantovani’s attention. It’s an invitation from the mayor of his hometown Salas, who desires the writer would visit his hometown and accept the ‘Distinguished Citizen’ award.  Although he has comfortably lived in Europe for the past four decades, Salas has served as the inspiration for all of Mr. Mantovani’s novels (“my characters were never able to leave, while I was never able to go back”, he quips). The writer has mostly painted a less appreciable portrait of the town’s inhabitants, yet the locals are proud of its most famous son. To his personal assistant’s dismay, Mantovani decides to go alone for the 3-day trip to Argentina and requests to not pass this news to any reporters.

The trips commences with few lightly humorous situations with the pilot on-board broadcasting the presence of a Nobel Winner on the flight and a mentally challenged person awarded with the duty to pick up Mantovani at airport. Soon after taking a short-cut in the remote countryside, the car Tyre blows up and there’s no spare. They both spend a night on the dry land using the books of Mantovani to light a fire and for toilet papers. Mantovani, who is an astute observer of human absurdities and foibles anticipates this. Next day, a cheesy and eulogized short documentary about the writer’s life is screened at the town’s center and Mantovani is visibly reduced to tears. It’s a rare expression of nostalgia, since Mantovani’s alleged writings and the narrative itself trains its eye on the acerbic and relentlessly repulsive human behaviors. The local beauty queen awards the writer 'Distinguised Citizen’ award and the town’s mayor makes a rousing speech. Everyone is gentle to him, but it’s made clear that they respect him more for his reputation (Nobel Prize) than actually for his works. Mantovani’s darkly hilarious routines in the town include being a judge for annual drawing competition and to provide a 3-day lecture. He also meets his old friend Antonio (Brieva) who is married to Irene (Frigerio), his former girlfriend. Soon, every one in the town desires a delicious piece of the writer’s fame. Bouts of jealousy, old & new resentments slowly rise to the surface and the increasingly frustrated Mantovani comes across one unsavory encounter after another. 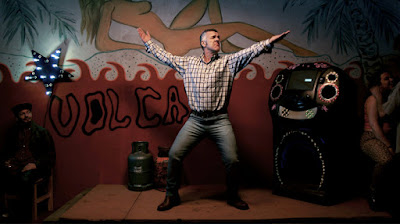 The Distinguished Citizen doubles up as a cautionary tale and comedy of manners about the dangers of romanticized nostalgia (the lost innocence couldn’t be found because it was not there in the first place). It’s also a dark satire on the ossified institutions and societies which perpetually calls for cultural conformity and mediocrity in everything (including art). Largely shot using hand-held cameras, the deliberately dull visual pattern of Duprat and Cohn, cooks up nuanced comedic situations and retains the vigor of great mockumentary works. The lack of specific visual signature in a way provides depth to the proceedings. The script (by Andres Duprat) boasts a rich sense of comic timing and profoundly thoughtful dialogues (especially when the writer debates about ethics, artistic responsibilities and artistic freedom). Oscar Martinez’s (Paulina, Wild Tales) explosive central performance instills the bleakness and wittiness in equal measures. Mantovani isn’t written or performed as a quietly dignified writer. Martinez handles his character very well when succumbing to irksome, vainglorious behavior. There’s a kind of ambivalence about Mantovani, which constantly makes us wonder whether he is a hero or anti-hero. It’s what makes both the character and performance often intriguing. Perhaps, the film’s central flaw also arises from there since much is focused on the protagonist’s perspective that we never get into other character’s head. They mostly come across as puppets aligning themselves to this specific satirical vision. Perhaps with a little more empathy, the film could have been a more deep and a well-rounded character and societal study.

The Distinguished Citizen (118 minutes) is a visually sparse yet extremely engaging black comedy about the unalterable absurdist human behaviors. Through one writer’s ill-fated home-coming, the directors Gaston Duprat and Mariano Cohn portray how conformism and celebration of mediocrity are the truest enemies of any artistic creation.