Harmonium [2017] – A Haunting Dark Parable of Sin and Guilt 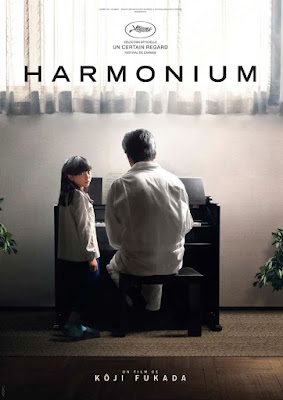 In the recent years, Japanese cinema is producing family dramas that don’t wholly treat family as the sacrosanct entity, and its old-age wisdom as the only means of preserving social order. Instead of making up the family units as the salient feature of onscreen Japanese quality, these contemporary dramas explore the inherent solitude and disorientation brooding upon the seemingly close family members. In that vein, Koji Fukada’s Harmonium (Fuchi ni tatsu, 2016) showcases us a family that appears secure and functional on the outside. But when looked closely they just remain as lone individuals, trying to bind themselves within the preconceived expectations of their familial/gender roles. Father Toshio (Kanji Furatachi) is the typical conservative patriarch who doesn’t verbalize his emotions. He seems to be caught up too much in his vision of strict dad that he shuns the role of a caring husband. Toshio has a profitable machinery workshop at the front of his house. Akie (Mariko Tsutsui), the family’s matriarch, hardly communicates with her husband and is determined to teach her energetic ten year old daughter Hotaru (Momone Shinokawa) to master the harmonium for an upcoming public performance at the school (she’s also sewing a bright red dress for Hotaru to wear at the performance).

Akie is a devout Christian who staunchly believes that with love one can bring out goodness within any individual. Hotaru, blessed with an inquisitive attitude, tells her parents about a spider species, in which the female allows the children to eat her. Akie reassures her daughter that the mother spider will go to heaven. Was spider’s sacrifice attributed to its maternal instinct? Or did the spider have any choice to safeguard itself? How much of this idealized family life is built upon one’s ability to take on unrelenting emotional burden without exhibiting dissatisfaction?  The spider question, of course, hints at the sorrow that's forthcoming to deluge the family. The breakdown or journey into the void starts with the arrival of Toshio’s old friend Mr. Yasaka (as usual, a bewitching Tadanobu Asano). Genteel, well-spoken, and perpetually dressed in a pure white-shirt, Yasaka sets off chaos that gradually gnaws at the family’s stable quotidian life. 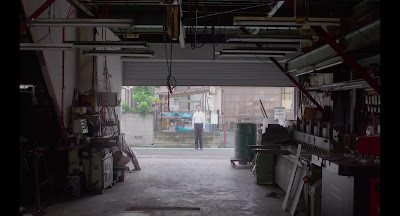 Director Koji Fukada mentions that the basic idea for Harmonium was written back in 2006, even before he made his debut feature in 2008. Although Fukada’s previous works Hospitalite (2010) and Au revoir L’Ete (2013) were heralded in film festivals, I haven’t had the chance to see those movies. The haunting nature of Harmonium surely proves why he is one of the interesting contemporary Japanese film-maker (the film won Jury Award in Un Certain Regard section of 2016 Cannes Film Festival). The story of a intruder disrupting a harmonious family has been a device used from Hitchcockian days (Shadow of a Doubt, 1943). But there’s something distinctive and timeless in the way Fukada studies this Japanese family, highlighting that solitude is indelible part of our human condition, irrespective of the multiple roles we play in family or society. The foremost brilliant aspect of Harmonium is the setting which elegantly ties up the family’s work life and home life. Spatially, it’s a very intriguing set-up, effortlessly entrapping us within the character’s private and public space.

Koji Fukada’s film-making sensibilities appear to be an effective commingling of the styles of cinematic masters Hitchcock, Michael Haneke, and Yasujiro Ozu. The collaborative environmental setup, carefully selected visual schemes, relaxed staging of family’s quotidian activities, the symmetrical shots lingering on certain gestures or objects to generate fear, and the quality of maintaining respectful distance between performers and camera (avoiding close-ups) meticulously immerses us into the realm of psychological terror. The narrative is perfectly divided into two parts: the first hour demonstrates the inevitable fatal blow hurled upon the family; and the second hour explores their heartbreaking recovery as fate brings upon more cruel twists. Stone-faced yet seductive, Yasaka and Toshio share a secret and woeful past. Yasaka has been released from prison after serving time for murder. Oddly, Toshio takes him in without any hesitation (the reason is predictable and conveyed later). Yasaka quickly bonds with little Hotaru, since he skillfully plays the harmonium. Although, Akie is initially wary about Yasaka, he slowly gains her trust. He later elaborately confesses his past crimes to Akie over a dinner at a restaurant, and it’s hinted that may be Akie is warming up to her husband’s friend a bit more than necessary. During a family outing, Akie and Yasaka look at red petals of a tree before hesitatingly stealing their first kiss. The seemingly simple love triangle turns sinister when Akie rejects Yasaka’s sexual advances. The ex-con’s hidden fury resurfaces and culminates with a distressing violent act. In the second-half of the narrative, Yaska is largely absent yet that itself is as distressing as his presence in the first-half. Toshio and Akie are stripped off their complacency and sense of love, and only left out with grief and desire for retaliation. 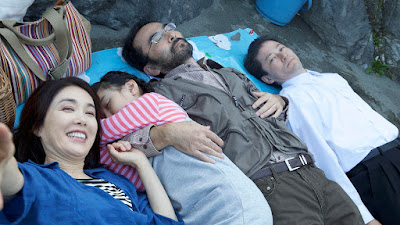 Director Koji Fukada and DP Ken'ichi Negishi’s frames keep the relationship between lens and performers simple. Perpetually shot at the height of characters’ eye-line, Fukada maintains certain distance to avoid explaining the intent of the characters or a particular scene. This provides ample space for ambiguities and to examine ruthless ironies of fate. Even though Fukada’s use of color to exhibit characters’ layered emotions seem fascinating at first, the approach becomes a little too overbearing towards the end. In one particular scene, Mr. Fukada brilliantly employs color as a visual cue: when Yasaka takes away his crisp white shirt to reveal a red t-shirt, hinting at the fury he is going to unleash. While the director explores the familiar themes of complicity, sins of father, redemption and revenge, he also diffuses a potent commentary on circumscribed gender roles, which especially demands unfaltering willingness from women to sacrifice and surrender themselves.

The transition between Hitchcokian wicked charm of the first half (also reminds us of the recent brilliant thriller The Gift) and the utterly desolate Haneke-esque second-half is realized without much erratic change in tone. And, even at times the narrative loses its subtle touch in the later half, the astounding performances keeps things at a boiling point. The verbal showdown between Akie and Toshio over Hotaru’s predicament impressively conveys the dark emotions bubbling under the surface. Mariko Tsutsui was splendid in this scene as her saddened Akie finally realizes the huge unaddressed breach in her marriage with Toshio. Star actor Tadanobu Asano almost makes us believe in Yasaka’s poignance and humility. Asano never tries to explain Yasaka’s emotions or attitude at any given moment yet there’s always something unnerving about him. Kano Mahiro’s grown-up Hotaru and Taiga’s callow Takashi turns in strong performance which keeps on escalating the film’s devastating tone.

Harmonium (120 minutes) is a deeply unsettling morality play that observes the gradual disintegration of a seemingly idyllic family. The absence of emotional catharsis and slow-burn nature of the narrative may frustrate some viewers, but I was deeply affected by its elegiac reflection on domestic disquiet.