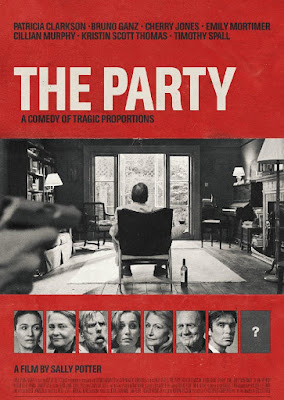 British film-maker Sally Potter’s black comedy The Party (2017) is about confronting the truth. When Ms. Potter was shooting the film the Brexit referendum happened. She says that had a reasonable impact on the production since her script dealt with the importance of telling truth in personal and political lives, and further adds that her vision in The Party is of a ‘broken England’. But Sally Potter perceives and duly transcends the tragedy by injecting a good dose of ink-black comedy. The Party is what we refer to as chamber drama as tension and rage gradually heightens after the arrival of a group of disparate individuals meshed within a confined space. While this setting usually spawns thrillers with bucket loads of blood, Potter’s movie subtly wreaks carnage using exquisite verbals. Lensed by the marvelous Russian cinematographer Aleskei Rodionov (who previously worked with the director in her most famous work Orlando), the film’s monochromatic visual tone blocks out realism to provide ample space for the characters’ escalated emotions. The plot may sound like it’s an adaptation of a dull stage play, but Potter’s original script combined with Rodionov’s elegant aesthetics and fantastic ensemble cast largely eschews the worst aspects of the stagey atmospherics. The film’s running time – 71 minutes – is its other huge advantage.

Kristin Scott Thomas plays Janet, who has finally achieving her life-long dream of becoming ‘shadow’ Minister of Health in the UK Parliament. She is throwing up a little party to celebrate her appointment with her small circle of intellectual friends. Janet’s husband Bill (Timothy Spall) has provided immense support for his wife to pursue her dreams. But now he pours himself some red wine, plays old records, and sits in the living room in an aloof manner. The reason for his aloofness is revealed a little later. But, before that Janet and Bill’s friends arrive: middle-aged April (Patricia Clarkson), an American with a cynical and superior attitude, her new German boyfriend (Bruno Ganz), a healer who talks like a guru, a feminist and lesbian professor Martha (Cherry Jones), her anxious partner Jinny (Emily Mortimer) who has just confirmed her pregnancy, and Tom (Cillian Murphy), the Irish Banker and husband of Marianne, -- Janet’s subordinate – who's supposed to arrive bit later. The gathering starts with amiable toasts to hardworking Janet and Bill. However, as one can expect all hell breaks loose. 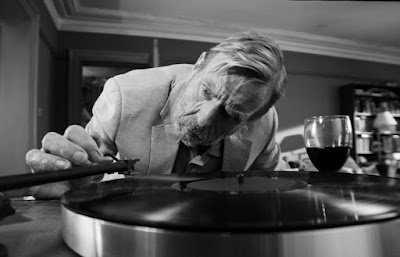 Bill says he has an announcement. He is diagnosed with some kind of terminal cancer. Janet’s joy instantly crumbles as she sits closer to her husband, and promises to be there for him as he was throughout her career. But things aren’t that easy. For one, Janet is seen texting to some mysterious lover and Bill has more unsavory things to confess. What’s funny is how the intellectuals with all their combined knowledge rather than soothe their host’s perturbation, engages themselves in ideological battle. The ensuing remarkable debate touches on themes of feminism, faith, democracy, and political anarchy. The dialogue on Bill’s terminal illness suddenly leads to discussion of UK’s National Health Service. All these rational minds gauge the problem in front of them through an irrational or indifferent lens and by self-indulgently referring to their strict belief systems. There are peculiar things happening in the house too: like Tom, who is so rattled for an unknown reason that he often locks himself in the bathroom and sniffs some cocaine. 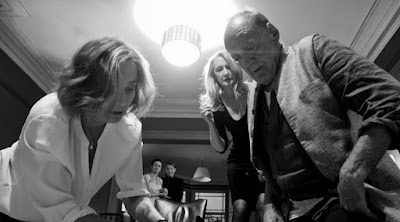 The characters may contain little in the way of redeeming features, but put together in a confined space, their polarizing thoughts perfectly clash with each other, amplifying tension as well as dark humor. Patricia Clarkson’s wry smile and acerbic wit is the most enjoyable facet of the narrative. Her April regards humanity through a prism of despair and disapproval. Timothy Spall’s somnabulant presence as Bill hits a fine halfway note between fun and tragedy. Bruno Ganz who usually plays the 'cunning German' is cast against type. His expression of deep compassion and Zen-like composition as Gottfried fleetingly reminds us of the affable angel Ganz played in Wenders’ Wings of Desire. Kristin Thomas plays the narrative’s most conflicted role with whirlwind of energy. Director Sally Potter who has framed some of her best shots in closed quarters (in Orlando, Yes, Ginger & Rosa) gracefully moves through the cramped London flat to best capture the action. The script doesn’t just address the muck-ups of parliamentary politics, but also focuses on the politics that drive human relations. Potter takes pot-shots at intellectual superiority which is far removed from speaking truth or acknowledging the importance of love. She overtly shows that politics is omnipresent and adds that such politics is not a bad thing when it’s driven by a language of truth. Potter doesn’t exactly circumvent from theatrical approach or that the plot is very innovative. However, there’s spontaneity and loaded charm affixed to the performance and writing which bestows the movie a surprising power.

Stuffed with witty, sharp-edged dialogues and striking ensemble performance, The Party (71 minutes) is a crisp chamber piece about frustrated idealism and broken love. It doesn’t have a great pay-off or possesses lot of staying power, but delivers vicious fun as promised.

Nice review. Now I want to see this movie!