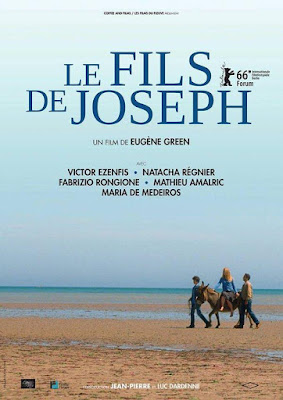 French-American film-maker Eugene Green has slowly evolved to be one of the contemporary cinema’s charming eccentrics. Mr. Green pursued a career as an educator in baroque theater and made his first feature – Toutes Les Nuits (2001) – at the age of fifty-four. Since then the film-maker has created an idiosyncratic body of work, bringing a strict formal approach (influenced by baroque art forms) to staging that’s accompanied by purposefully stilted acting and wry sense of humor.  With Eugene Green, we can use the term ‘avant-garde’ in a positive sense, not simply as a pejorative. Although defined by style and high culture, Green’s movies evoke interesting emotions and warmth which bestows a pleasant escape from the ugliness of modern realities. The director’s latest movie The Son of Joseph (Le fils de Joseph, 2017) returns to his recurring theme of broken family units, father-son relationship, and also designed as a quirky modern-day interpretation of the Christian imagery. Moreover, it happens to be the director’s most accessible and fun film.

Divided into five chapters (each title has deep Bible influences), The Son of Joseph tells the story of a dispossessed Parisian teenager, Vincent (Victor Ezenfis), who lives with his hard-working single-mother Marie (Natacha Regnier). Despite showering selfless love on her son, when Vincent questions about the identity of his father, Marie repeatedly insists that he has no father. Vincent intensely studies the wall-sized replica of Caravaggio’s 1603 painting ‘Sacrifice of Isaac’ (God ordered Abraham to sacrifice his son Isaac as a test of his faith) and almost buys a knife at a store to release the pent-up frustration regarding his father. One afternoon, wilful Vincent goes through his mother’s belongings to find a letter to Oscar Pormenor (Mathieu Amalric) in which she mentions she has borne his child. In the grip of anger and curiosity, Vincent cooks up a pseudonym to meet his biological father. Oscar is a rich, successful publisher whose philandering behavior has consistently brought agony closer to him. Oscar’s elite literary society is painted in satirical brush, filled with obnoxious artists and totally clueless critics. Vincent hatches a revenge scheme upon Oscar, but completely bungles in execution. However, circumstances bring him to meet Joseph (Fabrizio Rongione), Oscar’s brother, who instills a more genial paternal influence on the teenager. 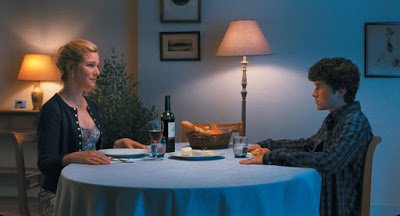 Combining the droll formal sensibilities of Robert Bresson and the light-hearted playful touches of Luis Bunuel, Eugene Green’s film-making signature brilliantly and unpredictably conveys the otherwise familiar dramatic information. In an interview to ‘Film Comment’, Mr. Green says, “I also like to try and capture the energy that comes from absence or from absence after presence. So, for example if a character is going to enter the frame, I usually start with an empty frame and, for example a foot shot, a foot frame—I do a lot of foot frames. I often start on the ground and then the feet enter, so the spectator feels the distinction between the empty space where there’s no presence and the physical presence.” In Son of Joseph and in his five other feature films, the director often constructs a scene where the perspective is slightly removed from the main action unfolding on-screen. For example, Oscar’s delightful rendezvous with his tall secretary happens on the couch, while the camera stays on the ground (taking the perspective of Vincent’s hiding spot) and gazes at design of the sofa from under with its springs moving in tandem with the action above. The other predominant visual signature of Green is conveying information and changing emotions through minimally designed frames. From the cocktail party to Joseph-Marie dinner date, and the final revelation at the beach, Green’s simple yet erudite frames despite the lack of naturalistic feel, wonderfully outlines the character’s motivations and emotions. 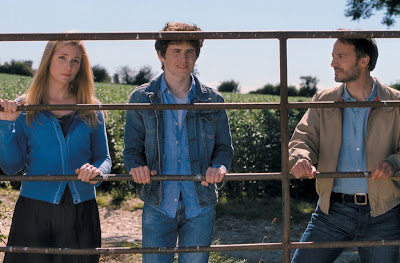 The great social-realist film-makers Dardenne brothers have served as producers for the film. It’s strangely interesting since Green’s formal approach is totally opposite that of Dardennes’. In fact, Eugene Green’s rigorous deadpan style may drive most of the viewers up the wall. However, The Son of Joseph boasts some of the uncannily enjoyable touches that’s reminiscent of Wes Anderson's films. Usually, the director’s film wouldn’t have such a straightforward clarity in depicting a parable. But that’s what makes this film (comparatively thin with symbolism) a perfect introductory point to Green’s disparate oeuvre. Green states ‘his films are often about interruption of transmission’. And, so his narratives eventually try to bring back the flow of transmission. But, transmission of what? Love, empathy and wisdom between the alienated young and exasperated matured adults or vice-versa. It’s a wonder how The Son of Joseph and other Green’s films contains psychological complexity and deep emotions despite his camera pointedly stares at the character’s faces. The performers never come across as dismissible props and the frivolous tone doesn’t turn lifeless. The acting may not be realistic, cloaked with dense layer of artifice, but gradually this particular way of speech and stilted dynamics becomes in itself a lucid language, channeling the due emotions to us. From newcomer Victor Ezenfis to veteran actors Rongione and Amalric, they finely deal with the unbending material to squeeze in the right kind of touching emotions.

The Son of Joseph (113 minutes) is an inventively off-beat and modernized take on the Nativity Story which grapples with the timeless themes of religious faith, familial harmony, paternity and inter-generational relationship. Like all of previous Eugene Green’s works, it would confer truly intriguing experience when watched with open-mind and plenty of patience.

Arun, for me probably your review is much more interesting than this film itself. Just the idea of sitting for 2 hours looking at stilted speech & acting with a formal backdrop makes me feel drowsy. On the other hand, your description is entertaining! ;)

Thank you sir. Yes, the director's muted, slow-burn narrative style would be kind of off-putting for many viewers.