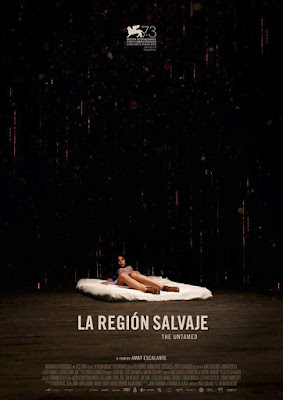 I am not a fan of Mexican film-maker Amat Escalante’s movies. He is so confrontational and puts shockingly literal images; provocative just for the sake of it. His works, for better or worse, definitely imprints the shock images to our memory. In the process, I feel he remains oddly distant from his characters whom he carefully realizes in the initial sequences. For example, take the penis on fire scene in his 2013 drug war film Heli. The torture is depicted in vivid details including the CGI fire imagery that it merely becomes a talking point and numbs us with jolts of shock. May be as French shock auteur Gaspar Noe says, “When you make movies, you want to play with audience. It’s part of the fun”, it’s all seamless merging of exploitation and art. Nevertheless, Amat Escalante or Gaspar Noe’s films seem only heavy-handed compared to the calculated explicit directness of David Crononberg or Alejandro Jodorowsky. But contrary to my expectations, Escalante’s latest film The Untamed (‘La Region Salvage’, 2017) offers a more subtly unnerving movie experience. It isn’t entirely devoid of the outre elements that define the director’s works. What’s interesting here is the fundamentally weird set-up which provides ample space to deal with sexual, cultural, and social issues, and moreover Escalante’s much-restrained style weaves a lot of lyrical, ponderous images.

The Untamed (2016) is an art-house erotic horror, in the vein of Andrzej Zulawski’s Possession (1981) where a sleazy, nebulous creature is portrayed as a conduit for the characters’ repressed desires and fears. In the astounding opening series of shots, we glimpse at a meteorite [not exactly the kind of image we expect from a Mexican movie], followed by a naked girl being pleasured by a slithery tentacle. Then, she is seen bleeding from a cut on her side and slowly walking amidst thick fog towards her white motorcycle. In the interview to FilmComment (conducted by Chloe Lizotte), the director says he derives inspiration for his movies from isolated, random images that truly speaks to him. This series of images seem to have deliberately hidden some pieces to figure out the whole puzzle, yet what we witness intrigues us, channeling some ominous whisper to our heart and mind. The narrative abruptly cuts to a social-realist atmosphere. Alejandra aka Ale (Ruth Ramos) is seen lying alongside her husband Angel (Jesus Meza) in their bedroom. It’s early in the morning and the shot captures Ale’s face in vivid details as Angel grunts with pleasure during sexual intercourse. Ale lays detached from herself, gaining zero pleasure from her husband's act. 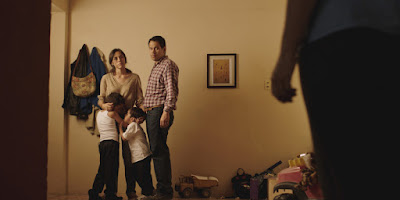 Ale works in a candy factory owned by her mother-in law and Angel works in construction with his macho buddies, deluged with views of homophobia and misogyny. The couple has two little boys and both Angel and Ale have to work to run the family. Veronica (Simone Bucio) – the girl seen in the opening scenes – meets a genial male physician Fabian (Eden Villavicencio) while treating herself of the injury. She says a dog has bitten her. Fabian happens to be Ale’s younger brother. He is a homosexual who interestingly has an affair with his sister’s husband Angel. Angel ridicules Fabian in the presence of Ale (repeatedly using the term ‘faggot’). However, the violent feeling Angel exhibits toward his own sexuality doesn’t make him neither a good husband nor a father. Meanwhile, Fabian develops a friendship with Veronica who also gives him a truly bizarre opportunity to explore his sexuality. We don’t know what Fabian encounters in the dense woods Veronica takes him to, but he seems happy. Nevertheless, brutally violent things happen and later Ale is seduced into the defiantly carnal world of Veronica. 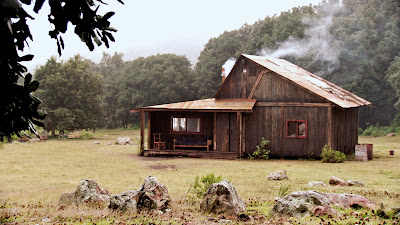 Up until the one-hour mark, our worst fears about the narrative aren’t confirmed, although Escalante retains an unnerving, chilling quality to the proceedings. There are no standard horror-genre thrills and barring few trademark shocking scenes, the edgy tone constantly unsettles us. The good thing about the movie’s allegory is that it’s multi-faceted. The untamed tentacled being in the secluded farmhouse, deep inside the gorgeous forest, doesn’t just represent one thing, say disintegration of the marriage. Even the title ‘Untamed’ could be used to indicate the human characters as much as the creepy 'Lovecraftian' creature. The creature could stand-in for variety of social, cultural issues, starting from casual misogyny, homophobia, repressed sexual desires, collective hypocrisy, burdens of heterosexual marriage (especially for women) to violence, and addiction. Furthermore, Escalante’s tonal juggling between social-realist atmosphere and unsettling sci-fi/fantasy set-up works for the most part of the narrative. With most of the films when a hidden creature is revealed, the gathered fear wanes immediately. The Untamed, however, keeps alive the sense of dread, partly because it’s not painted with the usual brush of ‘monster’. The way this slimy extra-terrestrial thing induces carnal desires in humans mounts the sense of dread. Moreover, the uncannily carnal mystery surrounding the creature is preserved till the end (to put it simply, there are no answers to be found here).

Yet Untamed doesn’t always rely on ambiguity and tends to leave everything to our (nasty) imagination. Oft there are cuts to shocking and very direct images of penetration, reminding us that it’s, of course, an Amat Escalante movie. Just when we think the inter-species coitus is rightly left out to only focus on how the desire for sex (in Ale & Veronica) becomes more of an addiction than offering feelings of gratification, there’s a prolonged shot of Ale shackled to the creature’s tentacles with one sliding into her mouth and other into her vagina. The sensuality the film-maker builds up simply mixes with such provocative scenes to somewhat create a bitter aftertaste. These deliberate attempts increases the disturbing quotient of the narrative, however, it also arguably dilutes some of its thematic power.

Interesting Review.
Wishing you a great year ahead.