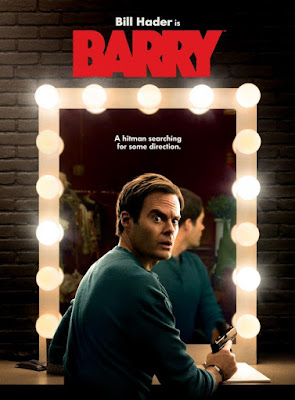 Bill Hader plays Barry Berkman, a professional hitman, who in the series’ opening scene stands over a corpse, lying in the bed with a bullet to the head. But, make no mistake this splendid new HBO series has plenty of laugh-out-loud moments, the comedy being mostly wry and dark. HBO’s half-hour eight episode series Barry (2018--) commits to a bold, if not a very familiar, premise: an anti-hero desiring to renew his identity. The catch is he seeks the change out of boredom, not wholly due to feelings of remorse or fear. Hence, similar to all the anti-heroes of good TV, Barry’s self-deception and malevolence only escalates alongside the manner he impetuously clings to his newfound dreams and passion.

Bill Hader with his slack face and big lifeless eyes (who co-created the series with Alec Berg) is a perfect fit for Barry, a former Marine now working as a contract killer. Under his handler/father figure Fuches’ (Stephen Root) orders, Barry expertly does each hit. He has numbed himself to do the job, but lately Barry is depressed. Despite insisting upon the irreparable damage he does, in the name of killing, show creators Hader and Berg primarily makes us sympathize with the guy. If we could brush aside Barry’s choice of profession, then his effort to overcome depression, to find new purpose and passion in life would resonant with us directionless souls seeking respite anywhere. But of course, it’s hard to avert the focus from his life of crime and accordingly our slight affection for the anti-hero is constantly put to test. 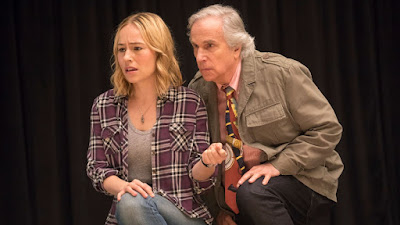 Fuches sends Barry to L.A. to decompress as well as make an easy hit for the Chechen mob. Once in L.A., Barry pursues his mark Ryan Madison (Tyler Jacob Moore) to an acting class, helmed by an old failed-actor/acting coach Gene Cousineau (Henry Winkler). Barry the fish-out-of-water is easily swept away by Cousineau’s extolment of live theater and his starry-eyed wanna-be actors. Post-class, Barry drinks with Sally (Sarah Goldberg), a flighty woman striving to catch her break, who ostensibly becomes Barry’s love interest. Barry’s an awful actor, but he sees the medium as a better way to channel his anxiety, rage, and love, feelings he didn’t know he still has. The assassin hopes to balance his criminal life with the burgeoning love for Sally and acting. But when Ryan’s hit goes wrong, Barry finds himself at odds with Chechen crime boss Goran Pazar (Glenn Fleshler) and his sidekick Noho Hank (Anthony Carrigan), a criminal outfit full of oddballs. Meanwhile, the series of gang-related murders attracts the attention of the police, particularly the no-nonsense Detective Moss (Paula Newsome), who traces back the leads to Cousineau’s acting class. 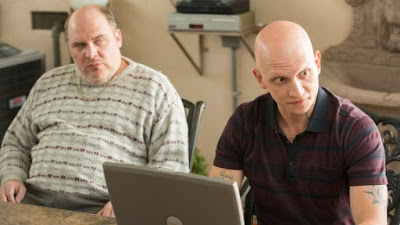 Hader and Berg’s writing is marked by a style of absurdist comedy. They initially frame many of the characters as goofy or buffoonish. Gene Cousineau, Fuches, and Sally in the earlier episodes simply come across as eccentrics, but gradually the characters become distinct personalities as their own desperation and desire comes to the surface. “Do not fucking tell me what I am”, a character screams, which forebodes the different facets of the supporting characters. Each of them reveals real emotions unanticipated for their roles, placing them away from conventionality (Sally, played with gusto by Goldberg, is equally heartbreaking and annoying when she’s single-mindedly driven by her ambition). Even Gene and detective Moss’ hilarious courtship begins in a farcical note, but the creators slowly squeeze out genuine warm feelings. Both the members of Chechen and Bolivian gang pretty much remain as caricatures, but their ability to play for laughs without understating their characters’ cutthroat attitude keeps those portions deliciously entertaining . Carrigan and Fleschler are exceptionally good as they keep on bumbling through comedy of errors.

In spite of the quirky, dreamlike quality 'Barry' is punctuated with extreme violence. And the violence become less sporadic and more horrific as our awkward hit man gets entrapped within his self-delusion. What the decidedly unambitious Barry dreams of is being a family man, leading a boring life in the suburbs. He wants the perfectly banal American dream with all its idealized version of happiness. In the couple of early episodes, Barry’s shared humanity, loneliness, and passion took him close to an appealing figure; where he almost convinces us that the past is just ‘water under the bridge’. The intriguing narrative through line is Barry’s longing to leave his past reprehensible actions behind. However, the later episodes crisply present the unraveling although Barry, embracing the delusional beliefs, still thinks of himself as the good, decent guy. In fact, he is most dangerous than the villainous alpha-males portrayed on-screen. The manner with which Barry sees himself in the character of Macbeth (without ever feeling the guilt or remorse of Shakespearean characters) tells a lot about his line of thoughts. Unlike the lone assassin who killed for money, the allegedly reborn Barry doesn’t want to hurt people. At the same time, he doesn’t want his unsavory past to catch up and hurt him. Hence his current sociopathic exploits are loaded with new sets of reason. 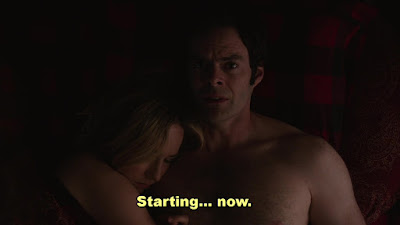 ‘Barry’ also balances the satire on the vapid, narcissistic life-style of Hollywood or L.A. theater culture with the noir tendencies. I loved the way the first season ended. Half-way into the final episode, we feel it’s all too good to be true. Then the fascinating twist arrives. As the visibly-shaken Barry finally crawls into bed next to his girlfriend Sally, and says to himself, “Starting n….”, before the screen fades to black, it felt like a perfect, dark ending. But since HBO has picked it for another season, it would be interesting to see Hader and Berg’s long-term vision for the character. The direction by Bill Hader is unshowy but impactful and efficient. The couple of episodes directed by Hiro Murai (‘Atlanta’) brings up the series most imaginatively rendered set-pieces (particularly the ‘bum rush’ sequence). ‘Barry’ isn’t without flaws. A good number of plot developments repeatedly defy logic (especially the unbelievably uncompetitive investigation of the police). Some of the characters are cooked-up to serve the series’ convoluted narrative mechanisms: for example, the inclusion of Barry’s military friend Chris. The acting class members are defined by their quirkiness and as the show progresses they are simply treated as props (D’Arcy Carden of ‘The Good Place’ fame is wasted in a thankless role).

Barry (2018--) assuredly walks a tightrope between absurd flourishes of dark comedy and deepening sense of tragedy. It takes our unwavering fixation for TV bad guys to entirely new levels.

at May 18, 2018
Email ThisBlogThis!Share to TwitterShare to FacebookShare to Pinterest
Labels: Black Comedy, Thriller, TV series