Diamonds of the Night [1964] – A Startling Exploration of Distressed Minds

Jan Nemec’s Diamonds of the Night (Demanty noci, 1964), one of the marvelous original works of Czech New Wave, is a purely visual cinema. There are very few lines of dialogue in this 64 minute movie. Yet, we can comprehend the stark emotions on-screen and harvest its devastating impact without the need for subtitles. Diamonds of the Night is based on Arnost Lustig’s autobiographical short novel ‘Darkness has no Shadows’. It chronicles the tense journey of two Czech Jewish teenagers fleeing from a train that's bound for a concentration camp. Twenty-eight year old Jan Nemec just chose the central scenario as the subject matter of his directorial debut and said to have cast aside all the other details from the novella. The result is a magnificent expressionistic work, similar to old German silent films. The rough, dynamic monochrome cinematography, dazzling sound design, and disorienting but wondrous juxtaposition of the imagined past doesn’t allow for any sort of refuge to be taken in this bleak world. 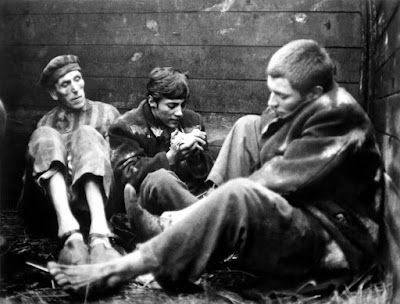 Unlike the Czech New Wave directors like Milos Forman or Ivan Passer, Jan Nemec didn’t make slice-of-life dramas to showcase the realities behind the Iron Curtain. He rather took a metaphorical approach and employed unique expressionistic film-form to achieve the same result. In Diamonds of Night, Nemec approaches the objective reality regarding the Jewish boys’ survival through a narrowly focused subjective perspective. Director Laszlo Nemes was recently hailed for using the portrait-like narrow field of vision to explore the holocaust in Son of Saul. This approach narrowed the subject’s world down to his immediate surroundings. The constricted world-view, ironically, creates depth of feeling as opposed to the sweeping but eventually meaningless or annoyingly sentimental Holocaust-themed Hollywood films.  The agonized hand-held camera movements of the renowned Czech New Wave cinematographer Jaroslav Kucera (Daisies, Fruit of Paradise) in Diamonds of the Night, made five decades before Son of Saul, places us in such a forced perspective, giving the space to both empathize and deeply reflect on the boys’ predicament. Miroslav Hajek’s editing and Bohumir Brunclik’s sound effects also plays a important role in laying bare this extreme human experience.

The film opens with the shot of two boys (Anotonin Kumbera and Ladislav Jansky) running into dense woods as the sounds of moving train and gunshots are heard. The jittering hand-held shot (a single, continuous shot) commences from objective point-of-view and slowly gets closer and closer to the boys (running with labored breathing), bringing their exhaustion, fear and hunger as the foremost elements. Except for the letters ‘KL’ -- Konzentration Lager or Concentration Camp – painted in white on the backs of the boys’ black coat and odd shots of men in Nazi uniforms and Jews in striped pajamas, much of the details about the historical period is eliminated. So, Nemec’s film isn’t just a vital work in the Holocaust cinema, but also becomes a great abstract story of young ones, repeatedly condemned by the grim world, run by jubilant and apathetic old men (the local hunting squad, full of old men boasts enormous power over the two helpless teenagers). Director Nemec briefly and repetitively mixes images and sounds from the boys’ memories and possible imaginations. Unlike the traditional flashback methods, these brief sojourns to the past don’t give us any clear idea about the boys’ life. The small beams of brightly visualized memories contrasts from the dark shots of the escape and survival in the woods. The sunny shots of calm neighborhood and streetcars seem to represent the daydreams or possible hope for the boys that keep pushing them to survive the bleak situation. These fragmented images are also perfect representation of the escapees’ psychological state (an attempt to keep away harsh experiences of cold and hunger through fragmented recollection of memories). 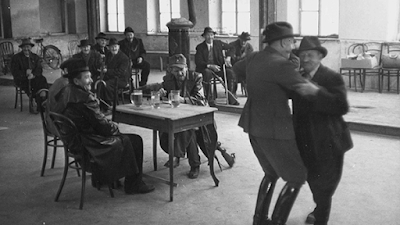 Apart from ambiguous flashbacks, Nemec also spectacularly employs flash-forwards, which alternately confuses as well as illuminates about the boys’ mindset. In one scene, the boy looks at a woman, standing in her kitchen, looking forward to attain some food. Nothing is spoken, but the boy repeatedly imagines on what to do with the woman, who may report him to the brutish authorities. His mind conjures up the idea to accept the bread and strike her down. We are kept in a tense state, wondering whether the boy will succumb to the basest of instincts (the reason that he doesn’t surrender to the instinct works against him). Then there’s another interesting flash-forward sequence towards the end, where we aren’t sure about the boys’ fate. Altogether, the surrealistic use of memories and imaginations serves in opposition to the boys’ bodily movements through the thick forests. While the memories fleetingly free them from agonized existence, the perpetual motion through the woods only keeps them in perpetual confinement. Their walk into the expanse of darkness, brushing off thicket of dead tree branches doesn’t diffuse strength and hope as compared to bright flashes of the past. 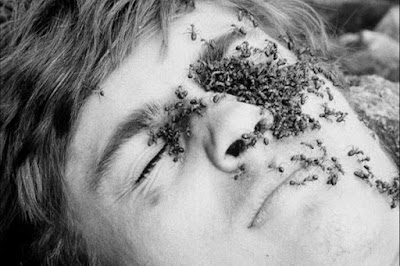 Cinematographer Jaroslav Kucera and director Nemec primary intention is to trap the viewers inside the boys’ feelings. It’s a precise, subjective reconstruction of what it must have been like for the Jewish boys on the run from the humanity’s worst. Nemec conveys the characters’ ordeal in vivid, small details: the pitiful state of their shoes; clumsy brushwood shelter; the coarse bread hurting their sore mouth; a colony of beetles swarming over a boy’s hand that leads to his confusion over reality (a sort of Bunuelian touch). Nemec’s portrayal of the drunken posse, full of old men, speaks of the true horrors of Nazism. It portrays the beastliness of ordinary people when confronted with fascist ideals. The ruthless old men enjoying power could also be seen as a commentary on political establishment (all over the world), run by men with archaic views, and one which repeatedly persecutes young people.

Diamonds of the Night (64 minutes) is one of the audacious directorial debuts in the history of cinema. It’s a subtle exploration of Holocaust themes, without ever placating its solemn tone with sentimental refashioning.