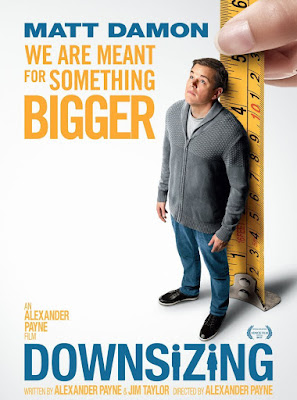 The first 40 minutes of Alexander Payne’s Downsizing (2017) is nothing short of spectacular. It starts off as an ambitious sci-fi that satirically jabs at white privilege, mass consumption, social inequality, environmental degradation, etc. Taking into account the previous commendable works of Mr. Payne, the master satirist of American society (to say exactly, the Midwestern culture), it is natural to expect him to address the intriguingly laid-out premise and themes with great depth and alacrity. But the narrative doesn’t quite take a leap, laboriously hopping from one idea to another without fully exploring any single one. What’s more conspicuously missing in Downsizing is Payne’s trademark acerbic wit and profound display of human empathy.

Alexander Payne and his regular co-writer Jim Taylor deserves praise for crafting a studio feature that tackles the inevitability of global warming and ponders upon the fundamental inequalities, regardless of humankind’s noble intentions and higher ideals.  At least for the first hour or so, Payne and Taylor explore their preoccupations with vigor and acute observations which gradually broadens our marvel about this sci-fi premise. A genial Norwegian scientist named Dr. Asbjornsen (Rolf Lassgard) invents a method to shrink human beings to about five inches. For half a decade, he and handful of people shrink themselves and lead a life without worrying much about carbon footprint. The scientists’ findings revealed in a surprising press conference: a tiny man at a tiny podium, placed above a normal-sized podium addresses the dumbfounded macro humans. The goal of the shrinking, of course, is presented as a way to curb climate change, as Dr. Asbjornsen’s ‘big’ colleague reveals how a tiny colony of people’s waste (for 5 yrs) could be fit into large plastic bag. Within the next few years, shrinking becomes both a lifestyle craze and ‘save-our-planet’ advocacy. 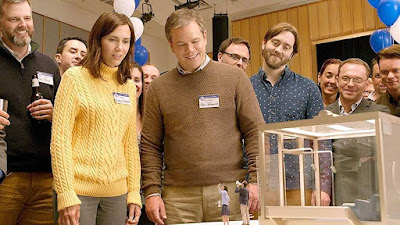 Few years later this technology has been fully commodified in America. Old people consider retirement in the form of tiny person, since being full-sized doesn’t bring much luxury. Moreover, a good portion of Middle-class Americans are coaxed to downsize themselves through freshly inaugrated lilliputian utopian communities. When one is just five inches tall (0.0364 percent the size of their full-sized counterparts), everything including food and material needs, gets smaller. Not only one could save the planet, but by trading their limited nest eggs, middle-class families could lead a life of great wealth in downsized worlds. Moreover, being small doesn’t affect citizenship or right to vote. At least that’s what the brochures of different tiny communities say. Of course, before consenting to miniaturization one should also understand that there’s no way to reverse the process. All such intrigues of the commoditized scientific invention are gracefully observed through the perspective of Paul Safranek (Matt Damon), a physical therapist and an average-American nice guy and his bored, irresolute wife Audrey (Kristen Wiig). 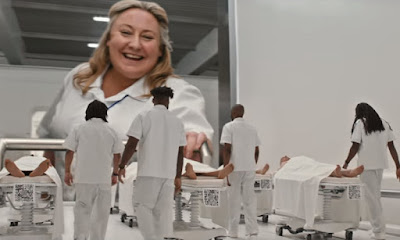 The pressure of taking care of (now-deceased) mom has affected Paul’s pre-med studies. He’s only an low-paid occupational therapist and hasn’t been able to buy his wife Audrey the home of their dreams. Taking the words of a recently downsized friend, the couple visits ‘Leisureland’, a lavish, crime-less suburb for the shrunken people. They learn that their equity will radically enlarge once they become small. Paul’s mid-life crisis and perpetual failures in life naturally pushes him towards this dreamland. The dates for downsizing are all set. It leads to the film’s most brilliant scene, the detailed process through which a person gets small: dental work undone since fillings can’t shrink which can literally make your head explode; row of people are sedated and nakedly lie on a stretcher, before being placed inside a well-lit chamber (the levers pulled and knobs turned outside the chamber could very well kindle the images of Nazi gas chamber); and finally the room full of downsized people are moved to tiny stretchers using spatulas (cinematographer Phedon Papamichael has done a magnificent job in this scene). Just when Paul thinks his blissful life chapter is about to begin, he learns that Audrey has had a change of heart.

The ‘Leisureland’ might be miniature in size, but it’s pretty much a mirror image of larger flawed society (a literal microcosm), with the same bureaucratic apathy, inequity, inequality, immigration problems and so on. In countries that are less democratic, the downsizing method is used upon the impoverished, dissidents, activists, etc. Paul Safranek hears this appalling news from his new huge mansion. However, a year later we see him working in a corporate cubicle and living in a teeny-tiny condo (the divorce probably has pushed him into this lucrative financial position). Paul is once again leading a drab, boring life. From then on, the narrative tries to make grand statements on poverty, exploited workers, compassion, cults, inevitable destruction of human race, without ever sharply focusing on the themes. What’s more worse is the dry characterization of Paul. Unlike Alexander Payne’s consistently thorough look at the existential malaise of middle-aged or old American Midwestern men (in Election, Sideways, About Schmidt, The Descendants, and Nebraska), Downsizing’s Paul simply comes off as a punchline, and that too a very tedious one. He is so noncommittal and impassive to make any considerable impact in the proceedings. 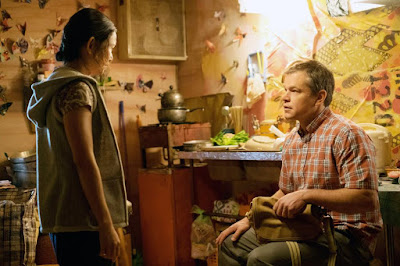 Payne and Taylor’s highly ambitious ideas not only fail to take root, they totally fumble with the task of creating an interesting point of view. Christoph Waltz’s amoral yet charming black marketeer Dusan looks like a vibrant character, but eventually gets lost in the convoluted story structure. Hong Chau’s self-determined Vietnamese refugee Ngoc Lan Tran (who was shrunk against her will for protesting against the government) could have been the much-needed relief from Paul’s passive nature, but her character too verges on caricature and almost reduced to a dramatic device. Hong does provide a very committed performance, but somehow the latent romance between Tran and Paul isn’t built up with earnestness. In films like Nebraska and About Schmidt, Mr. Payne took story-lines rife with sentimentality and conceit to turn it into deep, unflinching examinations of human condition. But Downsizing’s later portions are plagued with cheap sentimental turns and dramatically slack ideas. And despite the vast thematic constructs, Payne’s ultimate message is pretty simple (being compassionate to the less fortunate is pivotal than our preoccupations about survival of human race or obsession over utopian society; and Payne usually don’t give messages, but simply raises ponderous question) so as to not warrant these rough narrative twists.

By the time, the narrative moves to ‘shrinking procedure’ scene, Downsizing comes closer to John Frankenheimer’s under-appreciated masterpiece Seconds (1966). That film tackled the dark ironies of human condition alongside the era's highly politicized notions through the well-defined subjective angle of a existentially scarred middle-aged banker. Payne and Taylor’s script, however, moves between individualistic and broader perspective, utterly failing to balance between the two. Downsizing (135 minutes) is definitely a disappointing movie from one of the great contemporary American film-maker; partly because the audacious story elements never coalesce to form a powerful sci-fi satire. It’s a lesson on how good intentions and challenging concepts could be easily marred by weak execution.

at May 29, 2018
Email ThisBlogThis!Share to TwitterShare to FacebookShare to Pinterest
Labels: 2017 Movies, Satirical Movies, Social Drama