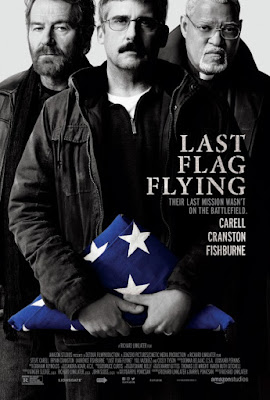 What makes Richard Linklater’s movies great are the flashes of nuanced, understated & unforeseen truths bestowed upon viewers, which could be easily mistaken as canonical babbling of the grown-ups. The indie film-maker’s latest feature Last Flag Flying (2017) does retain the casually profound reflective mentality and tragicomic tone to instantly forge an emotional connection. At the same time, the final product seems a little heavy-handed and unrestrained, compared to Linklater’s other masterful intimate epics. The problem is more with the familiarity of its subject matter than with Linklater’s intuitive directorial approach. Yet Last Flag Flying is definitely engages us throughout its running time, thanks to superb central performances from Steve Carell, Bryan Cranston, and Laurence Fishburne.

Last Flag Flying is based on Darryl Ponicsan’s 2004 novel of the same name, which is a sort of sequel to the author’s 1970 novel The Last Detail (it was adapted to screen by Hal Ashby in 1973). Set in 2003, the story follows three Vietnam War veterans making an unexpectedly meditative journey across atrophied post-9/11 American landscape. The Last Detail was about two U.S. Navy sailors escorting a shy, young sailor to military prison. Linklater’s movie returns to some of the emotional terrain broached by the 1973 movie, although Ashby’s movie possessed a more profound atmosphere of bleakness. Of course, it isn’t compulsory to watch The Last Detail to understand the emotional dimensions of Linklater’s movie (Linklater has given the characters different names and slightly altered their backstories). Last Flag Flying works perfectly as a stand-alone feature and if I need to point out one area in which it excels like Ashby’s movie, then it must lie in shrewd establishment of emotional dynamics between the three principal characters. 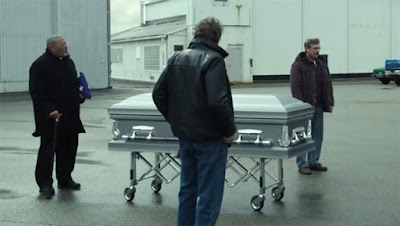 Since the time Darryl Ponicsan wrote this book in 2004, there has been steady stream of films that ingeniously dealt with Iraq war from the home-front perspective. Of course, dangerous propagandist works like American Sniper, Lone Survivor continues to be made for every genuinely painful features like In the Valley of Elah or The Messenger. Linklater’s adaptation is definitely a somber work that addresses agonizing emotions which haunts individuals existing miles apart from the sandy battlefields, without sanitizing or misleading the nature of this particular war.  Nevertheless, despite the director’s minimalist streak, the very familiar narrative makes the movie too simplistic and flaccid. The screen adaptation may have more resonant if it was made a decade or so earlier. Last Flag Flying opens in 2003, in a crowd-less seedy bar, situated in the run-down part of Norfolk, Virginia. Shy widower and former Navy medic Larry “Doc” Shepherd (Steve Carell) shows up unannounced at the bar owned by happy-go-lucky boozer Sal Nealon (Bryan Cranston). Sal is Doc’s old Marine buddy and together they go to visit another Marine buddy Richard Mueller (Laurence Fishburne), an erstwhile wild guy who is now a pious pastor.

There’s a reason for Doc reaching out his old buddies after all these years: he needs their company to travel and receive his dead son, Larry Jr.’ coffin.  Doc’s only son was also a marine, killed in action in Iraq. He is to be buried with full honors at Arlington National Cemetery. However, after arriving at the destination and confronting the military outfit’s dishonest behavior, Doc has a change of heart and decides to bury his son back home in New Hampshire. The rest of the narrative is about the three middle-aged men’s roundabout journey – who are also accompanied by Charlie Washington (J.Quinton Johnson), a young lance corporal and Larry Jr’s best friend – which is embellished with philosophizing or soliloquizing vignettes. There are also the boisterous, Linklater-esque scenarios of uncynical male bonding.

Last Flag Flying doesn’t exactly feels outdated as its reverential attitude towards the courage & patriotism of troops and ambivalent attitude towards the corrupt establishment that sends citizens into battle is expressed in a solid manner. But compared to the unfeigned, realist works of Linklater, this one feels wholly schematic and awkwardly self-conscious. Themes are overtly spelled out or dissected, and the usually organic Linklater-esque conversational flow mostly ends up as contrived sermons. It may be deliberate and Last Flag Flying might be the most mainstream work after the director’s 2003 comedy The School of Rock (which I very much enjoyed). However, the problem with this film is not just the conventional story-line, but also the lesser developed characters and overtly dramatized conflicts. Barring few powerfully written scenes, the three central characters never hits the transcendent note that turns them into real people (especially the proceedings doesn’t get deep into the head of Doc). It is true that Carrell’s amiable presence, Cranston’s enjoyable hysterics, and Fishburne’s laconic resolve (and their bromance) keeps us engaged throughout, but the characters doesn’t exactly stay with or haunt us after the denouement. The arguments over buying mobile phones or the discussion of generational schema provides some incidental pleasures, although what I earnestly hoped for is quietly shattering drama. On the whole, Last Flag Flying (125 minutes) couldn’t be dismissed as a bad movie, even though it is strictly conventional and slightly bland. While, it’s not the subtlest Richard Linklater movie, it’s still undeniably watchable.

Richard Linklater is a director who picks up themes, and each movie is quite different from the previous one. I have always enjoyed his cinema, especially the dialogues – the whole naturalness of it. And, I enjoyed the conversations and performances in the ‘Last Flag Flying.’
There were more things I liked about the movie than I disliked. It does not match to some of his other works, but a fine watch nevertheless.
Seema - Artist & Writer
Lonely Canopy