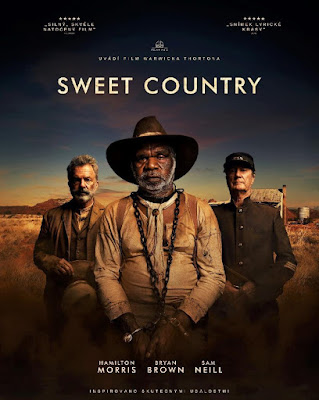 Aboriginal Australian director & cinematographer Warwick Thornton’s subtle and unnerving directorial debut Samson and Delilah (2009) won the prestigious 'Camera d’Or' for best first feature film at the Cannes Film Festival. It was a fascinating study of the indigenous community, its identity, and the irreparable aftershock of colonization. Now his latest film Sweet Country (2018), a melancholic outback western, explores the fractured white-Australian national identity, the institutionalized racism, and the dehumanization plus disenfranchisement of the native populace. Sweet Country is also a remarkable character study, chronicling one oppressed man’s fight to survive in an unforgiving world. Director Thornton evokes the gorgeous visual tropes of classic Westerns, made by John Ford and Howard Hawks. But at the same time he eschews genre conventions and never shies away from pointing out how the Australian national identity evolved through the brutal appropriation of Aboriginal bodies, places, and culture. You could say that it’s an angry film, which enunciates the prejudice and violence that happens to have laid the foundations of modern Australia. But the rage is expressed in a nuanced manner, making it foremost ‘a good cinema’ and not just ‘a indigenous movie project’.

Based on a true story, this slice of Australian frontier history is set in its Northern territories in the late 1920s. The movie begins with a prolonged close-up shot of a boiling cauldron as we hear a fight breaking out between a white master and a black (aborigine) farmhand. It’s one of the many foreshadowing techniques Thornton employs to warn us of the inevitable brutality in this wilderness. Compassionate preacher Fred Smith (Sam Neill) lends his Aboriginal stock-man Sam Kelly (Hamilton Morris) to the odd new neighbor Harry March (Ewen Leslie) to work on his cattle station. March is a PTSD-afflicted war veteran and an alcoholic with a vicious temper. Sam takes his wife Lizzie (Natassia Gorey Furber) and young niece to work on March’s farm. The bigoted March’s behavior instills unsavory experience for Sam and his wife. 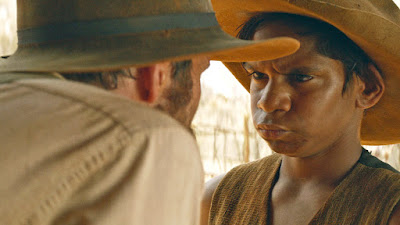 On a neighboring farm lives Mick Kennedy (Thomas M Wright), yet another brute, who has a mixed-race son Philomac (played alternately by twins Tremayne and Trevon Doolan). Philomac defies his master every chance he gets and sets off a chain of events that leads Sam to gun down mad March in self-defense. Sam has a good understanding of what he would be subjected to for shooting a ‘white fella’ (even in self-defense). So he and Lizzie go on the run. Meanwhile, a hotheaded police Chief Sergeant Fletcher (Bryan Brown) leads a posse to hunt down Sam. The posse that chases after Sam comes across conflicts and soon the hunter-hunted dynamics undergoes a change. Nevertheless, Thornton never leaves us in doubt about Sam’s fate. Tolerance, justice, culpability, and empathy are far-fetched concepts in these weather-beaten lands, where human minds are poisoned by institutionalized racism. 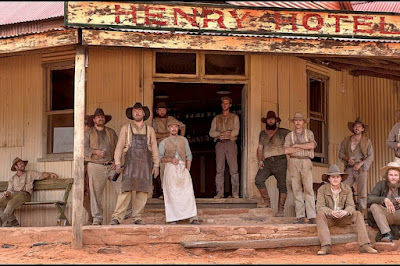 Screenwriters David Tranter and Steven McGregor’s depiction of Aboriginal characters doesn’t make them one-dimensional good people. On one hand soft-spoken Sam’s spiritual connection to the country is evoked. On the other hand, there are indigenous characters like Philomac and Archie (Gibson John) who aren’t helpless victims and are rather driven to do or say anything to save their own skin. This de-romanticized portrayal of Aboriginal characters is pivotal to understand the aftermaths of slavery and colonization, where there isn’t a simple preordained category of ‘innocent natives’ and ‘brutal whites’. Archie, the Uncle Tom-type, is particularly an interesting character whose utterly submissive nature invalidates our easy moralizations. While Thornton zeroes-in on Aboriginal’s fear and lack of faith in white-man’s system, he also doesn’t forget to showcase the mood of insecurity and unease in the minds of white settlers. The white men’s inner conflict was very well fleshed-out as much as the tribal native people. Mick initially comes across as a villain like Harry March. But in the end he looks like a pathetic guy, never feeling at home in this relentlessly harsh landscape. Even Sergeant Fletcher doesn’t withhold one-note villainy and his impulse to avoid vigilante justice is unexpected. Thornton often counters the white community’s bigotry by the rare yet vital expression of empathy. The compassionate judge delivers true justice in the form of a fair trail. Nevertheless, individualistic expression of empathy is swiftly over-turned by the establishment hell-bent on ostracism, which gradually strips away the native’s rights, lands and bodies. 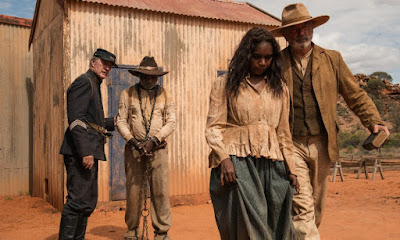 Warwick Thornton makes good use of the flash-forwards pointing to the stark events that are waiting to hit us on a gut level. It would be ridiculous to say that these flash-forwards makes things predictable; as if we could expect anything different in a system built on hate and distrust. Similar to Lynn Ramsay’s recent riveting drama ‘You Were Never Really Here’, these fleeting shots showcase the never-ending trauma stitched throughout time and history. The harsh beauty of outback is something repeatedly mentioned from the days of Wake in Fright & Walkabout (both released in 1971). So, it’s no wonder that Thornton captures the landscape in all its glory. There are few interesting ironical glimpses at white-Australian identity. It’s overtly evident in the scene where people of the lawless town watch 1906 silent film ‘The Story of the Kelly Gang’. They are enchanted and empowered by the violence of the famous criminal figure, but they want to hang a ‘black-fella’ [who also has Kelly in his name] for shooting in self-defense. The performances throughout the film are brilliant with Morris, Sam Neill and Brown adding extra layers to their characters. Morris and other Aboriginal characters are played by non-professional actors who lend a fine authenticity to the proceedings. Thornton takes a less-is-more approach with Morris whose calm presence imbues a strong tone of tenderness and dignity to the narrative.

Sweet Country (113 minutes) is a nuanced discourse on the trauma and suffering experienced under colonialism and systemic persecution. The slow-burn design may frustrate some viewers, but this understated sociopolitical drama is visually stunning as well as deeply emotional.

at July 25, 2018
Email ThisBlogThis!Share to TwitterShare to FacebookShare to Pinterest
Labels: 2018 Movies, Films from 'Down Under', Social Drama